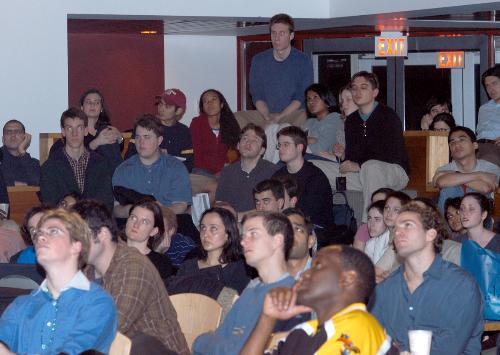 In an address from the White House last night, the president pledged that the United States would invade Iraq unless Hussein and his sons go into exile by Thursday morning Baghdad time.

Bush justified the move by raising the possibility of Hussein turning over weapons of mass destruction to terrorists.

“Before the day of horror can come, before it is too late to act, this danger will be removed,” Bush said.

If Hussein does not leave power, Bush said military action would start “at a time of our choosing.”

In the Kennedy School of Government’s ARCO Forum, about 70 students watched the Bush’s address with “gravity,” according to Joe Green ’05, chair of the Harvard Political Union.

“At the last speech [Bush delivered] on Iraq, everyone was cracking up,” Green said. “But at this one, there were not too many laughs.”

The undergraduate response to Bush’s speech was overwhelmingly negative in a discussion held in the Kirkland House Junior Common Room last night.

The discussion was moderated by Lecturer on the Study of Religion Brian Palmer ’86, who teaches Religion 1528, “Globalization and Human Values: Envisioning World Community.”

“My gut reaction was a growing sense of dread and horror that this was being done in my name,” said Megan Crowley ’05, who attended the Kirkland House discussion.

Palmer said he feels that the Bush Administration has not exhausted all alternatives to war.

“I think that a transformation could be achieved by other means. In class today [MIT linguistics professor] Noam Chomsky made the point that all the most successful transitions to democracy are made from within by a nation’s own people,” Palmer said.

A spokesperson for the Harvard Republican Club supported Bush’s position, while the president of the Harvard College Democrats said that Bush had not made the case for war.

“At this point it seems that Bush has exhausted all alternative means,” said Mark Silvestri ’05, who is secretary of the Harvard Republican Club. “We believe that Iraq needs to be liberated from its oppressive dictator.”

Silvestri added that the club would be planning a “support the troops” rally soon.

R. Gerard McGeary ’04, president of the College Democrats, said he felt that Bush should have allowed more time for Iraqi weapons inspections and worked harder on building an international coalition.

“We still stand by our position opposed to war…but it’s very important that we stand by our soldiers as well,” he said.

An anti-war walkout of classes is scheduled to occur on Thursday—the day the bombing may begin—according to Amy Chew ’04, a member of the Harvard Initiative for Peace and Justice (HIPJ).

Chew said she felt that HIPJ’s anti-war efforts and others like it will have made a difference, despite Bush’s decision.

“The fact that there was and is tremendous opposition gives me hope that [the war] will be fought under heavy scrutiny,” Chew said.

The Eliot House Committee will sponsor an open mike discussion on Iraq on Wednesday Night at 10 p.m. in the dining hall.

—Staff writer Mike Mohammed can be reached at mohammed@fas.harvard.edu.