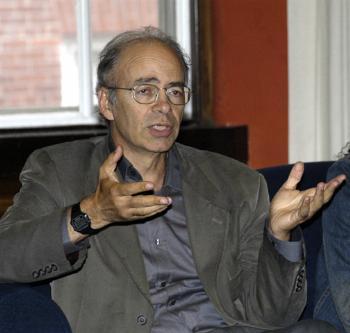 PETER SINGER tells listeners that animals can feel pain and must be treated as entities, not objects, in Adams House yesterday.
By Yailett Fernandez, Contributing Writer

Students should heed animals’ “preferences” and not treat them as objects, according to a controversial Princeton bioethicist who spoke at Adams House yesterday.

PAW’s founder, Geri A.A. Lake-Bakaar ’03, introduced Singer to the group of about 25 students as “the father of the modern animal rights movement.”

Singer said he decided to write Animal Liberation, one of the most important books of the modern animal rights movement, after learning about animal suffering in factory farms and research labs.

“People will reduce suffering if they can do so at little cost for themselves,” he said.

Preventing “unnecessary suffering” for any species that can suffer is “the major issue,” Singer said, arguing that since birds and mammals also can feel pain, humans should not be given special consideration.

Though he is well respected in the field of animal rights, some have criticized Singer for his views on humans with disabilities discussed in his 1993 book Practical Ethics.

In the book, Singer advocates giving parents of infants born with certain severe disabilities the choice of ending their children’s lives.

One student yesterday asked Singer to reconcile this view with his animal rights activism, citing an article published last month in The New York Times Magazine which criticized Singer for supporting “selective infanticide.”

Sometimes, humans suffer more than animals due to the commonly held view of the “sanctity of human life,” he responded.

When another student asked who should decide when a human life is not worth living, Singer said a variety of factors must be considered.

And for those who have never been capable of making their own decisions, Singer said that family and doctors should make an informed decision, taking into account what would be best both for the individuals and their families.

Singer, an influential though controversial philosopher, said that he wants “to hand the decisions back to those [they are] going to affect most.”

As a utilitarian more concerned with the satisfaction of “preferences” than with happiness, he argued that for beings with preferences, it is best if their preferences are satisfied.

Roxanna K. Myhrum ’05, a lifelong vegetarian who attended the event, said she came to see how Singer would answer philosophical questions in person. At the end of the discussion, Myhrum described Singer’s responses to student questions as “consistent and satisfying.”

Lake-Bakaar and Holly B. Anderson ’06, who will serve as PAW’s president next year, organized the event.

Students in the course finished reading Singer’s book, One World, this week, and Singer will speak to the class at 3 p.m. today in Science Center B.