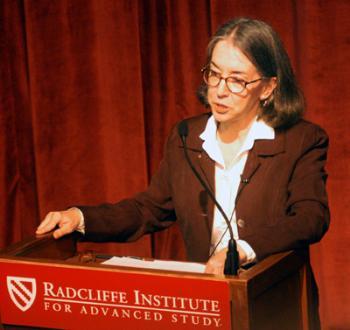 CAROLINE WALKER BYNUM lectures at the Radcliffe Institute for Advanced Study on violence in the religious imagery of the Middle Ages.
By Ella A. Hoffman, Crimson Staff Writer

During the Middle Ages people routinely imbibed the blood of executed criminals who repented before they died, renowned medievalist Caroline Walker Bynum said in speech yesterday at the Radcliffe Institute for Advanced Study.

Bynum spoke to a packed house on concepts of redemption and suffering that emerged in twelfth and thirteenth century Europe.

She began her lecture with a crash-course in the relevant history of theology including the evolution over time of the linchpin concept of Christianity—the crucifixion.

Different views of the crucifixion are emblematic of varying perceptions of the relationship of humans to God, Bynum said.

During the 13th through 16th Centuries crucifixion came to be seen as “an example of self-sacrificing love”—the ultimate example of what it means to love one’s neighbor, she said.

“Christ interposes himself as a shield between us and God,” Bynum said.

This notion developed the idea of penal substitution. This became problematic, Bynum said, as society began to blame itself for the necessity of this action.

The result was two very different understandings of crucifixion.

“Self sacrifice as inspiring love spills over into the violence of religion in the Middle Ages,” Bynum said.

This notion may be better understood as “blood piety,” she said.

After grounding her audience with the basic background, Bynum traced the emergence of violence and pain in religious imagery.

Exploring what modern historians have termed “popular piety” and vernacular theology,” Bynum described the increased prevalence of blood, bloodletting, and pain in documents and sources of the late Middle Ages.

She cited the tale of 12th century monk Eversham Abbey, who was said to have seen Christ bloody in heaven and attempting to drink his own blood while in a trance.

That the monk would dare to swallow Christ’s blood, that this act would engender joy and the notion that Christ would be bloody and disfigured in heaven, she said, testifies to the violent turn religion took during the Middle Ages.

The increased focus on blood ties into the Medieval tendency of concomitance—the mistaken belief that a part is equal to the whole, Bynum said.

This belief made it possible for people in the Middle Ages to believe in relics and that one’s “neighbors were subsumed into one’s own suffering,” Bynum said. “However, they were not sure how far they could spread their suffering to others.”

Bynum concluded by saying that these themes, which first appear in the late Middle Ages, are still present in perceptions of Christianity today.

“Today theologians find it difficult to think behind Medieval ideas of Christianity,” Bynum said. “It is difficult for non-Christians or post-Christians to see that Christianity has not always been this way.”

Bynum is currently a professor of European medieval history at the Institute for Advanced Study in Princeton, NJ and is a university professor emerita at Columbia University. She taught for seven years at Harvard, holding posts in the history department and at the Harvard Divinity School.

Bynum received her doctorate from Harvard University in 1969.

—Staff writer Ella A. Hoffman can be reached at ehoffman@fas.harvard.edu.