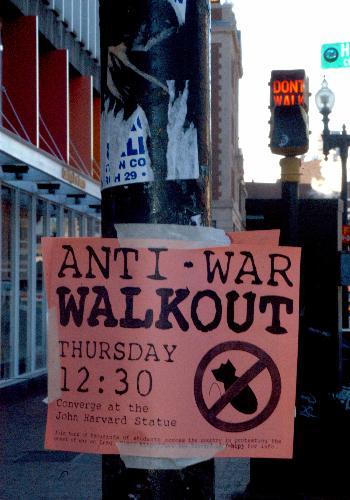 Last night, as the bombing began in Iraq, students across the University—in the midst of mid-terms, the housing lottery and pre-spring-break stress—put down their books to watch President Bush’s much-anticipated announcement of war.

At Harvard, the outbreak of hostilities was marked by impromptu open-microphones, common room discussions and groups huddled around television sets across campus to hear Bush’s announcement of war at 10:15 p.m.

“The time for international dialogue may be past, but the time for dialogue within the University has only begun,” Dean of the Faculty William C. Kirby wrote in an e-mail last night.

University President Lawrence H. Summers said last Friday that despite his hopes for peaceful resolution, in the event of armed conflict, he expected Harvard students to be tolerant of each other.

The outbreak of war was met on campus with a wave of response, both ideological and personal.

“On e-mail lists and in the dining halls, faculty and students are really coming together and talking about this,” Undergraduate Council President Rohit Chopra ’04 said.

“Universities have always been a hub of viewpoints on both sides and we are all young. It’s good that we are being trained here to have independent minds,” he added.

In the first major protest since the outbreak of war, the Harvard Initiative for Peace and Justice (HIPJ) has organized a campus-wide walk-out from classes today.

The group’s leaders said they expect more than 1,200 undergraduates to march from the John Harvard Statue to MIT tomorrow at 12:30 p.m.

HIPJ members desperately made phone calls to all 1,200 students signed up to walk out last night, asking them all to do their best for peace.

Members of HIPJ took a break from preparing their posters and buttons last night to watch the speech together in the basement of Mower Hall.

“We all knew it was coming, but it was still a terrible thing to hear...It was exactly what I had expected...serious propaganda and blatant lies,” said Michael J. Getlin ’05.

Mark T. Silvestri, president of the Harvard Republican Club, said that HIPJ members “are generally being shortsighted and closed to the real discussion of the issues.”

The club has planned a different response to the war: possibly rallying in support of troops and soliciting students to send cards to the troops after spring break.

Gathering together last night for a regular board meeting, members of the HRC watched Bush’s announcement together in Loker Commons.

“It was a statement of what we knew already had to happen. So the tone was somber, but confident,” Silvestri said.

Even for those who did not closely watch Bush’s speech, it was a night for discussion.

Groups of first-years traveling from House to House last night in the hopes of ensuring the ideal abode for the next three years stopped to discuss the war.

“I am disappointed that our president failed so miserably at diplomatic efforts,” said Andrew C. Stillman ’06, campus outreach director of the College Democrats.

For some students, the war is more than a distant threat.

For the approximately 50 Harvard undergraduates participating in the Reserve Officers Training Corps (ROTC), the war presents the possibility that they might have to join the conflict and promotes a stronger connection to those fighting abroad.

The war also means that hostility directed toward the military in general could spill over into ROTC ranks, yet the cadets still met Bush’s speech with confident support.

None of the ROTC members will have to go abroad this year, since the period of enlistment begins after graduation. And most, judging by the length of the 1991 Persian Gulf War, are not very worried about the call to arms.

“This is not really an issue to me. I don’t think about it too much,” said Jeffrey C. Munns ’03, a midshipman and president of Harvard’s National Defense Forum, a group dedicated to discussing issues of the national military.

“I think on both sides the points are sometimes valuable, but more often than not are just about making a point rather than having a disucssion,” he said.

ROTC cadets, many of whom also participate in the National Defense Forum, will be sending postcards to the troops abroad, and selling ribbons to show support.

Peter H. Brooks ’06, a midshipman from Weston, Mass., challenged the image of the “militaristic, hair-trigger people” that he says many associate with ROTC.

“War is a terrifying thing and I pray every night that Iraqi forces will lay down their arms,” Brooks said. “Nobody in the military wants to go to war but at times it seems the best course of action.”

Brooks himself has changed his habits. As a Navy midshipman, he was required to wear his uniform to classes every Monday. But fearing the backlash against the war and the U.S. armed forces, he says he has been instructed to keep the uniform in his closet until further notice.

But Brooks, who attended last week’s anti-war rally in front of the Science Center to observe, said that he does not mind the protests.

“I am a firm believer that the protestors are a main thing we are fighting for. That freedom of expression...is worth fighting for,” he said.

As students debate the ideology of the war, administrators are tackling practical issues of campus security.

In Cambridge, several teams of planners have been reorganizing the emergency preparedness plans for the University in reaction to the threat of terrorism.

Michael N. Lichten, assistant dean of physical resources for the Faculty of Arts and Sciences, has been a part of an emergency planning initiative that began over a year ago.

“September 11 has caused us to be more exact in our planning, more specific about who will do what,” Lichten said. “We need to be sure we have identified resources to deal with emergency situations.”

At yesterday’s Faculty Council meeting, Lichten briefed the Council on the state of emergency preparations.

“It was an up-to-date message regarding security and emergency and crisis management at Harvard,” Lichten said.

Lichten said that the increased presence of the Harvard University Police Department as well as the stringent restrictions on vehicles in the Yard are part of the heightened security measures the University is taking.

Although the emergency plans are not specific to the war in Iraq and include responses to crises such as power outages, Lichten said that he did take yesterday’s heightened alert into consideration in his presentation.

“We need to have really solid plans. There are a lot of very mundane things that can go wrong,” he said.

Professor of History of Science Everett I. Mendelsohn, a member of the Faculty Council, said that the brief presentation was informative and not “a fear campaign.”

“[The presentation] showed a care for the safety and well-being of students, staff, faculty and administrators, but didn’t hype it,” Mendelsohn said. “I thought it was especially appropriate given all the hype that’s on T.V. right now.”

In spite of difficulties with online emergency notification, the Harvard University website will still be the primary means of transmitting information to the public.

“Emergency Preparedness at Harvard,” a link on Harvard’s home page to a site that contains information about the war and the campus, will be periodically updated while the nation is on alert.

“It is important to emphasize that no threats have been made against the University,” the website reads. “However, University officials remind students, faculty, staff and visitors to Harvard to be aware of their own safety in these uncertain times.”

In case of an emergency, Harvard students will be notified through e-mails, voice messages and website updates, according to the website.