War Arrives With Many Students Abroad 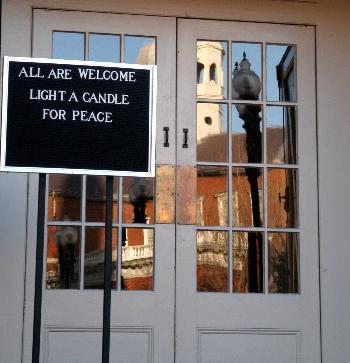 At the doors of the First Unitarian Universalist Church in Cambridge yesterday, a sign invites visitors to light candles in hope of peace.
By Ella A. Hoffman, Crimson Staff Writer

As war begins in Iraq, some alums and at least one current Harvard student remain in the Middle East, and some say that despite the danger, they prefer Jerusalem to Cambridge.

Friends still at Harvard, meanwhile, sit glued to newscasts, eager for information about their safety.

According to a presentation made to the Faculty Council yesterday, 89 undergraduates and 160 students at the Graduate School of Arts and Sciences remain abroad—including two in areas considered to be endangered by the war.

In some cases, television broadcasts offer the only information available to concerned friends.

Gina M. Bruno ’05 said a friend and fellow Harvard sophomore returned to his home in Oman, Jordan at the beginning of February. Bruno said she is worried for his safety.

Bruno said that the dearth of communication has been the scariest part of having her friend overseas. They have not spoken since the third week in February, she said.

“I have sent e-mails, I have made phone calls, and I have not heard back,” she said.

Given the current climate, Bruno does not expect word in the near future.

“I need to keep faith that he is alright,” Bruno said.

Several young Harvard alums also remain in the Middle East, and refuse to budge from their adopted city in Israel.

Avraham “Avi” S. Steinberg ’02, traveled to Jerusalem this year on a fellowship and decided to remain there even after the fellowship was suspended because of travel warnings.

He leaves a father and a girlfriend here at Harvard.

“I was raised to know that things are hard. If I thought things were unlivable, I would leave, but even then, I might find it easier to be here,” Steinberg said. “I have a life here, friends here, an apartment here. I believe in this country and I’m not going to abandon it.”

While remaining in Israel may be easier for his peace of mind, it creates anxiety for those left behind in the U.S., although Steinberg’s father and girlfriend said they understand his decision.

“People don’t want to come home because they feel a deep connection with the places they are living,” said Avi’s father Bernard Steinberg, who is the director of Hillel. “They want to feel that they are not abandoning a country that is under siege. It is obviously a source of anxiety for me, but it is a source of pride that he is making a decision to stay where he is right now.”

“I have a lot of friends and family who live over there,” she said.

“People there have a very different connection with the events than I think we do in America,” Rosen said. “The war could actually affect them in a much more palapable way than it affects us living in America.”

Other young alums studying in Israel, despite the risks and the worries of family members, said they share Steinberg’s reluctance to return home.

Rachael M. Gelfman ’02, who is studying Jewish philosophy at Hebrew University in Jerusalem, said she won’t leave her adopted home.

“I’ve never considered leaving,” she said. “Some of the younger people just out of high school have been called home by their parents, but I haven’t heard of anyone my age leaving.”

Gelfman, who arrived in Jerusalem in September, said she is planning to stay in Israel after she earns her degree to pursue a possible career in education or the law.

Several alums said the war in Iraq hasn’t yet had much tangible effect on day-to-day life in Jerusalem.

“The tension is a little bit escalated, but not much as a result of Iraq,” said James Davis ’01, who is in Jerusalem to study Jewish medical ethics before entering medical school.

“People are more calm over here than they are [in the U.S.],” Gelfman said. “They have gone through this before. They went through their Gulf war and they live with the threat of terrorism every day.”

Still, the Israeli government is distributing gas masks to people through schools and other programs, Steinberg said.

Both Davis and Steinberg said that they recently acquired gas masks for the first time since coming to Israel.

Many of the alums, however, said they want to keep his life as close to normal as possible.

“You can’t live your life thinking of potential threats,” Gelfman said. “It is never the foremost thought in my mind. I take four buses a day. It can’t be. You get into a routine and live your life.”

For some younger students from the U.S., the threat of war has brought changes in their daily life.

—Alexandra N. Atiya contributed to the reporting of this article.

—Staff Writer Ella A. Hoffman can be reached at ehoffman@fas.harvard.edu.