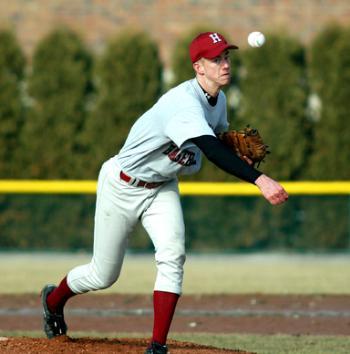 Ambidextrous freshman MATT BRUNNIG got a win and a CG-loss as he and the Harvard baseball team spent spring break in Florida.
By Brian E. Fallon and Lande A. Spottswood, Crimson Staff Writerss

It may have been break, but the Harvard baseball team couldn’t catch one.

After struggling to four straight losses to open its Florida swing, the Crimson finally started playing better baseball—at the wrong time. Harvard (5-10) dropped back-to-back contests against Florida International and No. 13 Miami by a combined two runs before winning two of its final three games to finish the trip 2-8.

“We know we’re a good team,” said sophomore catcher Schuyler Mann. “I don’t think it was a case of not playing well against the bad teams and then playing better against the good teams. It was just everyone starting to play to their potential.

“It gives us a lot to look forward to coming back and getting ready for the Ivy season.”

Harvard next hosts Rhode Island Wednesday at 3 p.m. in its home opener.

In this game, junior Trey Hendricks was just about all Harvard needed.

With the Crimson trailing the Knights 3-2 in the top of the sixth, Hendricks blasted a two-run homer to give Harvard its first lead of the ballgame. Then Hendricks—doubling as the Crimson’s starting pitcher—made sure the lead stood, retiring nine of the next 10 batters he faced before yielding the mound.

The 9-3 victory Sunday was Harvard’s second straight over the Knights (20-14) at the NSU baseball complex in Ft. Lauderdale, Fla.

Hendricks (1-1) finished the game 3-for-5 with three RBI, while allowing three earned runs on eight hits in eight innings of work.

Behind a 17-hit attack sparked by veterans and rookies, Harvard surged past the Knights 7-4 at the NSU Baseball Complex on Saturday evening. Hendricks went 5-for-5 with three RBI, while Salsgiver and fellow freshman Zak Farkes finished with four and three hits, respectively.

Ambidextrous rookie Matt Brunnig took the win for Harvard, allowing four earned runs on 10 hits in seven innings. Brunnig struck out seven batters before being relieved by senior closer Barry Wahlberg, who threw two scoreless innings of relief for the save.

“It was obvious that [the freshmen] were going to be able to contribute immediately,” said Klimkiewicz, who added an RBI double. “It was expected, and we just do what we can to help the team.”

With the score tied at 3-3 in the top of the fifth, Farkes doubled to left field. A sacrifice bunt by senior catcher Brian Lentz advanced the runner, and Farkes scored on a single to right by Hendricks.

The Crimson scored the eventual game-winning run the next inning. Salsgiver doubled to lead off, advanced to third on a ground out and scored on a passed ball.

Despite a solid outing from senior lefthander Kenon Ronz, the Crimson fell to the Knights 5-3 at the NSU Baseball Complex Friday.

Ronz went 6.1 innings, allowing only three earned runs on six hits in what was his best performance of the young season. But with the Harvard bats struggling, it still wasn’t enough.

With the score tied at 3-3 in the bottom of the eighth, Nova roughed up Crimson freshman reliever Frank Herrmann, picking up the game-winning run on a triple by Michael Pellerito. It was Harvard’s eighth loss in a row.

The Crimson took a 2-1 lead in the top of the third on a two-run single by Lentz, and added its final run the next inning. A ground out by junior center fielder Bryan Hale scored Mann from third.

The Harvard baseball team almost broke out of its slump in a big way. Almost.

A 10th-inning single by Jim Burt lifted the No. 13 Hurricanes (20-4) to a 10-9, extra-inning victory over a surging Crimson squad in front of 1,758 fans at the Homestead Sports Complex Wednesday night.

“[It was nice] to pound them around a little bit, and have a very good chance of beating them,” said Klimkiewicz, who had two of Harvard’s 16 hits, “Hopefully we’ll see them again in June.”

The Crimson forced the extra frame with a ninth-inning rally. Trailing 9-8 entering the top of the ninth, Harvard came out swinging. Consecutive singles by Farkes, Lentz and Hendricks loaded the bases with no outs. But Miami reliever George Huguet struck out long-ball threat Mann before giving up an RBI fielder’s choice to Klimkiewicz to tie the game. Salsgiver struck out to end the challenge and leave the score knotted at nine.

His bat quieted, Hendricks nearly won Tuesday’s game for Harvard with his arm. But Florida International successfully waited out the Texan, scoring two runs after he exited in the eighth to prevail 5-4.

Trailing 3-2 in the sixth, the Crimson tied the game on an RBI single by Mann (2-for-3). One inning later, freshman Chris Mackey hit a solo homer down the right field line to give Harvard the lead and put Hendricks, who went 1-for-4 at the plate, in line for the win.

But after the Golden Panthers’ leadoff man reached on an error, Harvard coach Joe Walsh went to Wahlberg. The Crimson closer walked the first batter he faced, then gave up a two-run double to Skipton Adams. Those runs proved to be the difference, as Harvard dropped to 3-6 on the season.

Harvard’s hitters showed some raw power against No. 18 Florida Atlantic (24-7) last Monday night, but not enough to go blast-for-blast with the Owls.

Despite a two-run bomb from sophomore Ian Wallace and a solo shot from Klimkiewicz, the Crimson lost the home-run hitting contest, 3-2, and the game, 15-6.

Harvard had 10 hits on the night but was outmuscled by the middle four hitters in the Owls’ lineup. Jeff Fiorentino, Rusty Brown, Matt Pali and Mike Cox combined to go 10-for-20 with three homers and 10 runs scored.

Crimson senior Ryan Tsujikawa (0-1) suffered the loss, surviving just 2.2 innings after giving up six runs on nine hits. Classmate Matt Self spread four runs over the next 4.1 innings to keep Harvard within striking distance, but Florida Atlantic put together a five-run eighth inning off freshman Mike Dukovich to pull away.

Harvard couldn’t catch a cold, but Wisconsin-Milwaukee had the fever.

Actually, they had Lefeber. But he was running just as hot.

Lefeber allowed just two earned runs on six hits, outshining Brunnig, who was making his starting debut. Brunnig pitched a complete eight innings, striking out five while walking just one, but was tagged with the loss. Only four of the Panthers’ six runs were earned.

Hendricks went 2-for-4 with a homer and two RBI to lead Harvard. Salsgiver also had a two-hit game.

The hits kept coming in Harvard’s second meeting with Rutgers in Boca Raton, Fla., on March 22. So, too, did the losses.

Led by Mann’s three-hit, two-RBI afternoon, the Crimson pounded out 14 base hits, but Harvard still dropped its second straight game to Rutgers and third overall, 15-6.

In addition to Mann, five other Crimson players had multi-hit games. But that didn’t count for much on a day when Harvard’s pitching surrendered 21 hits.

One day after Morgalis was chased out in the third inning by the Scarlet Knights, Ronz only lasted into the fourth.

He was tagged for seven runs, all earned, on 10 hits.

The Notre Dame transfer allowed six runs in just 2.1 innings as the Scarlet Knights jumped out to a five-run lead and never looked back in a 10-2 win on March 21.

Lentz and Salsgiver each had RBI singles to account for Harvard’s runs. Hendricks and Farkes added three hits apiece as the Crimson outhit the Scarlet Knights 12-11.

Morgalis (0-1) retired the first four batters of the game, but a one-out single up the middle by Matt Woslki was the first of four straight hits in the second inning for the Scarlet Knights.

One hit-batsman and an RBI ground out later, Harvard found itself in a 3-0 hole.

A two-run double led to Morgalis’ exit in the third, but the damage to his line still wasn’t done.

He had one more run charged to him after giving way to junior Jason Brown, who was the first of four Harvard relievers on the day.