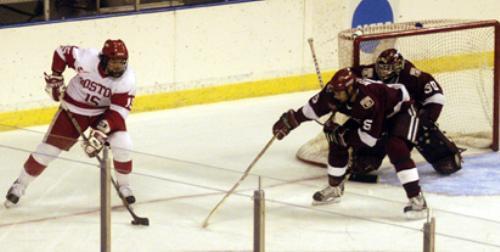 ALBANY, N.Y.—Even with all its history—10 Beanpots, one national championship and the likes of Billy Cleary ’56, the Fusco brothers and Lane MacDonald ’89—never since the birth of Harvard hockey on Boston’s Franklin Field in 1898 had the Crimson won back-to-back ECAC titles.

Harvard didn’t even return to the championship game in the year following each of its first five ECAC titles. The Crimson’s sixth came last season, though, and No. 7 was just inches away on March 22 before it turned into overtime heartbreak

“I did believe we had the game won,” said junior Tyler Kolarik, who would have had the ECAC title-clinching goal for the second consecutive season had Cornell not rallied with two late goals to win 3-2. “But you have to play all 60 minutes.”

One year and six days after Harvard upset the Big Red in their double-overtime epic at Lake Placid’s historic 1980 Olympic Rink, the Crimson appeared headed for another upset of No. 2 Cornell, leading 2-1 with under a minute to play.

David LeNeveu, the Big Red goaltender who seems to find new records to break every weekend, was sitting on the bench for an extra attacker while his teammates scrambled in the Harvard zone, trying to summon a year’s worth of angst to help them score one more goal.

But the Crimson’s Brett Nowak gained possession of the puck to the right of goaltender Dov Grumet-Morris and flipped it toward the empty Cornell cage. During its slow-motion journey, it teetered and tottered on the choppy Pepsi Arena ice, looking true at first but sailing inches wide. Icing was called, bringing a faceoff to the right of Grumet-Morris.

“We were confident,” Big Red captain Stephen Bâby said. “We worked on 6-on-5 all year in practice.”

That was a good thing for Cornell, because it sure didn’t get much work on it during games. The Big Red lost four games all season, pulling its goalie at the end of three of them: in a Nov. 16 loss at Dartmouth, then twice in December while LeNeveu was playing for Canada in the World Junior Championships. The concept of losing was foreign to this team.

The Crimson, though, was on the verge of imposing it upon its rival once again. But Cornell center Ryan Vesce controlled the critical draw—one of his 21 faceoff wins in the game—and pushed it back to defenseman Mark McRae at the point.

The Big Red, with five members of its celebrated senior class on the ice, initiated what amounted to a rugby scrum in the faceoff circle, leaving McRae open at the point and Harvard captain Dominic Moore with a decision to make.

Moore had to choose between a bad situation and a worse one: leave McRae open at the point and get in the way of a pass to 6’3, 240-pound defenseman Doug Murray and his hellish slap shot, or take McRae and hope that someone else was free to step up on Murray.

Moore chose the former. McRae chose low to the stick side and went for it. With 32.3 seconds left in regulation, the game was tied.

“I definitely had a chance on that,” lamented Grumet-Morris after the game. “It went off the post and in.”

Less than 90 seconds into overtime, it was over.

Said Harvard coach Mark Mazzoleni: “This is a tough loss to take.”

It was especially so because of the Crimson heroics it spoiled. Had the Harvard lead held up, everyone would be talking about the grit of Kolarik, who won the title game in double overtime last season while playing with a broken thumb and was a last-minute addition to the lineup after missing all or part of the last five games with two different injuries.

Kolarik was hockey’s equivalent of Kirk Gibson, getting one last good swing out of an ailing body to give Harvard its first lead with 3:46 left in the game.

But even before Kolarik there was Dominic Moore, arguably the best player on the ice against the Big Red—or in any ECAC game this season, with all due respect to ECAC Co-Players of the Year LeNeveu and Chris Higgins of Yale.

Moore worked tirelessly throughout, finding both time and space when there was little of either to be had against the stifling Cornell defense. At last, Moore was rewarded at 8:04 of the third period, when he picked Mark McRae’s pocket clean, spun in the slot and beat LeNeveu to tie the game 1-1.

This, though, was not the night for this Harvard hockey team to pen a new chapter in its hallowed history book. There would be no back-to-back championships, no players tripping over one another in a spontaneous embrace after the game winner and no assistant coaches sliding onto the ice, off-balance, to greet their victorious team.

This time it was some other scraggly-faced team, wearing a different shade of carmine, that had reason to celebrate.