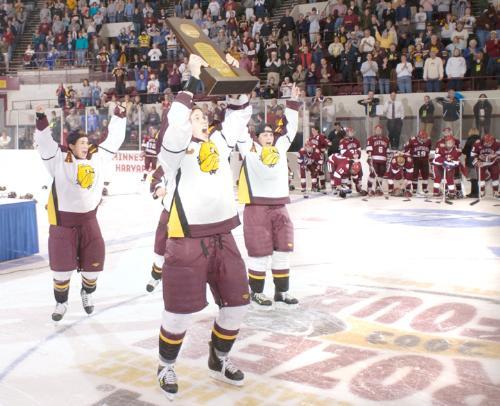 DULUTH, Minn.—It was a bitterly disappointing end to one of the most amazing games and most incredible seasons in women’s college hockey history. The No. 2 Crimson (30-3-1) lost 4-3 in double overtime of the NCAA championship game to No. 1 Minnesota-Duluth (31-3-2) on March 23.

At 4:19 of the second overtime, Duluth sophomore Nora Tallus beat Crimson junior goaltender Jessica Ruddock glove-side on a perfect shot from the slot. Junior defenseman Lauren McAuliffe and junior captain Angela Ruggiero were just moments late in their attempts to block the shot.

“I sit here very sad but also very proud,” said Harvard coach Katey Stone. “Obviously we did everything we could to try to win this game and we came up just a little short and they beat us with an absolutely perfect shot.”

A record sellout crowd of 5,167 witnessed two evenly matched teams in a showcase of women’s college hockey at its highest level ever.

“Before the second overtime our coaching staff was talking about it and we said whoever gets the bounce is going home with the trophy,” said Duluth coach Shannon Miller. “We obviously got the bounce.”

Harvard captain Jennifer Botterill almost got the bounce four minutes before the game ultimately ended. Thirty-one seconds into the second overtime, Botterill fired a forceful shot on net and Ruggiero appeared to knock the puck into the net away from Duluth goaltender Patricia Sautter. After reviewing the play, however, referee Brad Shepherd ruled that the whistle had blown before the puck was knocked in.

Though the Crimson outshot Duluth 16-13 in overtime, the Bulldogs generated the more dangerous chances. Ruddock, forced to play her absolute best, covered up two loose pucks in the crease during the first overtime.

“Our goaltender played out of her mind,” Stone said. “She did everything that we’ve talked about all week.”

Both teams had their moments, but the Crimson’s didn’t really occur until the second period.

Duluth opened the scoring early in the first period, when Jenny Potter sent a pass from the point to Caroline Ouellette, who flicked it over Ruddock. Ouellette started the rush from the Duluth zone and sneaked in behind the Crimson defense.

UMD scored its second goal when a pass from the point was intercepted by Bulldog forward Hanne Sikio, who came in on a breakaway and fired a powerful shot past Ruddock from a distance. On Sikio’s rush, Ruggiero was caught behind the net because Duluth defenseman Julianne Vasichek had checked her.

The Crimson skaters were able to regroup and take the lead in the second period with two quick goals. Twenty-one seconds after intermission, an errant Duluth pass with a lucky bounce gave Botterill a clean break on net, and she beat Sautter stick side with a low shot.

McAuliffe tied the game 23 seconds later. Sophomore winger Nicole Corriero came up with the puck in a scramble in front of the net. Her shot was stopped, but McAuliffe was there to backhand home the loose puck. It was the second straight game McAuliffe had scored 23 seconds after a previous Harvard goal.

The Crimson had a terrific chance to take the lead midway through the period when freshman Julie Chu came in on a clear breakaway, but her shot deflected away off the post.

Harvard’s second line would give the Crimson the lead with five minutes remaining in the period. With the Crimson on the power play, sophomore defender Ashley Banfield passed the puck to captain Jamie Hagerman, who rifled a pass to Corriero in the slot. Just seconds after the power play ended Corriero made no mistake, sliding the puck perfectly between Sautter and the post for the score.

A mistake in the defensive end would cost Harvard its only lead of the game in the final minutes of the second period. Duluth pressured Crimson captain Kalen Ingram from both sides behind the net, and she tried to bank the puck off the boards to Banfield. Instead, the puck was intercepted by Duluth’s Joanne Eustace, who fed Sikio in front with a two-on-none with Jenny Potter. Ruddock left the near-side open out of respect for Potter, and Sikio hit the open target to tie the game.

The key event of the third period was when Ruggiero was whistled for a two-minute interference penalty and a 10-minute misconduct with five minutes left in regulation. The calls forced Harvard to play the next 12 minutes, including seven of overtime, without the best defenseman in the world. The Crimson more than held its own during that stretch, however, with freshman defenseman Jennifer Skinner replacing Ruggiero.

Ruggiero returned triumphantly to the ice during the first overtime and rallied her teammates. But 30 seconds into the second overtime, Shepherd’s whistle ended her bid for the game-winning goal. The Harvard players failed to control the puck through the neutral zone in the game’s final three minutes before Tallus’ heroic goal forced them to cope with defeat.

“All the girls are so appreciative of the kind of team that we’ve had and the effort we put forward tonight,” Botterill said. “It was a great hockey game to be a part of, and I think that obviously this evening we’re going to be a little disappointed for a little while. But I think with time we’ll realize what a special season this was. It was a great game. We’re very proud to have been a part of it.”