Dancing As More Than a Hobby 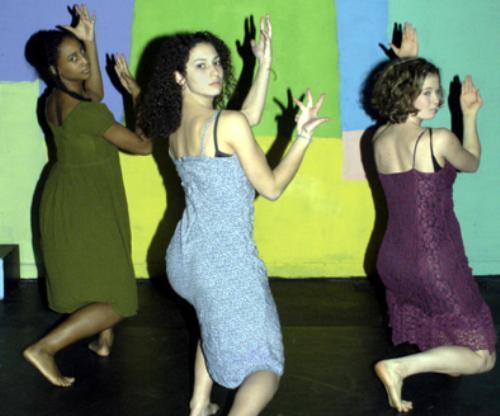 Dancers move to Brazilian beats in The House that Ansiedade Built last weekend. The production, written and directed by Shelby J. Braxton-Brooks ’03, was the culmination of her senior thesis work.
By Wendy D. Widman, Crimson Staff Writer

Dancer-choreographer Shelby J. Braxton-Brooks ’03 did not have to suffer through printer jams and paper shortages to finish her thesis—instead, she brought a little bit of Brazilian culture and samba to the Loeb Experimental (Ex) Theater.

As the lights went up on The House that Ansiedade Built last weekend, 13 dancers and actors moved rhythmically to South American drumbeats against a vibrantly-colored patchwork background painted onto the Ex’s black walls.

For Braxton-Brooks, a special concentrator in Performance Studies and Performing Texts, her staged thesis let her combine her artistic interests as a dancer with her questions about “fantasized notions” of Brazilian culture in the Western mind.

But Braxton-Brooks’ thesis is a rarity.

Although many students profess an interest in dance—over 600 people enroll each semester in extracurricular dance classes sponsored by the Office for the Arts (OFA), and Harvard recognizes 18 student dance groups—the College offers very few theoretical dance and movement classes for credit.

Many active in dance on campus say they would like that to change.

“Most schools have a dance major or minor,” says OFA Dance Director Elizabeth Bergmann. “But at Harvard, dance classes are not for credit.”

However, they say these improvements cannot be sustained without changes to Harvard’s curriculum.

Bergmann and students suggest the addition of a dance theory or history course to the Core Curriculum, and say Harvard’s impending curricular review may be an opportunity to add dance classes—both performance- and theory-based—to the course catalog.

Will Dance for Credit

Those interested in studying dance academically have typically had to apply for a special concentration. But Braxton-Brooks says there were just enough relevant classes for her to complete her concentration requirements.

“I think it would be wonderful to have a place for dance in the curriculum, perhaps with anthropology, history or folklore,” she says.

Although there are only three credit courses with significant movement components, the OFA offers several extracurricular performance dance classes, but Bergmann says it is tough for these classes to compete with students’ busy academic schedules.

“The good news is that people come to these classes,” she says. “But when the going gets tough at midterms, attendance begins to drop off.”

Bergmann teaches Dramatic Arts 14: “The Art of Movement and Design,” which—along with Dramatic Arts 15: “Movement for Actors and Directors,” and a Folklore and Mythology class taught by Foster forms the core of Harvard’s credited dance program.

More in the Core

Several dancers say Harvard should supplement these three courses with a new dance class in the Literature and Arts B Core.

Literature and Arts B’s description in the course catalog says its classes focus on a “non-literary form of expression, and offers instruction in the elements of either visual or musical understanding, in the discipline of looking or listening.”

Foster says the Core would be a good fit for a dance theory class.

“Dance is a very powerful non-verbal art,” she says. “We’ve been exposed to so many different types of dance. We are all dancing, all these cultures, all the time, and we don’t analyze it enough.”

“I taught the class for eight or nine years and it was always well attended,” she says.

Mallardi, who taught dance at Harvard for 38 years, says it’s been difficult to develop a strong dance program at Harvard.

“For years people have been telling me ‘Don’t waste your time, Harvard will never go in that direction,’” she says. “Harvard wants alums that make decent money to send back to the school. Artists aren’t going to do that.”

She says Harvard does not think of dance as an academic discipline.

“While other Ivy League schools like Princeton have dance departments, Harvard wants to remain the last scholarly institution,” she says.

Both Bergmann and Foster say there has been a significant increase in interest in credited dance classes.

“I’m sure that many faculty members would be interested in embracing dance as a cultural revolution in our curriculum,” Foster says.

Bergmann says Harvard needs to do more to promote dance.

“This is the 21st century and Harvard has an incredible history of longevity, but the arts still seem to be seen as a social event,” Bergmann said. “The arts need to come together and be represented. We need to place more value on the arts.”

Hoping for a Good Review

With new administrators in the Faculty promising a broad-sweeping curricular review, some say they hope the next few months may be the dancers’ chance to get the courses they’ve always wanted.

Dean of Undergraduate Education Benedict H. Gross ’71 says the administration will consider dance as part of their curricular review.

“One of the topics we are going to consider in the review is the interaction of curricular and extra-curricular activities, particularly in the arts and public service,” he wrote in an e-mail. “I wouldn’t want to predict where we will end up a year from now, but it will certainly be considered.”

Bergmann says she has submitted a proposal for another dance course under the Committee on Dramatics, but there has not yet been an official proposal for an additional Core course. To add a Core course, a proposal would have to come from a faculty member on the tenure track. Bergmann’s status as lecturer does not permit her to teach in the Core.

“In the past few years I’ve seen a trend in the course catalogue of adding more performance theory classes,” she says. “This gives me faith that Harvard is expanding their idea of what they consider academic.”

“After all, art at its best always engages the mind,” she says.