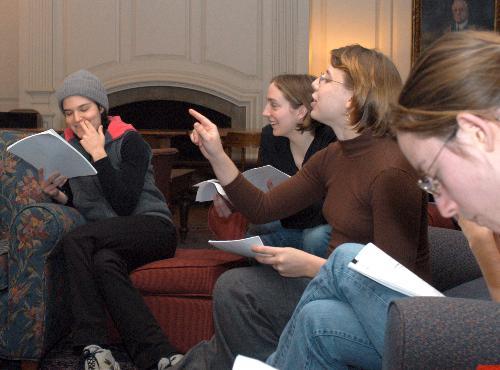 The Athena Theater Company gathered to read Lysistrata, a comic play with an anti-war message, in the Lowell Junior Common Room yesterday.
By Claire A. Pasternack, Crimson Staff Writer

The women of Athens withheld sex from their husbands until they stopped a ruinous war in Aristophanes’ play Lysistrata. Last night, the Athena Theater Company held a reading of the ribald anti-war play to protest possible American military action against Iraq.

Joining over 1,000 groups around the world yesterday, 11 students in the Lowell Junior Common Room read the play as part of the Lysistrata Project.

The group chose the play for its humorous dialogue yet strong anti-war message, according to Lysistrata Project spokesperson Mark Greene.

“This is already a pretty grim time and people could really use a laugh at this point,” Greene said. “The play is funny and sexy, and sex sells.”

Lysistrata, which was first performed in 411 BCE, tells the story of the women of Athens who take control of the city and deny their husbands carnal pleasures in order to stop the Peloponnesian War. The women’s aim is to force their sex-deprived husbands to make peace.

“To my lover—or husband—I’ll not open my doors, though he flaunts his battering tram,” the students read in unison. “At home I will refuse to put anything on except something he’d like to take off.”

“It fits a lot with our goals,” said Athena board member Julia H. Fawcett ’04. “It’s all about women doing what they can to make a political statement.”

One Greek warrior, Kinesias, is referred to as “Penis” and speaks directly to his erect phallus.

“Sorry, little guy, all dressed up and no place to go!” said Natalie D. Evans ’06 in the character of Kinesias.

The students chuckled at the lewd humor as they read. But they said they did not lose track of the play’s political message.

“The message is pertinent to today,” said Matthew R. Skomarovsky ’03, who participated in the reading. “Every significant movement has its artistic component and that’s what this is.”

—Staff writer Jaquelyn M. Scharnick contributed to the reporting of this story.