Pring-Wilson admits he stabbed Cambridge resident Colono five times, but argues it was in self-defense 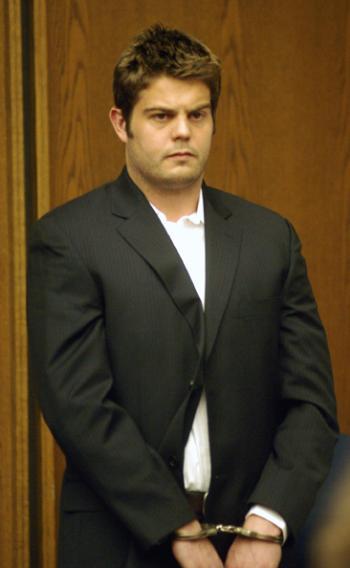 A Harvard graduate student charged with the murder of a local teenager pleaded not guilty yesterday before a packed Cambridge courtroom.

Alexander Pring-Wilson, 25, stood silently through the five-minute arraignment hearing at the Cambridge District Court, as the family of victim Michael Colono looked on in tears.

Pring-Wilson, a student at the Davis Center for Russian and Eurasian Studies, was accused of stabbing Colono in an early morning altercation Saturday, outside a local pizza parlor. Colono later died of his wounds.

Jeffrey Denner, Pring-Wilson’s attorney, requested that his client receive medical and psychological evaluations and a polygraph test before a bail hearing. A judge agreed to Denner’s request and said she will set bail on Friday.

Outside the courtroom, Denner said that his client stabbed Colono in self-defense after he was “attacked and assaulted.”

Denner said that the polygraph test will establish that his client can be safely released on bail.

The victim’s family—about 20 members of which attended the hearing—angrily denied that Colono initiated the altercation. During the hearing, one interjected with a cry of “bullshit” as Denner requested the medical evaluations.

Pring-Wilson entered a not-guilty plea against the current charge of murder, but Denner said the prosecution has the option of indicting him with a lesser charge.

According to investigators’ accounts, released Saturday by District Attorney Martha Coakley, Pring-Wilson was walking home from a nightclub alone sometime after 1 a.m. when he encountered Colono, 18, sitting in a car with his cousin and his cousin’s girlfriend.

They say Colono got out of the car, and a violent fight between he and Pring-Wilson ensued, leaving Colono with five stab wounds to the torso.

Emily LaGrassa, the Middlesex County District Attorney spokesperson, said Colono and friends left the scene not realizing he had been stabbed. Colono was pronounced dead at the Beth Israel Deaconess Medical Center later that night.

Pring-Wilson, whom police had questioned and released at the scene, was later arrested.

Officials said Saturday that they had not recovered a weapon, but Denner said that his client had defended himself using a pocket knife with a three inch blade.

LaGrassa said today that she could not release further details about the investigation.

Pring-Wilson, a Colorado native, planned to receive his Master’s degree this spring, and then return to Colorado for law school.

Colono was raised and attended school in Cambridge, and worked a maintenance job at a local Days Inn. He leaves a three-year-old daughter, who is being raised by her mother.

Yesterday’s hearing began around 10 a.m., when Pring-Wilson was led into the courtroom in handcuffs.

Representatives from media outlets across New England were on hand for the arraignment.

Pring-Wilson’s mother and stepfather listened to the proceedings silently, with their heads bowed.

After the short hearing, members of Colono’s family left the courtroom still in tears.

Marcos Colono, the victim’s brother, dismissed Pring-Wilson’s claim of self-defense, saying that Pring-Wilson must have “invited” the altercation.

Marcos Colono added that positive character assessments—offered by Pring-Wilson’s friends and colleagues at Harvard over the last several days—do not change the reality that his brother is dead.

“He needs to pay for what he’s done,” Marcos Colono said.

He said Pring-Wilson should have used better judgment. “He was walking around drinking and carrying a knife,” he said.

Denner spoke at a press conference in a room adjacent to the courtroom.

“Alex defended himself, he did not instigate or pursue [a fight],” Denner said.

Denner said he requested that a bail hearing be held later this week to give him time to gather evidence for arguments that Pring-Wilson should be released.

“It’s important that we can present the most complete picture,” Denner said. “[We want] to give a context of who he is and what he’s done in the past.”

Denner said Pring-Wilson has a clean criminal record except for a minor incident in college, which Denner called a prank. He takes no medication and has never been diagnosed with any mental illness, Denner said.

“This is my worst nightmare,” said Pring-Wilson’s mother Cynthia Pring. “He’s never been in trouble like this before.”

She described her son’s accomplishments with tears in her eyes. “I’m so proud of him, he’s worked so hard,” she said.

When asked by a reporter whether she had anything to say to the victim’s family, Pring said, “That’s sort of an odd question—I feel like my son was the victim.”

A couple of miles from the courthouse, students and faculty at the Davis Center continued to express shock at the arrest of their classmate and waited hopefully for a logical explanation.

Stefani L. Bell, a classmate of Pring-Wilson—who is known as “Sander”—said she couldn’t imagine him committing a violent act.

“When I think of Sander, the words that come to mind would be lighthearted and good natured,” Bell said. She described Pring-Wilson as laid back.

She said that other students in their 15-person master’s program in Russia, Eastern Europe and Central Asia studies were in “utter disbelief.”

Bell said that she and her fellow students stand behind Pring-Wilson. “We indicated we’ve been willing to anything to vouch for his character or do whatever is needed.”

A class of seven students Bell takes with Pring-Wilson was sidetracked yesterday.

Preceptor of Russian Languages and Literature Natalia Pokrovsky said they spent time discussing their reaction to the weekend’s events. “We couldn’t believe he was a murderer,” Pokrovsky said.

Pokrovsky said Pring-Wilson always showed “so much genuine sympathy and empathy to people here. To me it’s paradoxical.”

She said her experience with him in class gives her no reason to believe Pring-Wilson was aggressive.

She remembered Pring-Wilson telling the class that he couldn’t watch coverage of the war in Iraq.

“He said ‘It’s so tragic, I hate violence so much.’ I felt immediately it was very genuine,” Pokrovsky said. “I felt as if this person could be a natural pacifist.”

‘There Are No Winners’

Despite remarks by Marcos Colono, quoted in yesterday’s Boston Herald, that Pring-Wilson is a “Harvard thug,” there were no signs yesterday that the stabbing was going to fuel local anti-Harvard sentiments.

Cambridge Mayor Michael A. Sullivan expressed his sympathy for the victim’s family, but cautioned that anger should not be directed at Harvard or the Harvard student body.

“As Michael’s brother said, even people at Harvard do stupid things. They need to face the consequences,” Sullivan said. “But I don’t think it’s fair to paint the student body in the same breath as the gentleman who is charged with the crime,”

Sullivan said Harvard students and Cambridge residents have occasional tensions—but said they “are few and far between.”

“You have to be careful to separate out issues as they relate to the University from the student population of the University,” he said.

Sullivan said he foresaw difficult times for the family of both the victim and Pring-Wilson. “There are no winners,” he said.

—Jenifer L. Steinhardt contributed to the reporting of this story.