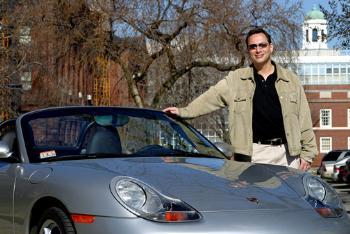 Baby, You Can Drive My Car

“It makes me feel sexier,” Senior Tutor of Adams House Michael Rodriguez says of his brand new 2003 Porsche Boxster convertible. “This car is like pure sex on wheels.”

Valued at $52,000, Rodriguez’s new toy comes equipped with more than just sex appeal. The two-passenger vehicle is loaded with a 12-speaker Bose super deluxe surround sound system, microphones that automatically adjust the volume of music to the surrounding noise, a 224 horsepower V6 engine, and a convertible top that unfolds itself in what Rodriguez describes as a “12-second symphony.” While such amenities may pique the interest of would-be carjackers, Rodriguez isn’t worried. His vehicle came installed with Lojak—a satellite positioning system that can instantly pinpoint his vehicle’s whereabouts anywhere on Earth.

The pricey car, Rodriguez says, is part of his personal philosophy to reconcile respect for others with his own desire to indulge—an ethos he dubs “compassionate hedonism.” “As long as you don’t hurt anyone else,” he advises, “do what you always dreamed of.” Rodriguez first dreamed of purchasing a Porsche 10 years ago when an ex-boyfriend bought one. Over the past year, he wrestled with the idea, and finally surrendered during January. Auspicious timing helped him shave an undisclosed amount of money from the price tag. “People don’t buy convertibles in January,” he explains.

Among Rodriguez’s favorite activities is driving to Revere Beach and speeding down the Bunker Hill Bridge to test the promised acceleration of 0 to 60 mph in 6.2 seconds. The prospect of accidents, however, limits Rodriguez to the speed limit. “People are in front of you all the time,” he says of other motorists, “but it’s probably a good thing because I’d go crazy.” Rodriguez instead satiates his need for speed by blasting soundtracks from his convertible while trying to drive “based on the mood of the music.” The soundtrack to Gladiator, he explains, reminds him of a “conquering hero” which encourages him to “drive more aggressively.” Also in his collection: Queer as Folk, Missy Elliot and Fashionweek: Music from the Catwalk, a compilation of tracks used in fashion shows by Prada, Dolce & Gabbana and other top designers.

Rodriguez’s admiration for his car has, at times, landed him in trouble. Last week, while returning from New Haven, Rodriguez parked his Porsche near a wharf and began filming the vehicle with his camcorder.

“A cop thought that I was a terrorist filming the harbor,” Rodriguez says. In the end, the police officer didn’t give Rodriguez a warning or a ticket, just kudos for his convertible.

In spite of his present happiness, Rodriguez has had his share of vehicular misfortune. His first set of wheels—a used, 1980 Toyota Corolla 4-door sedan—was an unfortunate brown color. And even his silver Porsche isn’t exactly what he had hoped for. “I wanted the white one with red leather interior,” he says. “but it was [out of stock].” For now, pure sex on wheels will have to suffice.