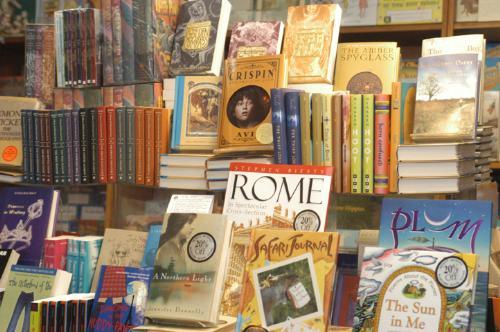 A sample of the inventory at independent bookseller Schoenhof’s in the Harvard Square shopping district. Independent bookstores in the Square are feeling the ill effects of the national recession.
By Claire A. Pasternack, Crimson Staff Writer

Solano, who has owned the store for 30 years, knows people who need help when she sees them.

As she stocks shelves with her small dog underfoot, she offers the pair help.

A few minutes later, she asks again, and this time they accept her help. As it turns out, the book of William Carlos Williams poetry they’re looking for is on the shelf right behind them.

Solano’s shop is the complete opposite of a big-box super-bookstore, with their prominent signs and emphasis on breadth.

Grolier Poetry Book Shop is one of a handful of independent bookstores in Harvard Square which Cambridge aficionados say are integral to the intellectual, eclectic character of the area.

But for the past two years or so, Grolier and other shops have faced a tough economy and competition on every front—both from big-box booksellers and from online retailers like Amazon.com.

“At least if they are,” she adds, “they’re not doing it here.

The skyrocketing cost of real estate in Harvard Square has left Solano and other booksellers wondering how much longer they’ll be able to pay the rent.

But Solano is trying to fight back.

In her effort to preserve the 75-year-old store, she has equipped the business with technology of the modern age.

Solano also recently launched a website for the store, which boasts an information-age database of poetry books and an online ordering page—as well as a prominent list of the old Plympton Street fixture’s famous former regulars, including e.e. cummings and T.S. Eliot.

She and other booksellers say they’re making every effort to modernize and stay competitive—but bookstore lovers, who say dozens of shops have closed their doors already, are still fearful for the future of the independent bookstores in Harvard Square.

Solano says only time will tell how much longer Grolier Poetry will survive in the Square.

She doesn’t want to pose a guess.

But despite a sluggish economy, competition on several fronts, high rents, she and other store owners say they’re faithful that their shops—with their specialty selections, high-quality service and long histories in the Square—will be able to make it through hard times.

In the past two decades, fans of small Square bookstores say, dozens have been forced to close their doors.

The record of bookstore comings and goings shows a sharp decline in recent years—for example, seven independent bookstores mentioned in a 1992 Crimson article have since left the Square.

And in the past few years—particularly since Sept. 11—a harsh economy has meant book sales are down, store owners say.

Even the Harvard Coop—with its near-guaranteed business from students—has seen a dip in sales.

“The industry as a whole has slowed down,” says Allan Powell, the Coop’s Corporate General Manager. “It’s something we’ve been watching since last fall, just overall a slowdown in the industry.”

But the Coop was recently purchased by bookselling giant Barnes and Noble, and the recession has hit independent businesses—which don’t have corporate support nets—particularly hard, booksellers say.

Some booksellers say that the war in Iraq has caused a deeper slump in sales.

Dean W. Hunt, assistant manager at foreign book specialist Schoenhof’s, says that in the days after the war started he noticed “a most visible decrease in business,” even in phone calls to the store.

“The war has had an impact on business,” Kramer says. “More people are staying home and watching CNN.”

“It’s starting to come back now,” he says. “People are getting the sense that it’s probably going to go on for a long time and life has to go on.”

Solano says sales at Grolier have “plummeted” since the start of the war, but she attributes the fall to “the depression factor.”

Since the start of the war, she says, people have been so depressed that “fourteen out of fifteen of my customers can’t read poetry.”

Solano says war in the past has meant tough times for Grolier.

Sales nearly stopped altogether after she hung signs in her window protesting the Gulf War in the early 1990s, she says.

“I was boycotted so heavily by people in the Square, it almost brought me under,” she says.

The Battle of the Rent

The independent bookstores are all fighting the same battle against Harvard Square’s notoriously high rents.

Both Harvard Bookstore and Grolier are owned by Harvard, Kramer says.

“A lot of our future is in their hands,” Kramer says, adding that Harvard Bookstore has three years left on its lease. “Harvard up until now has been rather beneficent, but I have no idea what’s going to happen in the long run.”

“I think if I had to pay the average rent in the Square I would have been long gone,” she says. “They’ve given me a break.”

But even though many Square booksellers are struggling to pay the rent and keep themselves in business, they say they don’t really compete with one another, and often refer customers to other independent bookstores.

Their worst competitors, they say, are hundreds of miles away from the Square, yet just a click away online.

Kramer says that for Harvard Bookstore, the online competition poses a significant threat. He says that many of his customers are “people who are used to using the internet.”

“It’s a challenge for us to deal with,” he says.

And for niche bookstores, like Grolier and Schoenhof’s—which have traditionally found their customers by selling books that can’t be found anywhere else in the area—online megastores provide competition where there was little before.

“We know the competition is out there,” says Schoenhof’s Assistant Manager Hunt. “We know that students use the competition to buy their books. We have been hit here and there by the technology that has enabled customers to find books elsewhere.”

But Kramer says the Harvard Bookstore has acclimated to the online competition.

“The online competition has kind of leveled off,” Kramer says.

And like Grolier, many Square bookstores have launched their own websites where customers can buy online.

“Our internet website boosted business,” Hunt says. “It has connected us with customers who might not have known about us otherwise.”

Hope for the Future

Square booksellers say they think the services they provide—full stocks of specialty books and well-trained staff who are experts on the material—contribute to their survival.

Hunt says Schoenhof’s still has “a loyal clientele” that shop at the store regularly in part because of its qualified employees.

He says a student searching recently for the only grammar book on a certain language in India was “ecstatic” to find the book at Schoenhof’s. He says the store is unique because it carries such a large collection of books on specific topics.

“Our classics collection is stupendous,” Hunt says. “We have books that you can’t find elsewhere. I still walk around and will feel some awe at the books we have.”

Hillel Stavis, the owner of Wordsworth Books, says his shop has been able to attract business largely due to its series of lectures by authors.

“We have an author series that’s about the best in town,” Stavis says. He adds that the children’s division of Wordsworth has done particularly well.

And the Square’s independent booksellers reinforce the area’s character as a nexus of reading and learning.

“If there ever was a community where there is a demand for books it’s going to be this one,” Gifford says. “Graduates come back and all they want to do is browse in the bookstores—it’s a special attraction.”

“People love the independent bookstores in Harvard Square,” says Robin A. Lapidus, executive director of the Harvard Square Business Association. “They’re an essential thread in the fabric of this community.”

She says the volume of e-mails she receives through the association’s website asking about the Square’s bookstores attests to their importance to locals and tourists alike.

“We get a substantial amount of e-mails from people asking questions about bookstore hours,” Lapidus says. “Harvard Square is still recognized in the world at large as a bookstore-ish kind of place where anyone can find almost any book.”

And booksellers say they are always looking for new ways to market their books.

With websites and 1-800 numbers, as well as frequent-buyer discounts, bookstores are doing all they can to drum up business.

Last month, the Harvard Bookstore kicked off a citywide book group, with support from a variety of Cambridge organizations.

“We’re working to reach out more than we ever have before,” Kramer said at the book group’s launch, as he sold copies of the citywide group’s first selection, James McBride’s The Color of Water.