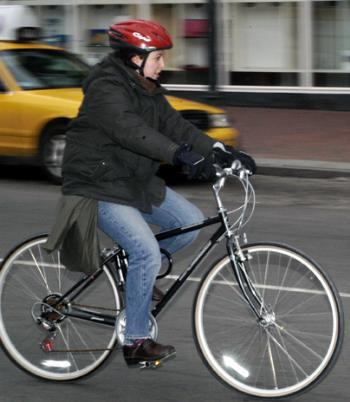 This week, the Cambridge Police Department (CPD) stepped up enforcement of bike-safety laws, targeting those riding at night without lights. But the crackdown has a softer side—violations often bring only a warning and carry with them the possibility of a bright surprise.

Officers will be stopping bicyclists to explain the mandatory lighting for bicycles at night—a white front light and a red back light that can be seen from at least 500 feet away, said Sergeant Kathleen Murphy of the CPD Bike Control Unit.

Though violations could result in a $20 fine, this week most offenders will receive a penalty-less citation along with either a free or discounted bike light.

The effort comes as part of a CPD campaign to inform bicyclists to—as its slogans say—“Light Up” and “Be Bright.”

Murphy said few bicyclists have proper lighting, which puts them at risk for accidents at night.

“The goal is to educate riders about laws that say you should have lights on your bikes,” said Murphy.

Throughout the week, CPD will distribute 50 free lights and pamphlets about bike safety. Once the lights are gone, citations will be good for a 10 percent discount on bicycle lights at any of seven local stores.

“This week we’re giving warnings only,” Murphy said. “But after this it’s up to the discretion of the officer to give out fines. But the majority of bike citations are warnings.”

In 2002, there were 88 reported bicycle accidents and one fatality in Cambridge. These accidents might have been averted with proper lighting and common sense, Murphy said.

Students who frequently bike the streets of Cambridge said that this measure will help to improve safety.

Joseph R. Oliveri ’05 said he sees a fair amount of bicyclists without lights.

“People don’t think of it, and if they do, the big deterrent is going out and buying [the lights], which are expensive for a college student,” he said.

But lights are essential for safe riding.

“It sounds so textbook, but having proper light is really important, especially at night. You don’t have rearview mirrors, so it depends on who is behind you to see you,” Oliveri said.

On Monday, the first night of the program, officers stopped 22 violators.

A former bicycle messenger and a member of a Cambridge committee redesigning Harvard Square, Chopra said he was aware of the law and agreed that light-less biking was a danger.

But he said that biking in the Square was hazardous in general.

“There are no bike lanes, it’s becoming a unsafe place to bike,” Chopra said.

Another Harvard biker, Paul G. Dexter ’04, said that traffic, not lighting, is the most important threat to safety.

“The biggest safety concern is from the speed cars are going when there are no bike lanes,” Dexter said. “The danger from that is the greatest problem, in the day just as much as at night.”

Murphy stressed that it is important for students to exercise caution when biking around Harvard Square.

“If you’re riding a bike at night, purchase a light,” Murphy said. “Try to stay to the right of traffic and be careful of parked cars.”