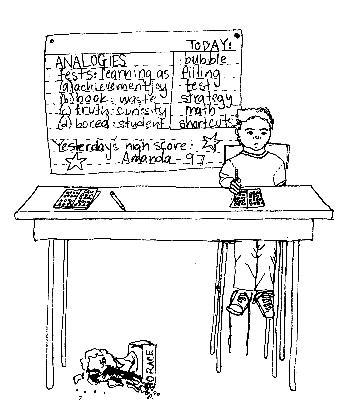 By Eleanor R. Duckworth and David U. Fox

Twenty years after the Reagan administration discovered that ours is “a nation at risk” and that our educational system is rampant with inequality, the potent political rhetoric of “standards-based” reform dominates the important debate regarding education reform. In order to leave no child behind, government establishes what it calls high standards, aligns curriculum and pedagogy with these so-called standards, tests students to see if they meet the standards, and holds students, teachers, and schools accountable for test results. The logic is clear, but the premise is false. The standards-based movement, including our local version, the Massachusetts Comprehensive Assessment System (MCAS), is based on the faulty assumption that standardized instruction and standardized tests breed high intellectual standards and that the “standards” established will truly break the cycle of inequality.

Many of us who oppose MCAS and the larger reform strategy do so because it does not, in fact, set high intellectual standards for students. The reform strategy, with its reliance on high-stakes tests, requires teachers and students to memorize vast amounts of information for the sole purpose of answering questions correctly on the test. Because of the stakes, classrooms become training grounds for taking tests. Of course test scores rise, but does this mean better education? No. There is little time left in the school day for worthwhile learning. Far from its touted purpose, the current reform strategy actively obstructs the establishment of high intellectual standards.

Classrooms dominated by a high-stakes test lack the kind of teaching and learning that engages students and fosters truly high standards. Such classrooms are far removed from the dynamic discourse surrounding Exeter’s Harkness Tables or the comprehensive oral examinations at Central Park East. Such classrooms do not have time to devote to “Facing History and Ourselves” or to uncovering the mathematical roots of pi. By precluding these kinds of opportunities for students, such classrooms systematize mediocrity. They do not prepare students to make choices, to establish new paths to understanding, or ultimately to break the cycle of inequality.

MCAS has drastically affected both teaching and curriculum. Teaching now focuses on superficial breadth at the expense of substantive depth. Curriculum now consists of training with the goal of raising scores on the tests.

Of the many teachers in our public schools, urban and suburban, who have deep knowledge of subject matter and of how to engage youngsters, most are in despair over the limits put on them by the mindless work demanded by these high-stakes tests. Many of those who are less well prepared for teaching use this diminished curriculum as a crutch. They do not seek further help, nor does anyone in a supervisory capacity offer help of any significant kind. Again, high-stakes tests prevent the development of high standards.

Perhaps the most significant consequence of high-stakes testing and its interference with quality education lies in the rising attrition rate. According to a Department of Education report, ten percent of the high school Class of 2003—some 6,000 students—has not passed the MCAS and will not receive diplomas, a serious matter for each student. But the ten percent failure rate applies to the Class of 2003 as it exists today, including only those students who now are in twelfth grade. If one considers the Class of 2003 as it existed in 2000—all the then-ninth graders, only some of whom are now in twelfth grade—then 30 percent has not passed MCAS, including 46 percent of African-Americans and 60 percent of Latinos.

There has, of course, always been attrition in high schools, but since MCAS was introduced, the numbers have risen at a disturbing rate. According to data collected and analyzed by Walt Haney at Boston College, in the years before MCAS was introduced in 1997, only six to seven percent of students turned up missing between grades nine and ten. In 2001, the rate at which students were missing between grades nine and ten had nearly doubled to 12.4 percent. The rate at which Latinos were missing from grade ten had also nearly doubled, from 17 percent to 29 percent. For African-American students the rate had tripled, from a little over seven percent to almost 24 percent in just five years. These numbers are particularly disconcerting because fewer students who drop out of school now are returning, and those who drop out in ninth grade are least likely to do so.

As educators, we believe that this frightening rise in attrition is not the result of students’ fear of failure on MCAS. Rather it is the result of students’ understanding that the worth of MCAS is only a diploma, not education. As our colleague, Dimon Professor in Communities and Schools Pedro Noguera, has recently noted from his interviews with Boston public school students, students want to be challenged and engaged in their work. Formulaic test preparation drains the life out of both classrooms and students.

Moreover, MCAS narrowly defines intelligence, knowledge, and understanding. The MCAS does not respect the fact that a six-year-old is bilingual. The MCAS does not care if a student understands multiplication; it only cares that a student knows the multiplication tables. Public school students know this vital distinction better than proponents of MCAS. From the perspective of a 16-year-old, what is the better use of time: working to earn a wage or staying in a school that is as intellectually engaging as basic training, only to pass a test and end up with a slightly better job—if not the very same one?

When truly high standards are set, students stay in school and rise to meet those standards. If we want to address inequality in education, then we must provide all children with a demanding and engaging education: the kind of preparatory education, in fact, that most Harvard students have received.

Eleanor R. Duckworth is professor of education at the Harvard Graduate School of Education (GSE). David U. Fox is a proctor and Wigglesworth Hall and teaching fellow for Duckworth’s GSE course “Learning and Teaching.”