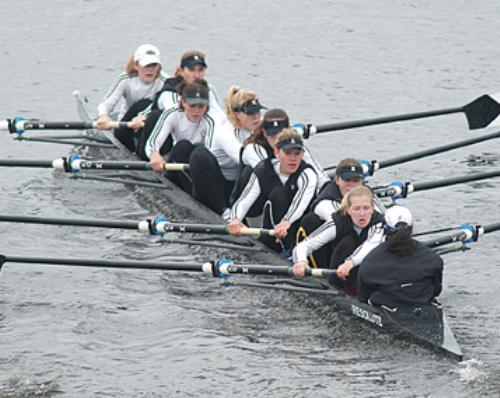 After reclaiming the Case Cup with victories over No. 9 Yale and No. 13 Virginia Saturday on the Charles, the No. 3 Radcliffe heavyweight crew suffered its first setback of the year against No. 8 Brown on Sunday morning.

“Brown has gotten a lot faster after their loss to Princeton at the beginning of the season,” co-captain Courtney Brown wrote in an e-mail.

The Bears proved it on the water, downing the Black and White in both the second varsity eight and varsity four “A” events, 6:43.0 to 6:46.6 and 7:34.3 to 7:49.0, respectively. Brown had even greater margins of victory in the first novice eight and second novice four events.

The races were rescheduled for earlier in the day to avoid a late April downpour forecast for the afternoon. The early times didn’t help the team in its second race in two days.

“We were really tired out. That was part of it,” junior Lis Lambert said. “We’re disappointed with the results, but not disheartened or discouraged.”

“Any time you have two races back-to-back against arguably the two fastest teams in the league, you’re bound to feel it in your muscles,” Psutka said. “But you can’t chalk it up to fatigue—they’re fast teams.”

Despite the setback on Sunday, Radcliffe had a great deal of positives over the weekend.

The Black and White first varsity eight posted a remarkable time of 6:24.6—its second-fastest ever on the Charles—beating Yale by two seconds while beating UVA by three.

“We managed to pull ahead after the 1st 500, increased the margin during the 3rd 500 and stayed ahead until the end of the race,” Brown said.

The Black and White claimed another victory in the second novice race in 7:06.1. UVA and Northeastern followed at 7:11.6 and 7:37.0, respectively.

Yale posted victories in both the first varsity four and the first novice races, while UVA edged Radcliffe by 1.5 seconds in the second varsity eight event.

Sunday’s results left Radcliffe hungry for another showdown with Brown.

“The great thing is we’ll see [Brown] again at Sprints, and we’ll gain a considerable amount of speed in the next couple of weeks,” Psutka said. “I expect it will be a different story when we meet again.”

In the meantime, the heavyweight crew returns to action Saturday, hosting Charles River rivals MIT and No. 18 Boston University.