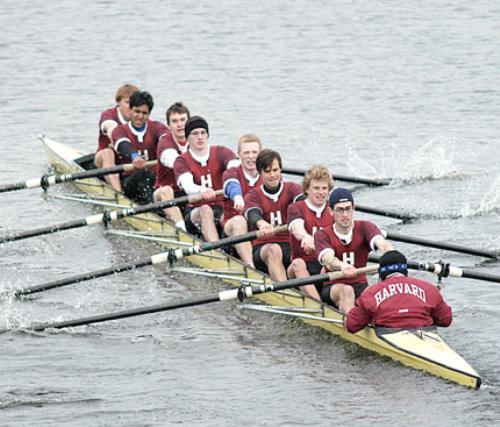 Though the men’s lightweight varsity boat took the Goldthwait Cup over Yale and Princeton, the third varsity and second freshman boats fell in their events as Yale captured the Vogel Cup.
By James Sigel, CONTRIBUTING WRITER

The No. 4 Harvard men’s lightweight crew blew past Princeton and Yale to win the Goldthwait Cup on Saturday.

The Crimson (7-1) captured the Cup, the most prestigious lightweight title, for the first time since 1997, dethroning the Bulldogs, the defending national champions and winners of the last three Goldthwait Cups.

While Harvard dominated the varsity eight event, its losses in the other four races allowed Yale to win the inaugural Vogel Cup, a points trophy decided by the outcomes of all five races.

The weather on the Housatonic River, in Derby, Conn., was far from ideal. Cold rain and a driving wind made rowing very unpleasant.

“The conditions were pretty bad,” junior two-seat Alex Binkley said. “Good headwind, good waves—we knew it was going to be a rough race.”

“We didn’t have the cleanest start, but once we settled down we were strong,” Binkley said.

The Crimson had the outside lane around the main turn in the course, and saw by Yale and Princeton’s inability to gain on Harvard’s boat that it had the speed advantage. The Crimson held onto its lead through the finish line.

“We rowed a pretty consistent race through the first 1500 meters and held on for the win,” five-seat Dave Stephens said.

After the 78th rowing of the Goldthwait, Harvard’s 37 wins put it 14 ahead of Princeton, which has captured the Cup 23 times. Yale has won 18 times.

The win over the Bulldogs and the Tigers may help push the Crimson back up in the national rankings after it fell from first due to its loss to No. 3 Navy last weekend. Columbia, the top-ranked lightweight squad in the country, did not race this weekend.

In Eastern polls, Harvard sits in fourth, with Princeton and Yale at second and third, respectively.

“I think we’ll be at least in second place,” Binkley said. “That said, they could put anybody in any spot right now. There’s nobody who’s undefeated, so it’s pretty unclear where teams belong.”

“We’ll move up a bit, but we did lose to Navy, so there’s no way to tell where we’ll be,” Stephens said.

The Crimson does not take to the water again until May 11th, when it heads to the Eastern Sprints Championships in Worcester, Mass.

“I think the time off will help,” Stephens said. “It should give us time to make some technical changes that will make us faster.”