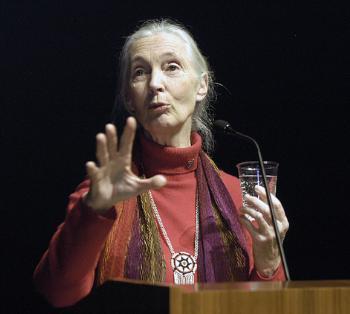 The award—presented by the Harvard Medical School Center for Health and the Environment—was created in 2001 and previously awarded to eminent Harvard biologist E.O. Wilson and actor Harrison Ford.

“All of us have grown up being moved by her stories,” said Eric Chivian, the director of the center.

The main part of the ceremony took place at the New England Aquarium’s IMAX Theatre, where the 400-seat space was packed with an audience that included approximately 30 school children participating in one of Goodall’s youth programs.

The audience was treated to a screening of a new IMAX film called Jane Goodall’s Wild Chimpanzee, starring the primatolgist and her simian friends, and gave a standing ovation at the presentation of the award—a marble dove so heavy that Goodall couldn’t hold it by herself.

In a speech where she indulged both in politics and chimpanzee calls, Goodall described her work as a primatologist and her reasons for branching out into work in conservation.

“When I think about how we’ve harmed the world since I was [my grandchildren’s] age,” she said, “I feel a deep shame.”

She talked about the effect of deforestation on the Gombe preserve in Africa, where her chimpanzee project first started. When she arrived in 1960, the area was lush with foliage.

“Now, outside that tiny area” that is national parkland, she said, “all the trees are gone.”

Goodall said the devastation was a result of “more people living there than the land could support” who don’t have the money to buy food and firewood elsewhere, leading them to ravage the forest.

She founded “Take Care,” a program to help both the environment and the lives of villagers around the national park by such measures as establishing microcredit banks and teaching conservation methods to preserve the forest.

“It has crept around the world,” she said, “it’s a message of hope.”

She said the organization was originally a “young naturalist club” which got its start when she hosted a gathering of Tanzanian high school students interested in the environment.

She said that when she saw a “loss of hope” among young people, she decided to expand the program.

Edging into politics, she said, the group has “a nonviolent philosophy. We do not believe in bombs and guns.”

“Through Roots and Shoots,” she said “we hope to make a powerful, peaceful demonstration that young people want to live in peace.”

Following Goodall’s acceptance speech, there was a reception in the main aquarium. As she signed books, the gathered audience milled about munching cheese and hors d’oevures while inspecting the diverse fish and eating California rolls–sushi that some joked was positioned uncomfortably close to the central penguin tank.