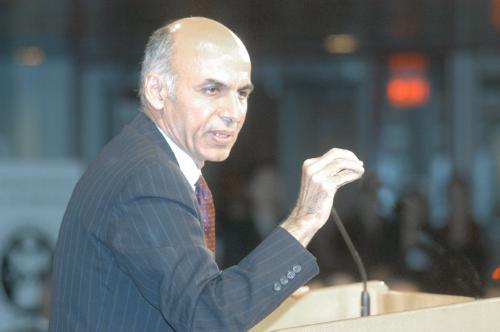 There is a one-year window of opportunity in which to stabilize Afghanistan, the country’s finance minister cautioned a packed crowd at the ARCO Forum last Friday.

Ashraf Ghani spoke of an immediate “need to deliver peace, prosperity and dignity to the people of Afghanistan.”

Ghani, who left Afghanistan in the 1970s and only returned last year to take up his current job, said that he saw three possible scenarios for the future of his nation.

The first scenario, he said, is a pro-Western state with a prosperous private sector.

“The first scenario is the clear desire of the Afghan community,” Ghani said.

However, he pointed to two other possibilities which he said would devastate the country.

If the current Western-sponsored development project were to fail, he said the country would “lurch from crisis to crisis with intermittent successes.”

He also said the country could return to a narco-mafia state controlled by terrorist organizations, warlords and opium traffickers.

In order to promote growth in Afghanistan, Ghani said that legitimate economic activity would have to grow 15 to 20 percent annually over the next five years. To facilitate this growth, he said a major infusion of international capital—including both industrial infrastructure and human technological expertise—would be needed.

“There is far too much money in Afghanistan and far too little capital,” said Ghani, who previously worked as an anthropologist at the World Bank.

But Ghani said that while foreign aid has its benefits, it can also undercut the sovereignty of a developing nation’s government.

He said the Afghan government must be involved in determining how aid is spent, or the people will lose confidence in its authority.

“The government must be seen as the one making decisions and taking responsibility,” Ghani said.

And he said the easiest way to promote foreign investment and encourage the country’s private sector is to make Afghanistan’s fledgling government more transparent and predictable in the eyes of the country’s populace.

“All information must be in the hands of the citizens,” he said. “Trust is established by being transparent.”

Ghani also stressed the importance of security. He pointed to his country’s national army and police force—still in their infancy—as the source of such security in the future. However, he said the continued threat of terrorist cells operating in the country creates a serious impediment to economic growth.

“We have terrorist networks that must be destroyed to have peace,” he said.

He also addressed the issue of education, especially for girls, and Ghani said that currently 40 percent of all enrolled students are female.

The future of Afghanistan’s economic development has international implications that Ghani said he feels are too significant to ignore. If the present situation fails to stabilize, he said that the international community will pay a higher price in the future than the cost of putting the country on the road to prosperity right now.

“[If Afghanistan’s new government fails] the international community would have lost a unique opportunity to illustrate that the clash of civilizations can be avoided,” Ghani said.

The speech was the keynote address of the ninth annual Harvard International Development Conference, entitled “Governance and Development in a Dynamic Global Environment,” which took place this past weekend.