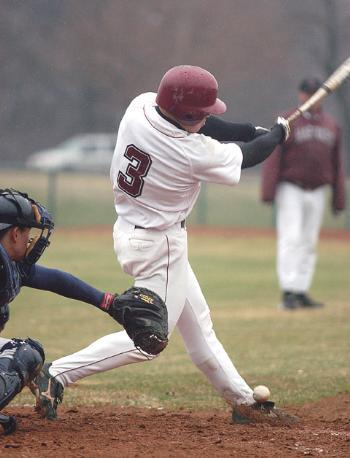 Entering its Ivy-opening weekend at Penn and Columbia, the biggest question mark for the Harvard baseball team was its starting pitching. As it turned out, the Crimson rotation was its greatest asset.

But the bullpen couldn’t hold on in either day’s nightcap. Harvard split on the road with the Quakers Saturday, winning 11-6 and losing 6-4, before splitting again at Columbia yesterday, taking the opener 8-4 before falling 3-1.

Despite the encouraging performances from its starting staff, the Harvard team saw this weekend as one of missed opportunities.

“The Ivy’s such a short season that every loss hurts and every loss comes back to bite you in the final stretch,” Ronz said. “I think these two losses may come back to hurt us because we are a better team than those two teams and we should beat them.”

With freshman Matt Brunnig remaining in Cambridge this weekend to pitch in a junior varsity game to rehabilitate a sore shoulder, the Crimson (7-12, 2-2 Ivy) didn’t even know who would start yesterday’s second game until Harvard coach Joe Walsh tapped Self the night before.

Still, Walsh was prepared to trot out arm after arm, having limited senior Brendan Reed and freshman Wes Cosgriff in Wednesday’s rain-shortened 3-0 loss to Rhode Island to keep each fresh for possible use yesterday. Walsh also notified Cosgriff he would be the first to relieve Self.

As it turned out, Walsh needn’t have worried. Self went 7.1 innings and was virtually untouchable over the first seven, giving up only three hits—all singles—and not walking anyone.

Columbia’s Ray Waters led off the last of the eighth with a single but got caught in a rundown and tagged out trying to steal second. Michael Anderson followed by drawing the only walk Self gave up all day, and Andrew Hooker singled him to third, chasing Self in favor of Cosgriff with Harvard ahead 1-0.

Cosgriff couldn’t hold the lead, as the Lions (12-14, 4-4) plated three runs before the rookie lefty shut the door with a strikeout.

Jessen Grant, who befuddled the Crimson hitters all afternoon with his sidearm delivery, closed out his complete game by sending Harvard down 1-2-3 in the ninth.

Hendricks accounted for the entire Crimson offensive production with a solo home run to lead off the fifth.

When Columbia sent seven batters to the plate in the first, scoring three on four hits, it looked like Ronz was in for a long afternoon. He was—just not the kind the Lions would have hoped for.

In the second, the lefty threw a big curve for a strike on a full count, inducing a groundout and spurring his confidence for the rest of the game.

“After that, I decided I could throw the curveball for a strike, so it just ended up working much better,” Ronz said.

Settling down, Ronz only gave up two hits over the next six innings and didn’t concede a run after the second in recording the win, his first of the season.

“It felt good to be able to have three pitches to throw for strikes,” Ronz said. “They can’t just sit on the fastball. You can make them guess a little and you can fool them with different pitches, not just different locations. It makes things a little easier.”

Ronz’ performance also intiated a significant reduction in the number of free passes given up by the Crimson staff.

Harvard had four walks and didn’t hit anyone on Sunday after walking seven Lions and hitting five on Saturday.

The Crimson manufactured a run in the first as freshman second baseman Zak Farkes was hit by a pitch, advanced to second on a passed ball, took third on a wild pitch and scored on a single by Hendricks.

In the second, Harvard retook a one-run lead. Freshman third baseman Josh Klimkiewicz led off with a homer before the Crimson returned to small ball. Freshman leftfielder Chris Mackey drew a walk and was moved over to second on junior centerfielder Bryan Hale’s groundout.

“Chris Mackey always does the right baseball play,” Ronz said. “A lot of his at bats are situational.”

Freshman rightfielder Lance Salsgiver singled, with Mackey moving to third and then scoring as the opportunistic Farkes reached on an error. Senior catcher Brian Lentz flew out, moving the runners up 90 feet, and Salsgiver scored on a passed ball.

Harvard blew the game open in the third, breaking a 4-4 tie with two home runs—a leadoff solo shot by sophomore catcher Schuyler Mann and Hale’s second bomb of the weekend. The Crimson then loaded the bases again on a Salsgiver double, two walks (one intentional) and two stolen bases, but Hendricks struck out swinging and Mann grounded out to end the threat.

The Crimson had nine hits in the second game against Penn (14-10, 6-2), but only one—Hale’s leadoff jack in the fifth—went for extra bases, forcing Harvard to turn to the running game for its offense. Crimson baserunners stole three bases on the day and were caught stealing twice more.

Harvard staked Hendricks to a 2-0 first-inning lead on two singles, a double steal, a fielder’s choice, an error and two RBI groundouts.

The Crimson looked poised to score again in the fourth with runners on first and second and nobody out, but Harvard—in a pattern that repeated itself all weekend—couldn’t come up with the timely hit. Klimkiewicz was caught stealing and Mackey grounded into a double play to end the inning.

After plating two more runs in the fifth, the Crimson bats went cold, as the Quakers sent them down 1-2-3 in each of the last four innings.

Meanwhile, Penn touched the Harvard bullpen for three runs in the bottom of the eighth for the win.

It was the second time in three starts that Hendricks left with a lead, only to see the Crimson lose.

“[The bullpen] got put in a couple of tough situations where you either are the hero or you kind of want to forget about it,” Morgalis said.

The Crimson had rallies end twice when players were caught stealing with two outs but Harvard still had enough offense to take the victory in its conference opener. Morgalis, a transfer from Notre Dame, went 5.2 innings, giving up six runs—three earned—to pick up his first collegiate win in his introduction to Ivy baseball.

“It’s like any other conference,” Morgalis said. “The games mean a whole lot more.”

Harvard turned a 5-3 lead into a 10-3 advantage with a five-run sixth that started with a Hendricks double and featured a two-RBI single by sophomore shortstop Ian Wallace and an RBI double from Farkes.

Penn came back with three runs in its half of the sixth, but captain and closer Barry Wahlberg came on and struck out Andrew McCreery, who had earlier hit a three-run homer, to end the Quaker rally. Wahlberg shut the door in the seventh to secure the victory.

Every Crimson batter recorded at least one hit.

Now that the Crimson has readjusted to the cold weather—which was especially hard on relievers called upon to enter the game on short notice—after a spring break trip to Florida, it should be prepared for a stretch of nine consecutive games in the Boston area, beginning Wednesday when it hosts Holy Cross at 3 p.m.