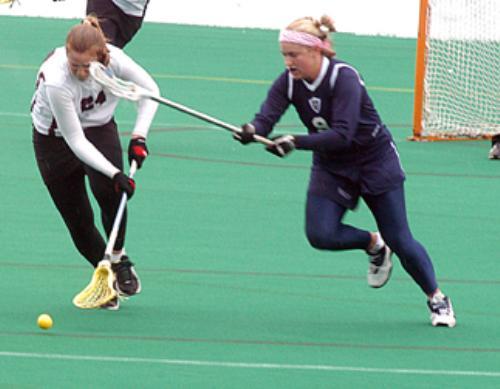 The Harvard women’s lacrosse team braved the elements against Yale on Saturday at Jordan Field, but it could not weather the Bulldogs’ scoring barrage.

The start of the game was delayed for an hour while maintenance plowed the field, but rain and sleet continued to pour down during the game.

Yale (6-2, 2-1) started strong, with Miles Whitman netting a goal just two minutes into the game. Harvard junior goaltender Laura Mancini was then forced to make a number of saves over the next five minutes before Owens tied the score at the 23:59 mark off an assist from Shaughnessy.

But the competitive start proved illusory. The Bulldogs dominated the flow of the game, retaining possession for the vast majority of the contest and consistently pressuring the Crimson. Aside from a few strong runs from its wingers, Harvard had difficulty stringing together passes and getting the ball out of its defensive end.

“In the past two games our opponents have probably had possession for about 70 percent of the time,” said Mancini, who tallied 16 saves. “If we don’t keep the ball, we can’t attack and score.”

The Yale offense was led by a four-goal, eight-point performance from Whitman. Katherine Sargent also had four goals, while Caroline Petrovick added a hat trick.

Throughout the game, the Bulldogs showered the Harvard goalies with a steady torrent of shots, while the Crimson repeatedly failed to take advantage of its offensive opportunities.

“We recognize that we have the talent that we need to win, [but] we need to start taking advantage of our opportunities,” Mancini said. “Every loss is a hit to our confidence.”

While Harvard has started the season poorly, the team still has five Ivy contests remaining, including a game against Penn Saturday at Jordan Field.

Before falling to Yale this weekend, the Crimson suffered a tough 13-2 loss to crosstown rival Boston University on Wednesday at Nickerson Field.