No. 44 Harvard downs No. 45 William & Mary with thrilling victories from Lingman, Nguyen, Chiou and Chu in singles competition 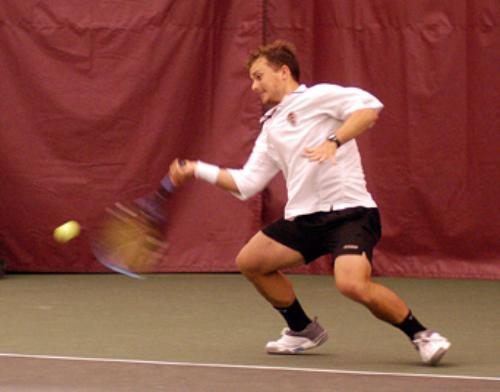 Junior GEORGE TURNER dropped his singles match against William & Mary 4-6, 4-6 before rebounding against Dartmouth with a 6-1, 6-3 straight-set win at the No. 4 spot.
By Ashwin M. Krishnan, Crimson Staff Writer

The Harvard men’s tennis team is peaking at just the right time of year. With a four-game win streak, the Crimson is in great form as it faces Ivy League foes in the final weeks of the regular season.

“Dartmouth is a strong team,” Crimson coach David Fish ’72 said prior to the match. “But they are not as strong as they have been in the past.”

In doubles, co-captain Oli Choo and junior Cliff Nguyen were easily victorious, 8-2, in the No. 3 spot, while junior Chris Chiou and sophomore Jonathan Chu won a tough 9-7 match at No. 2.

“The doubles matches were more challenging than the singles matches, but once we got focused we were really in a groove,” Choo said.

Against No. 45 William & Mary on Saturday, Harvard got on the scoreboard first by winning two-of-three doubles matches to earn the doubles point.

The tandem of Lingman and Riddell at No. 1 and Chiou and Chu at No. 2 both earned 8-5 victories.

In singles, the Tribe (14-8) showed its resilience by fighting off several match points in three important matches, but the Crimson prevailed in all of them.

“This was our first home game in a while,” Nguyen said. “But I thought we really adjusted well and earned a solid victory.”

The only match that went the distance was Chu’s come-from-behind, 4-6, 6-3, 6-4 victory at No. 3. During the third set, the match was moved to court one to accommodate the women’s tennis matches. The change only helped Chu, as his teammates filled the bleachers to support him.

“It was a big transition to come indoors, but our team responded well,” Fish said. “Doubles have been important for us all year long, and today our teams were solid. Our team is healthy and we are moving in the right direction.”

Harvard will be at home this weekend, facing Columbia on Friday at 2 p.m. and Cornell on Saturday at noon.