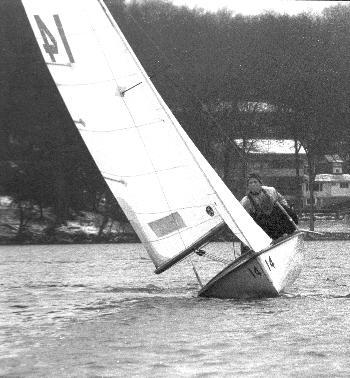 Senior MICHELLE YU and freshman VINCE PORTER raced for the Friis Trophy this weekend, where Harvard tied for second after a controversial call.
By Timothy M. Mcdonald, Crimson Staff Writer

A wintry mix of weather greeted the Harvard sailors on waters throughout the northeast this weekend, and with that mix came varied results.

The format for the co-ed and women’s teams differs a little from regatta to regatta, but follows this general process: two teams place a skipper and a crew member in three boats.

The six boats sail around the course, aiming for the lowest cumulative score.

Each victory over another team counts for one point, and all the teams face each other on the regatta’s first day. The second day has the top teams competing in round robins for the trophy.

The co-ed team competed on Mystic Lake in Medford for the Friis Trophy, tying for second in a competitive field. The Crimson came in behind Tufts and Yale, and just ahead of Dartmouth. Although that finish sounds close, it was in fact even tighter.

The regatta’s outcome and eventual winner were decided in a protest that Tufts won over Harvard, that bumped Tufts up to first, with a final record of 12-3, and dropped the Crimson into a tie for second with Yale at 10-5. Had Harvard won the protest, the Crimson and Tufts would have been locked at 11-4, and Harvard would have won the tiebreaker after beating Tufts in head-to-head racing.

Although the team was disappointed with the ruling, most of the sailors were pleased with the coordination and strategy they showed on the water.

“Our team racing style is very tactical, grounded in our ability to carry out maneuvers on the water more effectively and quickly than other teams,” said senior Michelle Yu. “Some teams adopt a more opportunistic style of team racing, just sailing the shifts and not carrying out plays. Our strategy needs time to practice and perfect.”

“Our team race qualifiers are in three weeks, and we are going to have to practice a lot to get back up to speed, but I think that we are still clearly one of the best teams in our district,” said junior captain Cardwell Potts.

With three weeks remaining before the New England Championships, Harvard is already well positioned. Three New England teams will qualify for Nationals, and if the Friis had been the qualifier, the Crimson would have made the cut.

The women’s team, sailing for the Ted Ferrarone Team Race Trophy at Yale, met with less success than its co-ed counterparts, finishing 4-6 on the weekend and in ninth place overall. Many of the team’s losses came off poor starts. In the races the team started well, it overtook close competitors such as host Yale, Boston University and Salve Regina.

Partially due to those wins, junior skipper Clemmie Everett saw a silver lining in the storm clouds that covered the regatta on Saturday.

“We had some trouble getting off the starting line, and, despite good boat speed, were unable to get back into several of the races,” Everett said. “We had strong performances in the races that we did start well. I think we made notable progress over the course of the weekend.”

And similar to the racing on Mystic Lake, Harvard thought the experience in a team race setting would pay dividends later.

“[One of] our objectives this weekend was to get practice sailing 420s at a relatively open water site, in order to fine tune our boat handling technique for women’s New England’s at Brown in two weeks,” Everett said.

And while the team did get experience this weekend, it will need a good deal more fine tuning in order to qualify for Nationals. The team will also get a chance to preview the site for the New England Championships when it travels to Brown next weekend for the Dellenbaugh Trophy, while the varsity co-ed team will sail for the Admiral’s Cup at the US Merchant Marine Academy in a three-division regatta.