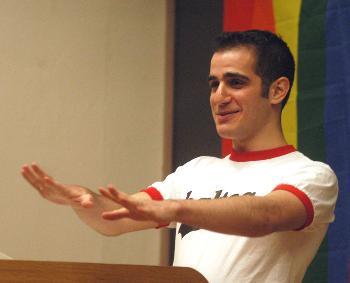 OUSSAMA ZAHR ’03 speaks during a meeting in Sever Hall Friday to kick off “Gaypril,” a month of events that will include celebrations of gay pride and a day of silence to promote awareness of homophobia.
By Eden B. Mcdowell, Contributing Writer

About 25 students gathered in Sever Hall Friday to kick off “Gaypril,” a month of events slated to include celebrations of gay pride, a queer sex toy party and a day of silence to promote awareness of homophobia.

Associate Dean of the College David P. Illingworth ’71 opened the festivities Friday and praised the groups involved in planning the events.

“Maybe someday we can fly one of these in front of University Hall,” Illingworth said, referring to the two gay pride flags that adorned the corners of the room.

The Bisexual, Gay, Lesbian, Transgender and Supporters Alliance (BGLTSA) is organizing Gaypril along with BOND and Girlspot.

According to BGLTSA Political Chair Oussama Zahr ’03, events include a night of clubbing, an anti-homophobia speak-out on April 10 and a discussion about whether to hold a “kiss-in” where same-sex couples would kiss outside the Science Center.

Illingworth said his 18 years of work in the College’s admissions office had made him particularly aware of the importance of creating a community that fosters diversity, and that the BGLTSA is “in a position to tell others that everyone is welcome here.”

Illingworth acknowledged the presence of homophobia on campus, and he said that he would not stand for “official homophobia.”

BGLTSA Public Relations chair Mike B. Murphy ’03, said he hopes the month’s events will challenge students to be tolerant, create a better sense of community and work against the perception that the gay community is “an accepted anomaly.”

“I want to tell you what an amazing time it is to be an activist,” Wu said.