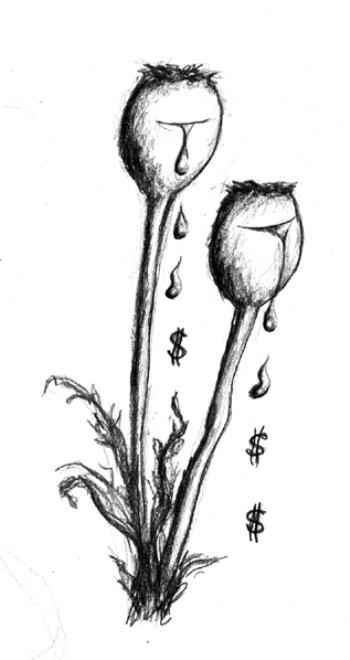 Over the past couple weeks, the media has struggled to broadcast every Pentagon press release, presidential pronouncement and embedded report on the war on Iraq. Almost all other issues have been left in the dust, such as the fate of the small Central Asian nation that was the site of our last attempt at national liberation. But, even after fading from the attention of the Bush administration and the American media, Afghanistan is still plugging away.

In fact, now that the Bush administration no longer needs them as examples of American benevolence, the Afghan people have found a not-so-new way to get by in a country so ravaged by decades of war that the $75 billion Bush is spending on Iraq would nearly quintuple their GDP. Without the foreign aid they need, the Afghan people have turned to opium cultivation. Afghanistan produced nearly 4,000 tons of opium—75 percent of the world supply—in 2000, before the Taliban nearly ended production in 2001. With the Taliban gone and their economy in shambles, Afghanis are going back to the one industry that hasn’t been destroyed by war.

The Afghan drug trade is back in a big way, according to an article buried in the World News Briefs section of The New York Times. Afghan farmers produced 2,400 tons of opium in 2002, and that number is said to be growing rapidly. And who can blame them? The Bush administration didn’t even propose a humanitarian aid package for Afghanistan in 2002. While the administration found hundreds of billions of dollars for the wealthiest American taxpayers, they couldn’t seem to scrounge up anything for the poorest of the world’s poor.

The president has repeatedly claimed that America’s commitment to peace and prosperity in Iraq will be as great as its current commitment to regime change. But his record in Afghanistan shows that when the last bombs have fallen, this president’s mind tends to wander, and commitments made to starving people give way to tax cuts and new military adventures. If we want a lasting peace and a country that is not hated around the world, the American people must ensure that Iraq is not forgotten as Afghanistan has been. Afghanistan’s return to the opium trade should remind us that ravaged and neglected countries often revert to old ways. If we fail to secure the peace in Iraq, whatever progress we buy with American, British and Iraqi blood will go up in smoke.