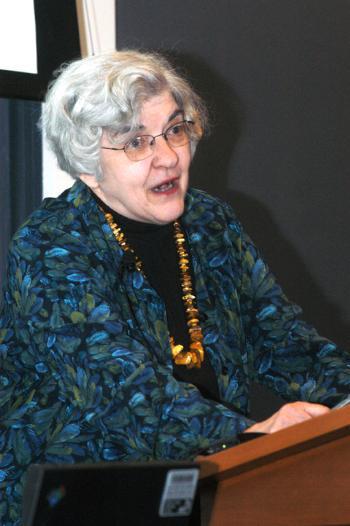 A day after the solemn commemoration of Holocaust Remembrance Day, the Harvard Law School ArtsPanel hosted a discussion of the legal and ethical issues surrounding the restitution of Nazi-looted art.

During the sparsely attended panel in Langdell Hall, experts explored the impact of the war on cultural treasures and the legal intricacies involved in repatriating stolen art.

“This is the most riveting, urgent museum topic of the decade,” said lawyer Martha Lufkin, who is a legal correspondent for The Art Newspaper and an expert in recent cases involving claims for the restitution of Nazi-looted art. “It has proved that museums do not occupy an ethically aloof space in owning objects.”

Panelists discussed their concern about the legacy left by the Nazis, who they said committed the biggest displacement of cultural treasures, books and archives in history during World War II. According to Lufkin, the Germans expropriated art owned by the Jews and either sold or destroyed what they considered to be “degenerate art.”

While much of the stolen art has not been recovered, Lufkin said the issue of repatriating art seized during the war was not discussed until the 1990s.

“The end of the Cold War made a lot of talk happen that had been silenced,” Lufkin said. “Public attitudes towards museums became critical.”

Lufkin described a series of scandals in many of America’s leading museums where people questioned the source of their pieces.

At the Art Institute of Chicago, she said, it was revealed that a Degas painting that the museum received as a gift had been stolen from a man who died in a concentration camp.

Lufkin said these events raised awareness of restitution issues and forced museums to consider where works came from before buying or borrowing them.

The panelists said the discussion was particularly relevant now because of the recent conflict in Iraq.

Assistant Professor of History Terry D. Martin ’85, who moderated the panel, kicked off the discussion by reminding the audience of images of Baghdad depicting the destruction of monuments, statues and other cultural artifacts.

“As the events of the last few weeks have showed us, war is not good for the antiquities,” he said.

According to Grimsted, all countries fighting in World War II had “art protection brigades of some sort or the other.”

She said she believes that the percentage of art destroyed in Iraq has been much greater than in World War II.

While panelists praised the U.S. for its program of art restitution following World War II, they said the inconsistency of laws and ethics in different countries still complicate the politics of restitution.

Fogg Museum Assistant Curator Sarah Kianovsky said she has experienced the difficulty of tracing the ownership history of paintings through her position as assistant curator at the Fogg.

“I don’t consider anything clean,” Kianovsky said. “New information can always come up that could change everything.”

She suggested that in order to deal with the difficulties of tracing ownership, museums must have the freedom to exchange information with researchers and heirs, a willingness to accept inconclusive results—and patience.