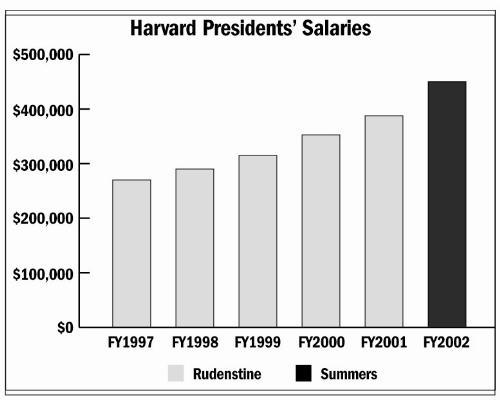 Former University President Neil L. Rudenstine made $421,081 in salary and benefits during his last year in office in 2001.

But Rudenstine received more than $750,000 in the year following his resignation. Of that amount, he earned a base salary of $200,000 as president emeritus. The remaining $533,018—filed as an “expense account and other allowances”—subsidized moving expenses, loan payments and forgiveness, a retirement payment and “gifts in honor of service.”

Rudenstine could not be reached for comment last night.

He also received $29,117 for housing outside Cambridge and personal travel used to visit his three children, who live in Washington, D.C.

Summers declined to comment on why his salary was higher than Rudenstine’s had been.

“Any salary is a private negotiation between the Corporation and the president,” University spokesperson Joe Wrinn said. He said he did not know how much Summers was being compensated for the current fiscal year.

According to a report last November in the Chronicle of Higher Education, 27 presidents at private colleges broke the half-million dollar mark for the 2001 fiscal year. The year before, only 12 presidents earned that much.

No comprehensive survey of presidential salary data for the 2002 fiscal year is available, so it is not yet clear whether this trend has continued.

However, a sampling of salary data revealed a broad range of compensation levels at Harvard’s peer institutions.

Former University President Derek C. Bok has argued that the rising level of presidential salaries is part of a dangerous trend in education.

“A huge presidential salary tends to exacerbate tensions that too often exist between faculty and administration,” Bok wrote.

“The influence of money is already too strong on many campuses, distorting priorities, distracting faculty members, and eroding academic values,” he added.

In addition to Summers and Rudenstine, the top Harvard earners for fiscal year 2002 were Dean of the Medical School Joseph B. Martin, who received $445,399 in total compensation, and Dean of the Business School Kim B. Clark, who made a total of $407,700.

University Provost Steven E. Hyman netted $201,724, and Vice President for Community, Government and Public Affairs Alan J. Stone earned $257,365, including a $67,511 signing bonus. These figures, however, reflect less than a full year of service, as both of these administrators arrived at Harvard last fall.

As a private, tax-exempt, nonprofit organization, Harvard is required each year to make public its federal tax return, which includes compensation information, functional expenses and other such data.

Harvard’s form was due in February, but the University filed an extension request until May 15.