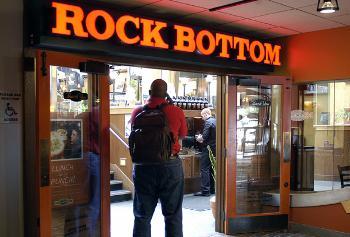 Rock Bottom, known for its burgers and beer, will close its doors June 15. It is the most recent of several Harvard Square establishments popular with student to go out of business in the past few years.
By Michael A. Mohammed, Crimson Staff Writer

Citing financial difficulties, Rock Bottom, the microbrewery and restaurant next to Fire and Ice on Church Street, will be turning off its taps and closing its doors for the last time June 15.

The closing of the popular bar continues a trend of bar closings in the Square.

T.G.I. Friday’s closed last year, the Crimson Sports Grille closed in 2001, and the Bow and Arrow Pub closed in 2000.

Mark B. Erwin, a supervisor at Rock Bottom, attributed its closing to the “too high” rent charged by the building’s owners, Trinity Properties.

“This location is tough because it’s away from the street,” Erwin said. “The menu doesn’t seem to be what Cambridge people want.”

He said he thought the laid-back atmosphere and American cuisine might not deliver what locals are seeking.

“It’s just burgers and beer, a fun place to hang out,” he said.

“Loyalty within the community is very strong,” Poola said.

She mentioned that strong student patronage is not enough to keep Rock Bottom open.

“It’s just a portion of our customer base,” she said. “Ultimately, it was a business decision.”

Matthew H. Eckhouse ’04, who has come to call Rock Bottom “The House,” expressed frustration over the loss of what he sees as Cambridge’s only affordable bar.

“On any given night, you can hang out there for hours…and spend less than $10 doing it,” Eckhouse said.

He said he feels that the bar’s closing is part of a greater trend.

“Losing Rock Bottom is just another blow to our ability to enjoy our college years at Harvard,” Eckhouse said. “The Grille has been replaced by the yuppie $5-beer Redline.”

The disappearance of Rock Bottom will signal the fourth consecutive year that a bar popular with students has closed in the Square.

—Staff writer Michael A. Mohammed can be reached at