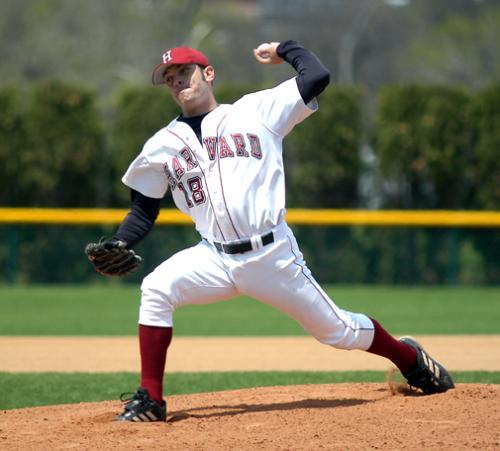 It was far from inevitable, but to captain Barry Wahlberg, it only made sense that Harvard, and not Dartmouth, was going to advance to the Ivy League Championship Series.

It did just that yesterday by sweeping a doubleheader with the Big Green.

“There’s a reason why us and Princeton end up in the championship every year,” said Wahlberg, who pitched the final 5.2 innings of the series finale to clinch Harvard’s second straight Red Rolfe Division title. “We’re the better team.”

After seeing their team come within one win of playing for an Ivy title, Dartmouth’s fans might beg to differ. But they weren’t available for comment yesterday—Harvard (19-21, 11-9 Ivy) had shut them up.

With 19 hits on Sunday, the sound of the Crimson’s hitting parade drowned out the Big Green’s loudmouth brigade, whose merciless taunting of Harvard’s players had helped lift Dartmouth (17-19, 10-10) to a sweep of Saturday’s doubleheader in Hanover, N.H. Harvard coach Joe Walsh admitted that Dartmouth’s rude behavior on Saturday made yesterday’s victories all the more satisfying.

“After [Saturday’s] fiasco—we took a lot of grief from their fans—I thought the guys really wanted to win,” he said.

Harvard couldn’t have done it without gutsy pitching efforts from senior Kenon Ronz in game one and—after freshmen Javier Castellanos and Morgan Brown both proved ineffective—Wahlberg in game two.

Now, just like last year, the Crimson will face the Tigers, winners of the Lou Gehrig Division, for the Ivy crown and the league’s automatic bid to the NCAA tournament. The best-of-three series begins Saturday at Princeton.

Without a clear fourth starter because of the injury to junior Trey Hendricks, Walsh found success with his “Captain Hook” strategy and sent the Big Green to Neverland.

Walsh cycled through two pitchers before he found one that worked in its closer. But even Walsh never thought Wahlberg, who’s nursed a sore finger for much of the season, would be able to pitch very long when he entered in the fourth inning.

“By the time we got to Barry,” Walsh said, “I really thought we were going to get one inning, maybe two, out of him because of that blister.”

But the injury proved not to be a factor, as Wahlberg held off Dartmouth just enough and let the Harvard bats do the rest.

“We knew they didn’t really have a No. 4 [starter] and we didn’t have a No. 4, so we knew it was going to be a slugfest,” said senior catcher Brian Lentz, who went 5-for-5 in the game. “No lead’s safe with the metal bats, in truth. On a day like today when we brought our closer in in the fourth inning, you know you’re just going to have to outlast them.”

Harvard scored six runs in the first when it sent six men to the plate. But Dartmouth came all the way back to tie the game 7-7 before freshman third baseman Josh Klimkiewicz hit a three-run blast and pinch hitter Rob Wheeler added an RBI single in the fourth.

“I thought the Klimkiewicz homer was huge,” Walsh said.

Every Harvard starter but one had at least one hit and three—Lentz, sophomore Ian Wallace and freshman Lance Salsgiver, who hit a leadoff homer—had at least three.

With Salsgiver, who has never pitched in college, waiting in the wings if needed, Wahlberg retired the side in order in the ninth to ensure that Harvard’s season will last at least one more week.

“We wanted to keep playing,” Walsh said. “We’ve got too many good kids, and we’ve worked too hard to shut it down on May 5. I’m just real proud of the way they came back today.”

For all the turmoil of Saturday’s sweep at Dartmouth, one thought kept Harvard confident going into yesterday.

“We knew we had Kenon on the mound,” Walsh said. “I’ll tell you, I slept well last night. I went to bed feeling real good about today.”

Ronz (3-2) didn’t disappoint, cementing his status as staff ace by scattering seven hits and three runs over his seven innings. He outdueled Tim Grant, Dartmouth’s No. 1 starter and master of a hard slider, for the win.

Trailing 1-0 in the second, Harvard took the lead on an RBI double by Klimkiewicz and a bloop RBI single by junior Bryan Hale.

Dartmouth went ahead 3-2 in the fifth, but the Crimson responded with three runs that same inning. With the bases loaded, Hale hit a grounder to short. Dartmouth got the force at second, but second baseman Josh Bailey botched the relay throw to first, allowing Lentz and Mann to score and Hale to advance to second.

Ronz had no walks and nine strikeouts. He struck out the side in the seventh to close out the win.

“I was pitching for my life out there,” Ronz said. “I didn’t know if I’d ever pitch again.”

Ronz might have had some extra motivation playing against Dartmouth. Walsh revealed after the game that he had been told of some murmuring by the Big Green coaches regarding Ronz’s invitation to pitch for the Cape Cod League’s Wareham Gateman two summers ago.

“I know there were some remarks that stemmed from [the fact] that they couldn’t believe that he got down to the Cape League and some of their players didn’t,” Walsh said. “Those remarks got back to me. Kenon’s a class player—he wouldn’t say anything. But he had a little extra juice going today.”

Ronz refused to give specifics about the matter but did not have any nice things to say about the Dartmouth coaches.

“From what I hear,” Ronz said of Big Green coach Bob Whalen, “he’s not the greatest individual.”

It wouldn’t be a Dartmouth weekend without some suspense. Harvard made sure both of yesterday’s games would be interesting when it dropped the second of its two games on Saturday, 18-5, at Red Rolfe Field.

An eight-run inning blew the game open for Dartmouth in the eighth. Harvard never led but had trimmed the Big Green’s lead to 7-5 in the seventh thanks to three Dartmouth errors.

Harvard starter Mike Morgalis (3-3) was chased after five innings. Not long after that, Walsh was in desperate search of anyone who could record outs so his team could just get on the bus and go home.

The attacks grew increasingly personal as the day went on. The Big Green’s fans went looking through the players’ media guide bios to make fun of the Crimson players’ families and home situations.

“It’s not baseball when they’re talking about mothers out there,” Wahlberg said.

Dartmouth showed little tact on the field, either. In the eighth inning, with Harvard already trailing 16-5, Dartmouth’s Seth Emery successfully stole third base—an act which Ronz noted yesterday was not appreciated by the Crimson.

Freshman pitcher Matt Brunnig received more than his share of harassment from the Dartmouth crowd in Saturday’s 2-1 loss, but his resolve was unswerving.

Two of his deliveries in the first inning were not.

Brunnig plunked two of the first three batters he faced and the fourth, Dartmouth co-captain Mike Mileusnic, stroked a hard grounder up the middle that just snuck past Farkes to give Dartmouth a 1-0 lead.

Although the Crimson got the run back when Mann homered on a line shot to straightaway left in the top of the fourth, Dartmouth took the lead back for good in the bottom of the inning when Harvard failed to convert a double-play opportunity.

The loss spoiled a fine effort by Brunnig (3-3), who has surrendered just eight hits in his last two starts and whom Walsh named yesterday along with Ronz as one of his definite starters against Princeton this weekend. Patrick Dowling (4-2) earned the win for Dartmouth.