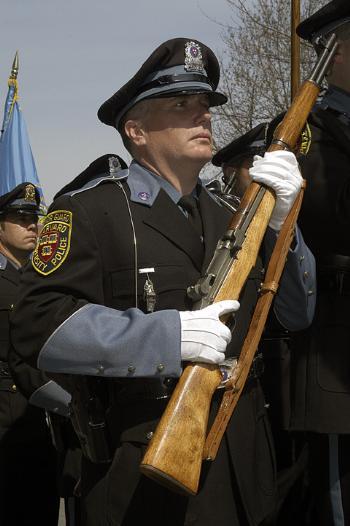 To the supportive cheers of 800 friends, family and police around the area, the new officers from 11 area police forces received their graduation certificates and their badges—the official hallmark of a police officer.

The ceremony began promptly at 10 a.m. with a procession across Kirkland Street and into the packed theater. Led by the honor guards of five departments accompanied by the Boston Police Gaelic pipes and drums, the 51 graduates of the 10th Municipal Police Officers Class (MPOC) marched in a crisp military formation, executing crisp turns with their backs ramrod straight and their white-gloved hands moving in rhythmic synchrony.

Inside, graduation speeches built on the dual themes of the stressful occupation and the honor and duty that accompany it. The MBTA’s police chaplain spoke about the obstacles that face police officers—longs hours, tedium, chaos, low pay and the constant worries that saddle loved ones.

“No parents want their children to be in harms way,” he said, head bowed.

Chief of MBTA Police Joseph C. Carter spoke about the meaning of being a police officer, and HUPD Sergeant Richard Mederos, who helped train the recruits during their 22 weeks in the academy, offered advice and congratulations.

The ceremony culminated when friends and family members, often in uniform themselves, approached the stage to pin the badges on the lapels of the graduates.

“We invite you to pin these officers and share a Kodak moment,” emcee MBTA Lt. Michael McDonough joked.

From family traditions and public service to teamwork and camaraderie, Friday’s graduation marked a time when the new officers shed any presumed gruff demeanor to express pride in their profession and community.

The challenges that face police officers are far outweighed by the rewards that they reap, they concluded.

Proud To Be Blue

New HUPD Patrolman Gordon Gillis traveled from Canada so he could train at the police academy and fulfill his long-standing dream of becoming a police officer. After hearing that HUPD was looking for new recruits, he visited the campus and interviewed with HUPD officials before being accepted into the new class.

“[I like] the whole experience of being an officer with guys I know,” he said.

His wife, Christine, who calls Gillis a “people-person” and daughter, Amy, will move to Cambridge in the coming months. Amy said that the best part of her dad’s new job is that she gets to brag about him.

Mederos, HUPD’s executive officer, said the caliber of the officers is a strength of the unique department.

“It’s a special community,” he said. “There’s a lot of history and tradition at Harvard, just like police work is filled with tradition.”

In his speech to the graduates, the MBTA’s Carter stressed that in any police department, officers are connected outside their own community—they are members of an extended family of police officers who are bound by pride, honor and duty to their communities.

“As police officers you will form the first line of defense,” Carter said. “Never lose sight of the reasons why, and for whom, you have sworn an oath. You have the opportunity to make a difference in the lives of countless individuals.”

“You will encounter moments of tribulation and great satisfaction,” he added.

Mederos told the graduates during his speech that the most important qualities they can possess are “pride in yourself, confidence in your abilities...and dedication to the great profession you have chosen.”

He advised the graduates to remember to use common sense, show compassion and to always maintain a sense of humor.

“[You] have to keep in check some emotions. Sometimes it will be worth the sweat and hard work,” Mederos said. Great opportunities to help others seldom come, but little ones surround us daily.”

HUPD Chief Francis D. “Bud” Riley said that the new officers, the second-largest class that Riley has hired in his eight years as chief, would make a valuable contribution to the department.

“It’s a great class. It makes Harvard proud of its accomplishments,” Riley said.

The training started 22 weeks ago, when the recruits from across the Boston area—including significant contingents from the Newton and Waltham police departments—began their training at the police academy in Quincy.

Waltham officer Kevin Sullivan, who received the class’s academic achievement award, addressed the class and spoke to the intense academic, athletic and skills training that turned him and his fellow recruits into officers.

“We were challenged physically, intellectually and emotionally. At times, we were pushed to the limit,” Sullivan said.

He recalled the inspirational mottos posted on the walls of their classrooms, such as “Slackers need not apply” and “The easiest thing in the police academy was yesterday.”

“They endured cold morning runs...sprained ankles, bad knees and terrible colds to finish a workout with the class,” he said. “It’s incredible to watch them grow from individuals to a team after 22 weeks.”

Sullivan said that the training was well worth the effort because of how integral police officers are to the safety of civilians today.

“We are entering public service...at a critical time in our nation’s history [when] safety and tranquility cannot be presumed,” he said. “May our communities benefit from what we have learned and brought back with us so we can serve them.”

It Runs in the Family

Many of the officers graduating Friday were following in the footsteps of relatives who had steeped them in the workings of law enforcement.

New HUPD Patrolman Ryan Stanton, whose father, Captain Jack Stanton, has been with HUPD for over 30 years, said his father’s job was the driving force behind his desire to join the force.

“I grew up in the atmosphere. I always wanted to do what he did,” Ryan Stanton said. “This is a great opportunity for me in life.”

Capt. Stanton, the department’s third-highest ranking office, said he was proud his son was following in the family tradition: His father had been a Cambridge police officer, and his grandfather was a Cambridge fireman.

Similarly, one of the four female officers in the 10th MPOC, Waltham officer Jennifer Drew said she wanted to become an officer because her father is the chief of police in Hingham.

Even those who don’t have a family history rooted in police escapades are still attached to the public service that police officers provide.

HUPD officer Jose Gonzalez, who was first a security guard at Harvard and has spent the last six years as a dispatcher at HUPD, said he’ll be happy to get out of the station and help people in person.

“I enjoy helping people, whether [with directions] or medical assistance,” Gonzalez said. “I can go out and do more for the community as a police officer instead of on the phone.”

New HUPD officer Steven Fumicello, whose father and brother are both police officers, said he’s excited to get started.

“I’m just anxious to do what we’ve been trained to do,” he said.