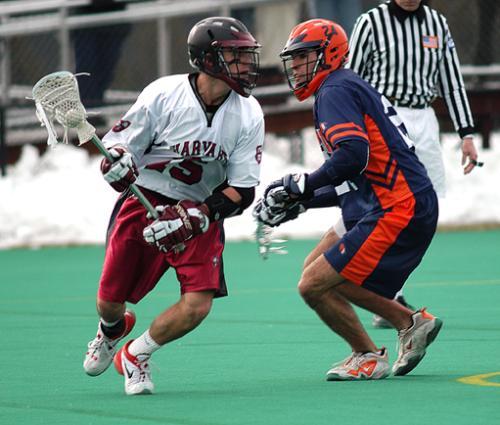 Sophomore MIKE McBRIDE (15) scored his third goal with 1:23 remaining to bring the Crimson within one, but it wasn’t enough in a 5-4 loss.
By Evan R. Johnson, Crimson Staff Writer

Even though No. 15 Dartmouth led the Harvard men’s lacrosse team by a goal, had possession of the ball and was just eight seconds away from its first Ivy League title since 1965, it still knew that the game wasn’t over.

Someone just forgot to tell the Big Green fans, who stormed the field before Dartmouth’s 5-4, Ivy title-clinching win over the Crimson (5-10, 1-5 Ivy) was official.

A Big Green player and junior midfielder Jeff Gottschall got tangled up and fell to the ground in front of the Dartmouth student section, prompting the officials to blow their whistles and drawing the attention of several players.

But many of the Dartmouth fans thought the refs were signaling the end of the game and rushed the field. The influx of people prompted a melee between the Harvard players and the Big Green fans, the latter of which bore the brunt of the beating.

“We were wearing helmets, so none of us really got hurt, but I can’t say the same for the Dartmouth fans,” tri-captain defender Andrew Crocco said. “I was talking to one of the cops after the game, and he said they hadn’t made any arrests yet. I guess they were just waiting for those drunken [expletive] to make another mistake.”

The Hanover, N.H. police said no information about the incident could be released at this time.

Following the physical extracurriculars, one Crimson and two Dartmouth players received penalties, giving Harvard one last shot to tie the game with a 5-on-4 situation. But the Big Green (11-2, 5-1) made a great defensive play, and Harvard was unable even to get a shot off.

The win put Dartmouth into a three-way tie atop the Ivy League—the first since 1969—with No. 6 Princeton and No. 9 Cornell, which also finished with 5-1 conference records. The unusual situation prompted a random selection on Saturday night to determine which team would receive the conference’s automatic bid to the NCAA tournament.

The Big Green won the draw, earning its first ever berth to the national tourney.

Dartmouth will face Syracuse (8-5) in the first round, while Princeton—which is the tournament’s fourth seed—will take on Albany in its opener. The Big Green and Tigers could face each other in the quarterfinals if both teams win their opening-round games.

But the Crimson didn’t make it easy for the Big Green to earn its shot at the bid. Harvard drew to within one with 1:23 left when sophomore attack Mike McBride completed a hat trick with a sensational goal. McBride received the feed from tri-captain midfielder Doug Logigian—Logigian’s third assist on the night—and beat Dartmouth netminder Andrew Goldstein with a speedy bounce shot.

The McBride goal ended a 3-0 Big Green run that began with 4:09 left in the third quarter. The Dartmouth streak erased a 3-2 Crimson advantage, a lead Harvard had taken with a goal from Gottschall on a man-up situation at the 1:49 mark of the second quarter.

The Gottschall score was the fourth of six in a row that resulted in a tie or lead change. The previous two Crimson goals—both McBride first-quarter tallies—brought Harvard back from a 1-0 deficit and put it up 2-1.

The nine goals represent the lowest combined score of any game either team has played this year. The previous low was ten for both squads.

Both teams’ offensive struggles were due in large part to stellar performances turned in by both goaltenders and defenses, especially Crimson junior goalie Jake McKenna, who had 13 saves on 32 shots.

“Jake showed on Friday night that he is one of the best goaltenders in the country,” McBride said.

Also contributing to Harvard’s offensive woes were the limited playing time of tri-captain attack Matt Primm—who leads the team with 28 points but only played half of the game due to a calf injury—and a lack of consistency on faceoffs. Junior midfielder Alex Vap had led the Crimson to a .632 faceoff percentage entering the game but was only able to win two of 13 against Dartmouth.

“It felt like Alex kept winning them,” McBride said. “But the ball would somehow bounce off a player’s helmet and land in a Dartmouth stick, or something like that.”

Ground balls were yet another problem for Harvard, which only won 20 to the Big Green’s 38.

Still, the Crimson players were quick to add that Dartmouth was the toughest, hardest-hitting team of the Ivy tri-champs. Cornell beat Harvard 6-5 in Ithaca, N.Y., on April 5, while Princeton took an 8-2 home win over the Crimson a week later.

“In terms of talent, Princeton was definitely the best,” Crocco said. “But in terms of playing as a team, Dartmouth and Cornell were the best.”

The loss caps a disappointing season for the Crimson, which had high hopes of challenging for the Ivy title at the beginning of the year. Instead, it finished tied for last place with Brown—the only conference opponent it defeated this year—and won just one of its final six games.

Still, Crimson players are quick to point out that the team’s veteran leadership was what kept it competitive during a difficult season.

“I think you really have to give it up to the seniors,” McBride said. “Even though we may have lost a bunch of games in a row, they always kept it positive. They were true competitors.”

–Staff writer Evan R. Johnson can be reached at erjohns@fas.harvard.edu.