Walhberg Shines in Longest Outing of the Year 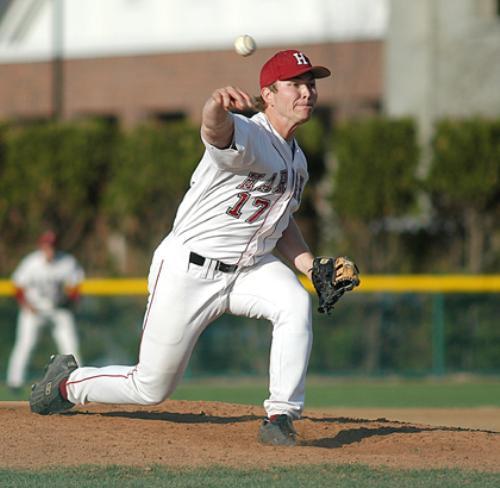 Captain BARRY WHALBERG took the mound in the fourth inning of Sunday’s game two with a one-run lead knowing that a loss would end Harvard’s season. Whalberg pitched 5.2 innings to secure the win.
By Martin S. Bell, Crimson Staff Writer

When Barry Wahlberg got up to throw early in the second game of yesterday’s doubleheader with Dartmouth, it was hardly an unusual sight. Although he normally waits for the eighth or ninth inning to storm in from the bullpen, if at all, the captain and closer often starts warming up early in games.

Yesterday, however, Wahlberg started warming up early because he was needed early. And the captain delivered.

Wahlberg contributed his longest outing on the hill in over a year for the Crimson, turning in 5.2 innings of work to close out the 14-10 win. Wahlberg had been a starter for the Crimson as late as the beginning of last year but gradually settled into the closer’s role during Harvard’s Ivy championship run.

Less effective this season, in large part due to a problematic wart on the tip of his right index finger, Wahlberg’s appearances had been largely hit or miss. He had been inconsistent to the point where Harvard coach Joe Walsh would warm up freshman Morgan Brown alongside him, in case the finger acted up and Wahlberg was unable to harness his 90 mph gas.

Yesterday, Wahlberg took the mound in the fourth in relief of senior Brendan Reed with a 7-6 lead, no action in the pen and the spotlight squarely on him.

“By the time we got to Barry, I thought we were going to get an inning, maybe two out of him because of that blister,” Walsh said. “I still don’t know, and I’m not going to ask him. Maybe we’re over it.”

Seventeen outs later, Wahlberg himself was ready to put the finger issue to bed.

“It’s no problem at all,” said Wahlberg, who surrendered the tying run on a two-out single down the right field line but was solid from that point on.

Wahlberg gave up three runs the rest of the way, more than enough after freshman Josh Klimkiewicz’s three-run homer keyed a four-run, bottom of the fourth for the Crimson.

On a day when both teams lacked real No. 4 starters for the deciding game, Wahlberg was the next best thing.

“Barry would be a starter if he wasn’t so valuable as a closer,” senior catcher Brian Lentz said. “He’s had the finger problems, and that had been a big question mark, but we hadn’t used him all weekend. Realistically, he could’ve started.”

“I just threw hard for as long as I could,” Wahlberg said. “That’s always been my strategy. I was fortunate enough that coach hung with me. I gave up a couple of runs, but luckily we had enough offense to take care of that.”

Wahlberg surrendered two runs in the seventh but killed the rally by striking out Ivy League Player of the Year candidate Scott Shirrell with a man on second to end the inning. Wahlberg pumped his fist triumphantly as he left the mound, visibly relishing the pressure just as he had down the stretch in 2002.

“It always helps to be experienced in tight games,” Wahlberg said. “If you’re in my position, you’ve got to be one of those guys who likes to be there [in pressure situations].”

We’ll never know just how high the pressure may have been otherwise. Walsh was prepared to throw freshman Lance Salsgiver into the fray had Wahlberg run out of gas. Salsgiver has been prodigious at the plate this year, and although he pitched high school ball in Michigan, he has yet to throw a pitch for the Crimson.

He had reportedly enjoyed a spectacular bullpen session during the week, but, with the Ivy title on the line, bringing him in would have been a desperate measure for a team with an exhausted bullpen.

Salsgiver warmed up during the top of the ninth but jogged back out to right field as Wahlberg returned to the mound. As the sun slowly set on O’Donnell Field and Dartmouth’s season, Wahlberg threw lightly in preparation for what turned out to be a 1-2-3 ninth, more than ready to finish the job.

—Staff writer Martin S. Bell can be reached at msbell@fas.harvard.edu.