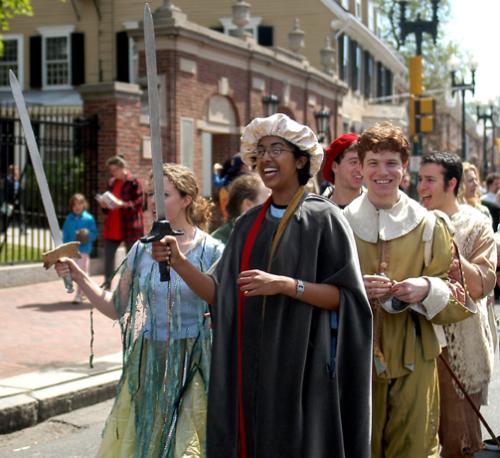 Parents held children on their shoulders, straining to get a glimpse of Manuela L.F. Zoninsein ’05 in her flowing golden gown.

The train of her dress trailed nearly 50 yards behind her—almost to Johnston Gate, where half an hour earlier she had started her slow-motion walk toward a stage set up in front of the John Harvard statue.

A crowd of students, faculty and community members settled on the newly sprouted grass to watch her last steps, which had been choreographed by Ryuji Yamaguchi ’03.

Moments before, a short parade of ballroom dancers, jugglers and men in drag had arrived after winding down Mass. Ave. and through the Yard.

As two horns accompanied her movement, pulleys lifted up her golden cloak to hide Zoninsein as she snuck out the back curtain of the stage.

With the cloak suspended in mid-air, a new pair of arms flailed against the fabric and from the golden robe emerged Master of the Arts John Lithgow ’67.

The appearance of the popular comedian—who stars on the TV show “Third Rock From the Sun”—officially opened the afternoon performance fair that highlighted Harvard’s 11th annual Arts First celebration this weekend. The festival offered four days of undergraduates’ creative and performing arts. And over four hours on Saturday, student performers served up a smorgasbord of music, dance and other entertainment at 13 locations on campus, from the parlor of Phillips Brooks House to Sanders Theatre to the courtyard of the Fogg Art Museum.

But before the performance fair could begin, Lithgow introduced University President Lawrence H. Summers, who trotted on stage in a snug red Arts First t-shirt.

“For today,” Lithgow said, Summers was “Mr. Arts at Harvard.”

After offering brief thanks to the performers and audience, Summers called for the parade to resume and march “to the food.”

The trumpets and tubas of the University Band struck up, and the parade was off again—headed toward the kickoff picnic set up under a white-and-yellow striped tent on the Science Center lawn.

In the original conception of the elaborate opening ceremony, Zoninsein would have wound her way through the Yard for eight hours. (Another version called for her to start on the other side of the river 48 hours before.) Then, a hydraulic lift on the stage would have lowered her through a trap door and hoisted Lithgow up from below.

But when he met with Arts First planners about a week ago, Yamaguchi realized he couldn’t pull it off. The stage was only 10 inches high, which didn’t leave room for the hydraulic lift, much less Lithgow. And with the parade scheduled to end a little after 11 a.m., an eight-hour walk would have had to start at three in the morning.

So Yamaguchi scaled back.

“There were a lot of problems with the piece,” he said, “but somehow I think it ended up conveying what I wanted, in a different way.”

The presentation was closer to sculpture than dance, he said. The unfurling gown referred to the paths that criss-cross the Yard and the golden color of the satin lent Zoninsein an extraterrestrial look.

Yamaguchi instructed Zoninsein to look ahead intently. The train would recall where she had been and her gaze would point to where she was going.

“You’re walking for a really long time like that, you’re bound to get really bored,” he said. “I just wanted her to keep her focus...I wanted her to imagine this infinite road behind her and in front of her.”

For her part, Zoninsein had to avoid looking at friends who yelled out in support—as she maintained an even, slow pace while others hurried by.

Although the performance fair saw sunny skies and warm temperatures, event planners had frantically checked the Accuweather forecast “every hour” in the weeks leading up to the event, said Arts First Associate Project Manager Ingrid Schorr.

The elaborate planning process involved all areas of the University—from the Harvard Board of Overseers, which funds the festivities, to the president’s office, Harvard University Dining Services, masters in most of the undergraduate Houses and six student producers.

“It is a real tribute to this community,” said Office for the Arts (OFA) Director Jack C. Megan. “Big universities can be very political institutions, but when it comes to Arts First...nobody says no.”

With more than 200 events, Megan managed to catch only 10 hours of sleep since Thursday as he raced to catch fully a quarter of the offerings.

Schorr’s job included organizing 75 volunteers and juggling the massive schedule of performers and venues. At Saturday’s picnic lunch, Lithgow sat her down and asked for help figuring out which performances to attend.

Arts First attracted more Cantabrigians than students, according to Schorr, although she said some of them had called the OFA because they were confused between Arts First and the Square’s May Fair yesterday. The two festivals came within feet of each other outside Holyoke Center, where the Arts First Outdoor Band Fest played just yards away from vendors and purveyors of ethnic cuisine.

Also among the audience were two of Summers’ three children, who flew in from Washington, D.C., for the weekend.

As Kris J. Trujillo ’05 walked through the Yard this weekend, he saw people lounging in the shade of earth-tone fabric draped over three of the blossoming trees.

Trujillo was one of four students who had spent Thursday evening tying the fabric to branches and pinning it down with stakes. He was pleased to see people relaxing in the free-form spaces they had created.

The public art installation, funded by an $800 OFA grant, has been in the works since early last month, when Trujillo and six others met around a model of Harvard Yard to plan their arrangement.

They visited several textile stores to find the right fabric. After rejecting metal screening (too stiff) and the material used to make tutus (too flimsy), they settled on a flesh-colored synthetic fabric. They liked the way the sheets caught the light, he said.

As Trujillo and his three fellow sophomores began hanging the fabric, they thought their arrangements looked too much like the tents that the University had set up for Arts First. So for the next six hours or so they reconsidered and kept on draping.

The end result was “more organic,” he said, “just the flowing of the cloth, the draping, the shading.”

“I overheard some people say, ‘When did they turn the Yard into a trash heap?’” he said. But even that response was satisfying “just because we’re creating conversation, creating something visible.”

Under the largest of the Arts First tents, students and faculty gathered on Saturday afternoon for a reception to honor Harvard Arts Medal winner Mira Nair ’79.

The filmmaker, best known for directing Monsoon Wedding last year, had flown in hours before from London, where she is filming a screen adaptation of William Makepeace Thackeray’s novel Vanity Fair, starring Reese Witherspoon.

Nair’s schedule was tight: she arrived at Logan Airport at 2 p.m., attended the afternoon reception at 5 p.m., spoke to a packed Sanders Theatre crowd at 8 p.m., met with the South Asian Society early the next morning—and then flew back to London for more filming.

Accepting the prize, Nair explained that she had decided to become a filmmaker at Harvard, after being inspired in “moth-eaten rooms in Sever” as a Visual and Environmental Studies concentrator.

“I hope Harvard got its money worth, because I had a full scholarship,” she said.

In her Sanders interview with Lithgow, she gently mocked herself and those who had worked with her.

Dressed in a traditional blue sari and blue jeans, Nair peppered her speech with anecdotes about the filming of Monsoon Wedding, whose cast, she joked, was made up of family members, “whoever was free.”

“The cornerstone of Monsoon Wedding was this actor I’ve lusted for for 17 years,” she said. “I’ve told him and I’ve told my husband, so it’s okay.”

In addition to filming Vanity Fair, which she calls an “expensive Monsoon Wedding,” Nair is working to establish programs to train filmmakers in Africa and South Asia.

The director and the comedian kept the packed Sanders crowd laughing. At one point Nair even took on an audience member whose cell phone rang: “These cell phone ejector seats are coming soon.”

At the end of the evening, when Lithgow asked if she had lived up to his glowing introduction, the audience rose to its feet in applause.

Earlier in the afternoon at the reception, where Nair had received her award, Summers laid out a strong endorsement of the arts at Harvard. He addressed what students and administrators say is their biggest gripe: a severe space crunch.

“We owe our student performers physical spaces, rooms for rehearsals and opportunities for instruction that are as good as they are,” Summers said. “And that is what we need to do.”

He joked that after he made a similarly positive statement at last year’s Arts First, the OFA’s Megan has quoted it back to him each time his office wanted funding.

“He is a remarkable entrepreneur,” Summers said. “I said it because I believed it, and so I’m glad.”

“I think he means it,” Megan said. “I don’t think he says things like that lightly.”

At the reception Summers also presented the Louis Sudler Prize for undergraduate talent in the arts to musician Hazel D. Davis ’03 and filmmaker R. Pacho Velez ’03.

Summers took a jab at Velez after presenting the award, saying, “I had rather more respect for its cinematography than its content.”

A few people in the crowd hissed in response, while others laughed.

Off To See the Seer

Around quarter to eight o’clock last night, in the hushed transept of Memorial Hall, Liza Johnson sat on a worn wooden chair playing hangman with a friend.

She had come to seek the seer.

The end of Arts First weekend also brought to a close the Harvard Seers Project, a performance art installation designed by Lee Mingwei, the OFA’s visiting artist this year. Students and community members lined up early on each of 10 nights for brief sessions with that night’s psychic. Every night, the wait list was full by 5:15 p.m. and many of the 30-odd visitors turned away came back night after night.

Johnson is from Brooklyn and her visit to friends in the Boston area coincided with the seers piece. Some people she knows had been to see astrologers, but she had never done more than read her horoscope.

The friend who introduced her to the Seers Project had heard of Lee’s work but didn’t want to participate herself. Johnson, on the other hand, was enthusiastic.

At 7:51 p.m., Lee called her name and Johnson walked into the six-walled semi-circle that cloaked the palm reader.

Last night, Lee was also keeping time, crossing names off the wait list and interrupting when each seeker’s 10 minutes were up.

“Often the seer gets lost and they go on,” he said, shaking his head. “I sometimes feel like a maitre-d’.”

Emerging after her session, Johnson said her time with the palm reader felt more like a “discussion” than an “occult experience.” She held out her right hand and for about 10 minutes they talked about her personality traits, flexibility, eccentricity and interpersonal skills.

Overall, she said, the seer was “very generous.”

“Sometimes if she would see a trait that would be a bad trait, she would offer an interpretation,” she explained, “so it’s not just bad news.”

—Claire A. Pasternack contributed to the reporting of this story.

—Staff writer A. Scott Holbrook can be reached at holbr@fas.harvard.edu.

—Staff writer Jacob H. Russell can be reached at jrussell@fas.harvard.edu.