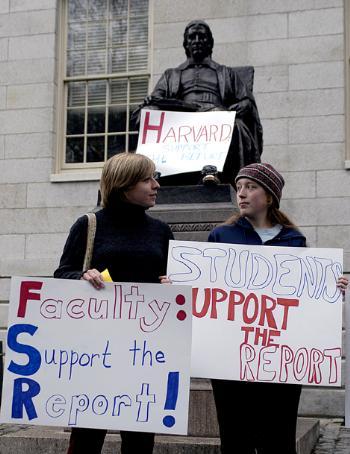 The Faculty came one step closer to approving an overhaul in the way the College handles sexual assault—from prevention to discipline—at its monthly meeting yesterday.

In a discussion of the Leaning Committee’s report, professors expressed their support for the committee’s efforts and discussed broader social issues, including gender relations and alcohol use, that they say go hand in hand with sexual assault at Harvard and college campuses nationwide.

Yesterday’s meeting was an about-face from a Faculty meeting almost exactly one year ago, when Dean of the College Harry R. Lewis ’68 pushed through a rule requiring “sufficient corroborating evidence” before the Administrative Board would investigate allegations of sexual assault.

That policy change drew student ire in the form of a large rally and outspoken criticism. It also sparked protest from Faculty members who said they did not understand the consequences or scope of the rule they were passing.

But yesterday, the atmosphere was different both inside and outside University Hall.

As Faculty members filed into the building, a group of about 75 students rallied and leafleted professors, urging them to support the recommendations released by the committee three weeks ago.

Flanked by signs such as “Fix the Ad Board’” and “Support the report,” students—many from the Coalition Against Sexual Violence (CASV)—expressed cautious confidence in the Faculty’s expected endorsement.

Undergraduate Council President Rohit Chopra ’04 praised the committee for its diversity of membership.

Chopra and several other speakers called for a new committee to be convened to review the Ad Board and inquire into alternate disciplinary options for issues of sexual assault.

Sarah B. Levit-Shore ’04, a CASV member who was on the committee, said that the implementation of the recommendations would open up forums for discussion on campus.

“Once we can stop fighting Harvard we can start fighting the real fight,” Levit-Shore said. “That’s what education is about. That’s what having the resources will do: allow us to start talking about this.”

Students at yesterday’s rally applauded the Faculty’s thus-far energetic support of the report.

Professors acknowledged a change in climate, as well.

“In a sense there had been a chasm that was unbridgeable [between students and Faculty],” said Professor of the History of Science Everett I. Mendelsohn, a committee member who said that the students’ positive reaction to the findings was heartening. “That has begun to change.”

Mendelsohn noted that the rally was about “supporting rather than challenging” the committee’s findings.

Thirteen professors spoke at yesterday’s meeting, most of them women, and voiced interest in the intricacies of student life and the administration’s treatment of victims of sexual assault.

At the meeting’s outset Professor of International Health Jennifer Leaning ’68 summarized the three major components of the report’s recommendations: a new office for centralizing resources and support, a reinvigorated and experimental approach to education about sexual assault, and a tweaking of current disciplinary procedures to make them more transparent and expedient.

After overwhelming applause, University President Lawrence H. Summers thanked the committee—as well as the student activists who brought the issue to widespread attention.

Faculty immediately voiced their opinions, mostly supportive, of these various recommendations, citing the thoroughness of the committee’s year-long investigation and the pervasiveness of sexual assault as reasons to endorse the report.

“The committee’s emphasis on preventative education underlines that this issue is everyone’s responsibility,” said Dean of the Radcliffe Institute for Advanced Study Drew Gilpin Faust, noting that the end of Radcliffe as a women’s institution meant that “the lives of women undergraduates are now fully the responsibility of the College.”

Other professors said that the report’s recommendation to use a Single Fact Finder (SFF) in cases brought before the Ad Board was a small way of changing undergraduates’ perception of the disciplinary body.

“[The SFF] will ensure that every complaint will be fully investigated,” said committee member Katharine Park, professor of the history of science and chair of the Committee on Women’s Studies.

But it was the issue of Harvard’s culture and social climate that spurred the most discussion from the speakers, who went beyond the scope of the report to express concern about alcohol, social space and personal relations between students.

Many professors concurred with Kleinman’s view on alcohol, and several suggested a separate inquiry into the use of alcohol on campus.

“Significant progress will require a significant investigation of how we address issues of alcohol among our undergraduates,” said Pamela K. Keel, assistant professor of psychology, who drew attention to the Leaning Committee finding that an overwhelming percent of sexual assault cases involved alcohol.

Summers cited these statistics at the end of the meeting, saying, “It would be at our peril if we did not seriously discuss the role of alcohol on our campus.”

“While I am enormously impressed by the utility of any observations put forth here, it is a mistake to fail to recognize that in this is an issue of culture and general attitude,” Summers said. “This is a reflection of the beliefs we have as a community.”

Dean of Undergraduate Education Benedict H. Gross ’71, who in recent weeks has stated his commitment to evaluating student alcohol use at Harvard, said after the meeting that the Faculty’s response to the committee had illustrated the importance of this issue.

“The related issue of alcohol will have to be considered as a community, not by any one person,” Gross said. “No educational program or committee will be effective unless we as a community take a good look at itself and its values.”

But on a day when sentiments were nearly unanimous, there were moments of dissent.

The self-described “sole critic of the report” Kenan Professor of Government Harvey C. Mansfield ’53 questioned the thoroughness of the report in dealing with what he said were innate gender differences and called the discussion “vacuous.”

After Mansfield asked the Faculty to consider the role of casual “hookups” as defining sexual behavior on campus, Summers cut in to emphasize the importance of consent in the definition of sexual assault.

The Faculty is expected to further discuss the report and vote on its recommendations at its last open meeting of the academic year, to be held on May 20.

—Staff writer Sarah M. Seltzer can be reached at sseltzer@fas.harvard.edu.