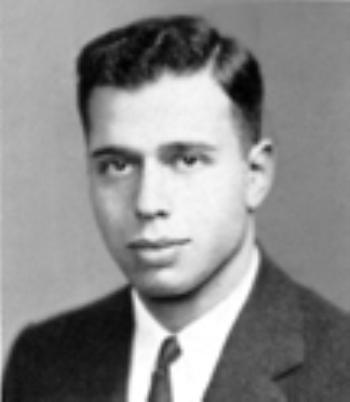 Fred Caploe ’53 is a man with strong beliefs in social justice and peace. As an attorney for a condemned death row inmate, a former civil rights lawyer, and a veteran of both the Navy and the Peace Corps, Caploe has spent nearly five decades working for what he believes in.

“I grew up under the Eleanor Roosevelt kind of philosophy,” Caploe says. “If you’ve got more than the other guy, then you share.”

That philosophy has helped keep Keith E. Adcox out of the gas chamber for 20 years.

In 1983, Adcox was sentenced to death for the murder of a California fisherman.

That same year, California Governor George Deukmejian abolished a state program that provided legal services to convicted criminals—a change made over the objections of the state bar.

According to Caploe, the state public defender’s office handled almost all capital cases, but those on death row were not getting representation in the appeals process.

The result was “very predictable,” Caploe says. “There was a big need for lawyers to take on these capital cases.”

A group of lawyers set up a program to allow private attorneys to represent capital defendants who would otherwise be unrepresented, and Caploe signed on.

From 1984 until the present, Caploe has defended Adcox in post-conviction habeas corpus proceedings, successfully putting off the execution.

He describes this ongoing work as “helping to prevent misguided public officials and their like-minded constituents from perpetrating an involuntary, state-sponsored death.”

As a student, Caploe was more interested in his studies than activism, he remembers. It was during his time in the Navy, following graduation, that he developed his liberal views about the world.

A native of Dorchester, Mass., Caploe attended Boston Latin High School and Brookline High School before arriving at Harvard, where he concentrated in fine arts and minored in social relations.

But after nearly two decades in Massachusetts, Caploe says he was eager to get out and see the world. The Navy was a great way to travel around the globe on the government’s dollar, Caploe says, so after graduation he joined up and served from April 1953 to August 1956.

Caploe enjoyed meeting Navy men from many walks of life and seeing different areas of the world, but he says that three and a half years in a military institution was “not really my cup of tea.”

“I learned as time went by how unfair and hypocritical the world was, and I began to always raise lots of questions and participate in the activities I thought could in some small ways help,” Caploe says.

“I always felt, too, that the U.S. has owed many apologies to many, many, many people in terms of slavery, and Indian genocide and arrogant control of other countries in the supposed name of democracy,” he says. “The U.S. needs to come out and eat humble pie and not only make broad apologies for all these wrongs, and make specific compensation...but to understand the negative impact of what this country has done.”

With the G.I. Bill and a renewed commitment to social justice, Caploe finished up his service in the Navy and headed to Stanford Law School.

A strong opponent of racial discrimination, Caploe was involved in activist efforts during the Civil Rights movement, marching with his first wife in various protests from the late 1950s through the 1970s.

In 1964, Caploe answered the call of President John F. Kennedy ’40 for lawyers to head South to do civil rights work as part of the group Lawyers for Civil Rights Under Law.

Caploe went to Mississippi, where he worked for civil rights causes with other lawyers from northern states.

Today, Caploe works in private practice in Richmond, Calif. and has been active in encouraging lawyers to do pro-bono work, serving as a board member of a local Bay Area-wide legal services organization.

Caploe says of his family life, “I feel I’ve been extremely lucky.”

Caploe married Marguerite Esta Higgins in June 1956. He describes his first wife as “a very decent, strong, and good person, and very loving”.

The couple joined the Peace Corps together and served for three years in Bolivia, from 1968 to 1971.

“She and I were very much attuned to this idea of keeping on the ‘up side’ all the time and working hard at the things you believed in,” says Caploe.

Caploe married Maribé Jacard in April 1976. When they married, she had a daughter who at that time was five years old and who is now expecting twins.

—Staff writer Stephanie M. Skier can be reached at skier@fas.harvard.edu.