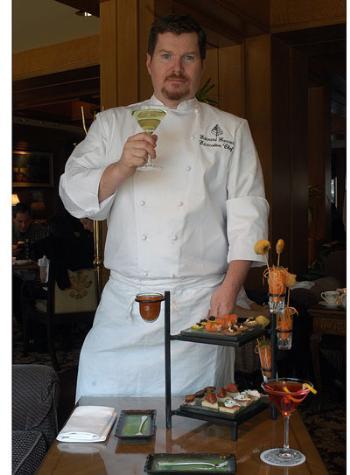 The Height of Elegance

Hordes of hungry parents and their graduated progeny descend on Square restaurants this week. This much we know. If you
By Mollie H. Chen

Hordes of hungry parents and their graduated progeny descend on Square restaurants this week. This much we know. If you are keen to avoid the hundreds of other newly crowned Harvard grads enjoying lunch out courtesy of their parents’ Amex, but still want to enjoy a good old fashioned bite at your folks’ expense—sans the crowds—the Four Seasons in Boston may have just the thing to celebrate those two new letters after your name. In the finest tradition of the genteel English high tea, the haute cuisine gurus at Boston’s five-star hotel have combined trendy Japanese fare with the more traditional scones and strawberries to make for a simply blissful, make-like-a-millionare afternoon extravaganza dubbed the “Power Tea.” Plus, it’s a hundred times more original than the standard Upstairs on the Square upmarket Harvard Square outing.

We pulled up behind a gleaming black Mercedes with consular plates. The valet attendant peered through the driver’s window with a pleasant, yet quizzical look on his face. “Are you guests?” he asked. Brandishing her Crimson press pass, FM Associate Editor Amelia E. Lester ’05 explained that we were, indeed, serious journalists out to review the Four Seasons legendary high tea. He nodded his head respectfully and ushered us through the gilt-edged doors into the lobby.

But despite the pretense of the press pass, hard-hitting investigative journalists we ain’t. The hardest part about this assignment was costume choice. The dress code was casual elegance, which conjured visions of a languid Gwyneth Paltrow on mini-break in Martha’s Vineyard. Our collective penchant for polo shirts aside, we were a decidedly un-WASPy duo. A strident atheist from the colonies and a half-Asian from the land of café au lait do not a country club maketh, as the saying goes. Consequently, many anguished e-mails ensued in our attempt to interpret the Four Seasons vaguely aristocratic dress code. Luckily, FM photographer Andrew M. Sadowski ’04-’05, sole harbinger of refined New England sensibilities, was willing to preach the gospel of Lily Pulitzer and Brooks Brothers to our otherwise uncouth selves.

And so, appropriately dressed in decorous attire—matching handbags and shoes, bien sûr—we entered the sanctity of the Bristol Lounge feeling as though we belonged. The Bristol Lounge is one of those rare gems that seems to transport you back to an age where ladies really did lunch, gentlemen smoked cigars and cucumber sandwiches were the snack-food of choice. Beacon Hill grandmothers luxuriated on overstuffed armchairs while their tow-headed grandchildren bounced up and down on equally comfortable, homey sofas. Near the elegant bar that lined one side of the room, harassed businesspeople took time out from negotiations to enjoy a pre-dinner drink.

While the setting inside the room was pure Britannia, the view through gloriously oversized windows of the Common was quintessential ye olde world Boston. The temporal/spatial confusions only continued: once languidly positioned on a brocade chaise lounge like characters out of E.M. Forster, we were presented not with the expected cup of tea, but rather with chic green apple martinis and minimalist Japanese delicacies served on a South African styled wrought iron centerpiece.

This was no traditional High Tea, but rather the new Power Tea, an exclusive offering of the Four Seasons Boston Hotel. Launched in April, the Power Tea is designed as a funky, more modern version of the traditional Afternoon Tea. The standard tea is nothing to scoff at, however, garnering much-deserved accolades from Zagat Survey 2002, among others. The Power Tea substitutes martinis for Earl Grey and shrimp tempura for scones. Other haute cuisine delights included foie gras, steak tartare and deviled quail eggs. Executive Chef Edward Gannon explains that he wanted to do something different when he designed the tea.

Sipping our martinis and trying to appear effortlessly graceful, we couldn’t help but notice the envious glances that our tea was eliciting from our well-heeled fellow patrons. With the wait staff bustling around our table, positioning the impressive display just so, and setting our places with beautiful Asian-inspired dishes, we attracted quite a bit of attention. The flamboyance of the tea, however, only served to heighten our sense of conscious decadence as we devoured the sinfully rich treats. While all delicious, our personal favorites were the caviar creations. Followed by a sip of our perfectly mixed drinks, the salty fish eggs were the ultimate delicacy.

As the wait staff briskly cleared our plates, we felt as though we couldn’t possibly consume anything else. However, as soon as the traditional Afternoon Tea was deposited on our table, we were won over by the tasteful assortment of scones, breads, sandwiches and desserts. When pressed, we chose from the extensive list of tea choices, which included standards such as Earl Grey and Orange Pekoe as well as more unusual ones such as the “Children’s Tea.” Within moments, our drinks were served in their own individual pots, along with sticks of rock sugar, honey and milk. The accompanying snacks arrived on a three-tiered serving platter. Sipping our fragrant blends and nibbling on white chocolate cherry scone spread with delicious clotted cream, we could almost detect the slightest English lilt in our normal (American and Australian, respectively) speech patterns. The sandwiches were high-class variations on the traditional cucumber and watercress variety, and included carrot mousse on zucchini bread with curry butter, shrimp salad on scallion bread with chipotle-lime butter and sesame chicken on whole grain bread with watercress butter. The tea bread and scones were served with clotted cream as well as strawberry jam and tasty lemon curd. Though we were already outrageously full with amazing food and drink, we found room for the succulent desserts. The rich chocolate apricot ganache tartlett melted in our mouths and made for the perfect ending to a perfect afternoon.

As the last traces of our tea were removed from the table, we gazed through the window and watched students, businesspeople and families rush past in the early evening twilight. Inside the Four Seasons, however, there was none of the late afternoon frenzy. Perfectly satisfied, and full of indulgence in every sense, we left the Bristol Lounge infinitely calmer and more relaxed than when we had entered. Though at $95 (said to serve 3-4, but more like 2-3), the Power Tea may be a pretty hefty investment, it is the perfect treat for when the parents or grandparents are in town. The Afternoon Tea, at $22 a person, is slightly more affordable and more than worth the expense. It seemed appropriate that J.Lo came blasting through the radio as soon as we began to drive away from the opulence of the Four Seasons and back toward our more provincial lives. As she sang her catchy chorus, we glanced at each other with perfect understanding. Martinis and caviar aside, we’re still Jenny(s) from the Block. Cheerio!