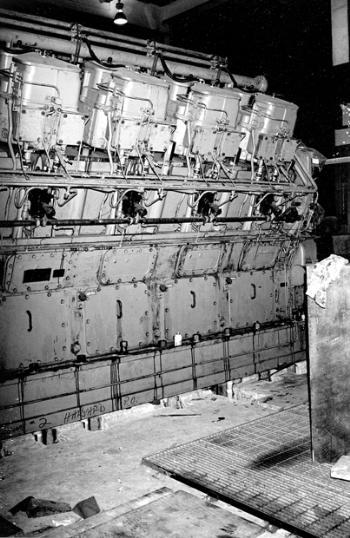 The diesel engines which fuel MATEP's power-generating capability caused resident concern over pollution from their exhaust.
By Claire A. Pasternack, Crimson Staff Writer

At the beginning of 1978, Harvard found itself locked in a battle with area residents and government officials over its most expensive and ambitious construction project ever—the Medical Area Total Energy Plant (MATEP).That year, the Massachusetts Department of Environmental Quality Engineering (DEQE) turned down the University’s request to build the plant.

The denial was just one in a series of obstacles the project would overcome on its way to being completed in 1986. And with a final price tag of $350 million and hours lost in community squabbles, MATEP turned out to cost more than the University bargained for—in both dollars and goodwill.

As Harvard’s schools and teaching hospitals in Boston grew, it became apparent that the antiquated Harvard Powerhouse, a plant built in 1906, would not continue to provide enough power for the area at feasible cost levels.

Harvard planned MATEP in order to address these concerns, with an eye towards efficiency and growth. With the mid-1970s oil-crisis and pressing demands to secure lasting sources of energy at low costs, ‘total-energy’ was the goal.

Situated on the corner of Brookline Avenue and Francis Street in Boston, MATEP is one of the largest power plants in North America. It includes six 9,000-horsepower diesel engines, two turbine generators, three boilers, seven chillers and seven cooling towers. The plant can produce enough energy to light suburban Wellesley—population 28,000.

The total energy component of MATEP came from its cutting-edge “co-generation” technology, whereby the exhaust from the production of each one of the plant’s three products—chilled water, steam and electricity—would fuel the generation of another product.

Harvard planned to spend $40 million, a cost that would be quickly covered by the $2 million a year that the University was projected to save by producing power in-house at a central location.

But with a final price tag of $350 million and hours lost in battles with local residents and government environmental agencies, ‘total-energy’ soon morphed into total disaster.

“It seemed like a colossal blunder at the time,” says Sherwood E. Bain ’45, who has analyzed and written about Harvard’s finances for years as a Boston investment banker.

By 1976, Harvard had set out to construct MATEP, ordering the six diesel engines necessary to run the plant, storing them in a South Boston warehouse and launching construction on the 315 ft. smokestack.

MATEP’s planners had not anticipated that its Boston and Brookline neighbors would voice such vehement opposition to the project. The residents were chiefly concerned that the project was environmentally harmful.

NOMATEP, a group created to oppose the project that claimed to represent over 100 community organizations, argued that the nitrous oxides emitted by diesel engines would eventually cause lung cancer in those who lived in the area.

By 1977 Harvard entered hearings with the state DEQE, and in 1978 the University received a ruling that the plant would be too environmentally harmful to be built. In the summer of 1980, the case came up for reconsideration, with protesters remaining adamantly opposed to the plant’s construction.

When the DEQE called a meeting at the State House with Harvard’s lawyers to schedule a hearing so the case could be reconsidered, about 15 Brookline and Boston residents barricaded the meeting room doors in protest. After capitol police were summoned and the meeting cancelled, it was held by telephone with Harvard threatening to take the governmental agency to court if its permit was denied.

After 186 hours of oral testimony that led to 7,300 pages of transcript documents, the DEQE approved MATEP’s construction in November 1980, provided that Harvard follow 32 operating conditions, including the creation of stations to monitor the plant’s emissions.

But the DEQE was only one in a series of hurdles the project had to clear. MATEP’s planners insisted that the plant be exempt from the Environmental Protection Agency (EPA) pollution regulations because of Harvard’s non-profit status. In December 1980, Bok wrote to then-Massachusetts Gov. Edward J. King seeking exemption from the act, which was granted on a probationary basis.

Community activists, seeing a ruling they thought they could overthrow, quickly pounced on the decision, arguing that Harvard was using its non-profit status to sidestep environmental regulations for a for-profit project. But the Second Circuit U.S. Court of Appeals upheld the exemption in December 1981.

Meanwhile, Harvard had begun to move the diesel engines into their ultimate location, where local resident protesters stood with black balloons in hand—several were arrested.

But while the plant began to provide chilled water and steam in 1981, the engines—whose purpose was to produce electricity—could not yet be turned on, pending a final ruling from the Supreme Judicial Court (SJC) on the DEQE decision, which had been appealed once again by local activists. Because the plant was only partially operational, its co-generation cost savings remained unrealized as MATEP’s price tag swelled to $230 million.

Finally, after several more hearings considering the potential health costs of the plant—4 people might die of lung cancer over 40 years, they concluded—the SJC ruled to let the plant operate, and the diesels were fired up, despite residents’ claims that Harvard was as “sick...[as] Nazi Germany.”

After 12 years, MATEP was finally operational, but at price of about $350 million—a whopping $310 million, or 775 percent, over budget.

Little more than a decade later, officials decided to rid themselves of the problem plant.

In 1995, members of the Faculty complained that MATEP had drawn too many funds away from academic pursuits, depriving the College of its resources. And administrators questioned whether the University should be in the power-plant business at all.

“Whatever our capacities are as a University, they do not really extend to great sophistication to running energy plants,” said then-University President Neil L. Rudenstine in 1998.

That year, Harvard sold its white elephant to Commonwealth Energy System for $147 million, roughly one-fourth of the plant’s construction costs, adjusting for inflation.

During the 1970s and 1980s, as the MATEP saga wore on, the project faced mounting opposition from insiders and outsiders alike. Both University administrators and professors indicated their frustration vocally, especially as the price tag seemed to grow uncontrollably.

Former Vice President for Government, Community and Public Affairs Charles U. Daly says MATEP was the not worth the money and legal battles it cost Harvard.

“The costs and the effort weren’t the best course Harvard could have taken,” he says. “It probably shouldn’t have been undertaken.”

But Bain says MATEP’s costs seemed larger in the 1970s and haven’t adversely affected the University.

He says that in comparison to the endowment of only one or two billion dollars that the University boasted in the 1970s and early 1980s, $350 million “felt relatively large.”

“Harvard moves on and accumulates more money, and despite the criticism that it gets, it maintains a fiscal integrity,” he says.

Former Vice President for Financial Affairs from 1971-1977 Hale Champion also maintains that MATEP was, in the end, a good move for Harvard.

“The old plant was running down—it had to be replaced,” he says.

Champion adds that alternatives under consideration, such as nuclear energy, would have been even more expensive. “[MATEP] was probably less expensive than anything else we might have done,” he says.

He says the internal outcry against MATEP’s cost at the time was unfounded.

“Some members of the Faculty thought that they could have received in pay the money that went into the building—that wasn’t true,” he says. “Harvard was never in any financial trouble because of this.”

Champion says he regrets the time it took to approve the plant and points to poor project management and government indecision as major factors in MATEP’s demise.

He says the University’s administration initially hired a firm to design and construct the plant and another group to oversee the job—a watchdog for the project.

“You need to have somebody with the incentive to keep the costs down,” he says.

But when Champion left Cambridge to join the Carter administration, he says the watchdog firm was fired.

“That was a fatal, very costly mistake. The result was that the cost went way up,” he says.

But Champion says it was the government—both the state and federal environmental agencies—that cost Harvard the most. He says a Harvard team from the School of Public Health investigated the health and environmental risks of the project before it was begun, and that the government devoted years of research only to conclude exactly what Harvard had discovered at the outset—that the plant was safe.

Specifically, Champion says the government upped MATEP’s price tag by changing its mind on the project’s fate so many times.

“They never said no, but they never said yes, so it went on and on,” Champion says. “ I blame the government for being responsible for a lot of the costs,”

He says the proof is in the pudding.

“The project was ultimately successful,” he says. “There was no environmental damage or problem. The only big problem we had was that the hold-up made it cost more money for Harvard than it should have.”

But nearly 30 years after MATEP’s inception, Boston and Brookline residents still paint a different, much less rosy picture than Champion.

Brookline lawyer Daniel G. Partan, who chaired a town committee to investigate the health and environmental risks of MATEP in the 1970s, says Harvard used its clout to turn the tables in the University’s favor.

He says because Harvard began construction of MATEP and bought the diesel generators before it had been granted governmental permission, it made it “politically impossible to deny the plant its permit.”

“They used their economic and political muscle to push the project through by beginning to construct the plant without a permit and by putting up a stack, which was enormously expensive,” Partan says. “They also purchased the diesel generators before they were licensed to construct and operate the plant. What this did for them was ensure that this plant would be built.”

He says the situation suffered from a lack of equity between the two sides.

“If there had been a level playing field, if the community had the kind of political and economic power that Harvard had, I think the rational decision would have been to deny the project,” he says.

He says that because MATEP took so long to be turned on, Harvard “wound up being stuck with really antiquated equipment” that was not environmentally friendly.

“It’s become quite clear that the kind of technology that was used in the facility is not a benign technology,” he says. “The University went ahead and purchased diesel generators that run on residual fuel, which is the least expensive and, incidentally, the most dirty fuel.”

Partan says he thinks that because the University was so determined to build MATEP, it closed the door to communication with local neighborhoods at the very beginning.

“Once they went down that road and spent a considerable sum in pushing the plant forward, there would have been no way to bridge the gap between the community and the University,” he says.

Daly compares MATEP’s conflict with local residents to the University’s current dealings with the Allston neighborhood into which it plans to expand.

Nearly a year ago, Harvard ventured again into the utilities business, purchasing a one-time electricity-producing plant owned by NSTAR on the corner of Memorial Drive and Western Avenue.

But Vice President for Facilities and Environmental Services Thomas E. Vautin says Harvard learned its lesson from MATEP and will not seek to control the plant. The University has hired an independent contractor to operate it instead.