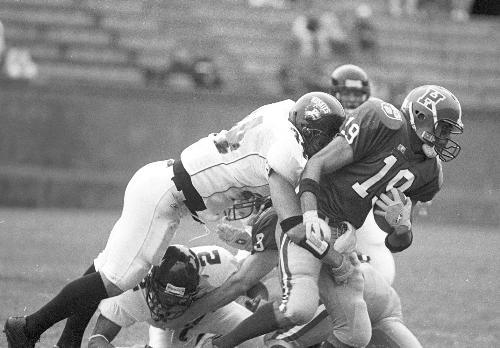 It was The Game in a way Harvard-Yale hadn’t been for some time.

With Harvard and Penn both undefeated in the league for the second consecutive season, the Ivy title was on the line at Franklin Field. And somehow, in some way, the battle had become bigger than the Ivy League, reminiscent of an era when Ivy schools figured into national rankings not published by U.S. News and World Report.

The media glare was unprecedented in the modern era, and the hype and hope merged into a singular motivation for the Crimson as it tried to extend its 12-game Ivy winning streak. But instead of a win, Harvard was handed its worst defeat in more than seven years.

“Stating the obvious, Penn dominated us today,” Harvard coach Tim Murphy said after the game. “It was a combination of how well they played and how poorly we played. They were as good as advertised.”

A week later—after Harvard capitalized on a phenomenal fill-in performance by Fitzpatrick to beat Yale, 20-13—the Crimson had a 6-1 Ivy record and the Quakers had the Ivy title.

“We set out to win the championship,” Morris said. “We came up a little short, but we ended on a high note. We beat Yale.”

At the opening of the 2002 season, the Harvard football team was faced with one of the harder tasks in life—improving upon perfection. After posting a 9-0 record in 2001—its best mark since 1913—the quest was a 10-0 season.

But after two early, heartbreaking losses to Northeastern and Lehigh, it was clear the team wouldn’t be able to match its win total from the year before. So instead, it surpassed the previous season in other areas, mainly media attention.

Morris was featured by Sports Illustrated, which said of the NFL prospect, “At times it seems Morris simply can’t be stopped by Ivy defenses.”

And then, of course, there was Lee Corso and “GameDay.”

“Our league has been legitimized as a quality football league,” Murphy said after “GameDay” announced its trip to Philadelphia. “I say, embrace it. All we can do is reap positive benefits from this thing, so enjoy it.”

And the Crimson had on-field success to embrace as well.

Harvard’s two nonleague losses came to top-25, scholarship teams by a combined four points. And for the most part, the Crimson was able to will itself to victories, despite a plethora of newcomers, rotating quarterbacks and an oft-injured captain.

The mainstay, of course, was Morris, who became only the third player in league history to win the Bushnell Cup as the Ivy’s Player of the Year twice. Morris broke his own single-season records for receptions (90) and yards (1,288) and holds virtually every single-game, single-season and career Crimson receiving record.

His efforts were also rewarded with first-team All-American recognition from the Associated Press.

“It obviously means a lot to me. It’s a huge award,” Morris said. “But every personal honor reflects the team’s accomplishments and how well the offense was able to perform.”

Morris posted his monster season despite dealing with two quarterbacks.

Rose, the Crimson’s most prolific passer ever, was the steadying force of the 2001 perfect season, and began 2002 with the same ruthless efficiency. Through three games, the fifth-year senior had as many incomplete passes (three) as touchdowns.

But a nagging back injury kept knocking Rose out of games, and superb play from his sophomore backup helped keep him out. By an Oct. 26 contest with Princeton, Fitzpatrick got the nod in front of a healthy Rose, but lost the job when Rose relieved him and led the Crimson to victory.

However in the season finale against Yale, it was Rose who needed relief and Fitzpatrick who propelled Harvard. Although neither emerged as the clear leader, both were critical to the Crimson’s success—Rose usually with his arm, Fitzpatrick with his feet.

“It doesn’t really matter [who is playing quarterback],” said sophomore wide receiver Rodney Byrnes, who emerged as a legitimate threat this season. “When Fitzy’s in, he’s going to run the ball a little more, but they can both put the ball where it needs to be.”

Captain-to-be linebacker Dante Balestracci was named to the All-Ivy first team for the third consecutive season.

—Staff writer Lande A. Spottswood can be reached at spottsw