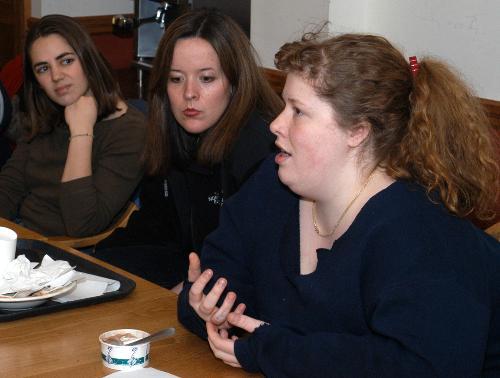 In February, Amy E. Keel ’04 destroyed a nine-foot tall snow penis in Harvard Yard, an act which vaulted her into national newspapers and dining hall debates.

And in March, she played a part in the temporary shut-down of the Eliot House open e-mail list after someone made a post to the list using the word “slut,” which she calls a “sexist, derogatory term.”

A board member of the Coalition Against Sexual Violence (CASV), Keel has made her name this year routing out what she considers sexist language and symbols.

Keel says that the snow phallus, constructed by the men’s crew team, was a structure “put up to assert male dominance.”

She enlisted the help of her roommate, Mary C. Cardinale ’03, to knock it down hours after it was built.

In a letter written to The Crimson, Keel explained her motives.

“No one,” she wrote, “should have to be subjected to an erect penis without his or her express permission or consent.”

She added, “It was perfectly within my rights to take down this object.”

The next month, Keel played a role in the temporary shutdown of the Eliot House open e-mail list.

Someone posted an e-mail in which an unnamed person was described as having been sexually involved with “47 percent” of the football team.

Another person responded by calling this hypothetical person a “slut.”

Keel says that she responded by saying that the use of the word “slut” was inappropriate.

“I wrote back that ‘slut’ is a sexist, derogatory term,” Keel says. When she threatened to talk to House administrators about what she termed harassment on the list, the chairs of the House Committee temporarily took the list offline.

Keel defends her position on the word “slut,” drawing a parallel between sexist terms and racist terms.

“To use epithets that have no value but are meant to put people down…is not appropriate,” says Keel. “It’s much more acceptable to be sexist than racist.”

A month after the Eliot House list incident, Keel celebrated a victory with her fellow CASV members.

In April, a Harvard committee charged with examining Harvard’s sexual assault policy recommended the creation of an Office of Sexual Assault and Response at the College.

Keel says that this decision was a positive step in the way in which Harvard deals with sexual aassault.

“It was a major investment on Harvard’s part,” she says. “We’re really excited about it.”

However, Keel says that the decision to create the new office was a compromise.

“It was probably a diversionary tactic but also a positive step,” she says. “We’d been asking for a long time for centralized resources [to deal with sexual assault].”

Keel says she is aware that her outspoken views and her reputation as a feminist precede her.

“That’s something people know about me, even before they meet me, and they make a lot of assumptions that aren’t true.”