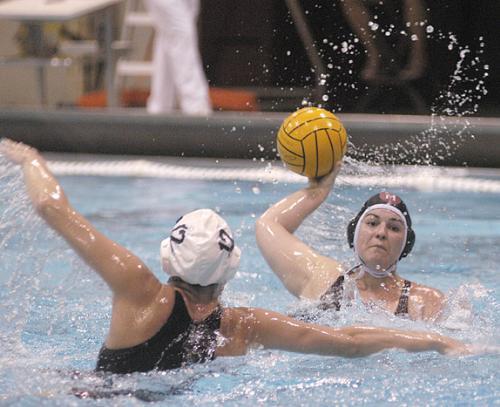 Despite fine performances in late-season tournaments, the Harvard women’s water polo team still couldn’t catch Brown in any its five meetings, and the Bears eliminated the Crimson from Northerns.
By Timothy J. Mcginn, Crimson Staff Writer

With only two seniors to show the way, the Harvard women’s water polo team opened the season with a woeful five-game losing streak that would have demoralized lesser squads.

But the Crimson endured, maturing as a group and turning in its finest performances in the most important competitions—during tournament season—to provide a window into what could be a bright future just a year or two away.

The past two seasons have been rebuilding efforts for Harvard, marked by an infusion of youth into the program.

Twelve of this year’s swimmers were either freshmen or sophomores.

Sophomore sisters Tina and Teresa Codini continued their quick rise to prominence, forming the backbone of the Crimson offensive formation.

Teresa Codini tallied the most goals on the squad and was consequently tapped as first team All-ECAC and second-team for the Northern Division and Eastern Championships.

“I think I’m beginning to learn how to adjust when a team plays off our offensive strengths,” Teresa Codini said.

While much of the squad’s talent is concentrated in the younger two classes, that raw ability has yet to be honed and channeled successfully to produce consistent results.

Complicating matters further, Harvard began its season later than most other teams, which meant it needed more time to jell and lacked the chemistry of other squads.

With the swimmers not quite sure of the movements of their teammates and not yet able to assume they were all operating on the same wavelength, mental lapses on defense left the goal consistently vulnerable.

That weakness was exploited time after time on counterattacks.

With less physical training than schools with earlier starts, the Crimson was slow in the water and all too often wound up taking second in the race towards the goal.

It was a problem the team would grapple with all season long. As the year progressed, however, the defense improved and the problem became less pronounced.

But when it reared its ugly head Harvard didn’t stand a chance.

As a result, the Crimson was streaky, never stringing together more than two consecutive wins but falling victim to losing skids of three games or more on two separate occasions.

The team united at the end, however, defeating the opponents it was supposed to and just barely falling to those it wasn’t.

In tournament season, the Crimson beat up on Queens and Connecticut College and avenged an early-season loss to Bucknell.

But the one loss Harvard could never rectify was its defeat to Brown. Not one of the five.

The Bears defeated the Crimson by at least three goals on five occasions.

But the worst drubbing came in the last match up of the season, in which Brown defeated Harvard by 11 to eliminate the Crimson from Northern Division competition.

“It’s really frustrating because they’ve been our rivals ever since I’ve been on the team,” co-captain Michele Falkner said. “We have beaten them in the past, and we’ve come so close this season. We know that we have the skills and the talent to beat them.”