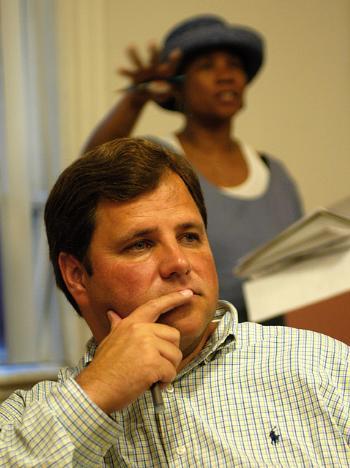 The police had few answers for Cambridge resident Bambie Hoose, who said she feared allowing her children out of the house, or for Riverside Neighborhood Association President Lawrence J. Adkins, who said the city desperately needs a more active, visible police presence.

“We need two men, either side [of the neighborhood], looking at each other, making reports constantly,” said Adkins, who like other community members expressed worry that police officers are too often in cars zipping through the neighborhood, rather than patrolling it on foot. “We need to have an understanding where you can see a person in blue walking your neighborhood.”

Residents also said they felt there was a lack of police response when they did voice concerns.

One woman said she had heard gunshots outside her house one morning—but though she made a frightened phone call to the police station, no officer appeared on the scene. Hoose, whose daughter testified in court a year ago against a group of youths accused of stabbing a friend, said windows in her house had been shattered by bricks and she had been threatened while walking in the city.

“Every time I call the police, I don’t feel like I’m getting any help,” Hoose said. “What I’m getting is the run-around.”

The frustration and fear of residents like her can spiral, said Cambridge City Councillor E. Denise Simmons.

“People like Bambie will cease to report,” Simmons said.

“Neighbors should not be frightened and yet they are frightened,” said State Rep. Alice K. Wolf, D–Cambridge. “Sometimes they’re even afraid to call the police because they fear retaliation.”

But Cambridge Police Department Superintendent David Degou said communication is essential to effective policing of the city, as is collaboration between residents and police.

“I think it’s unfortunate that many times it takes a major crisis to bring everyone out here,” Degou said.

For the past decade, Cambridge has had a community policing initiative in place, which calls for frequent, consistent contact between city residents and the police in order to let the latter know what areas need additional attention.

Though Degou said the Riverside community is generally a communicative one, he said participation had been lacking in the city as a whole—resulting in a dearth of helpful information in deciding how to allocate police.

“I’ve been to meetings where there have been one or two people,” said Degou in a later interview. However, “[Riverside] is a very active community group and we appreciate them being active. It’s an area we’ve been concerned about for years and years and years.”

Sullivan said another possible reason for the lack of police visibility is the smaller size of today’s force.

Degou agreed that the decline had caused problems for the police, especially when retirements come in large numbers.

“Last December, 12 police officers left and that caught us a little bit off guard,” he said. “They weren’t expected to leave, but they were given the opportunity to leave and they did.”

At the meeting, a group of residents decided they would write to the city council to ask for more police presence in their neighborhood and to get the police out of their cars and onto the streets.

But Degou said there is considerable police presence already in the area and that officers on foot might not be the best way to police the area.

“The eliminating of all the police vehicles, I don’t know if that’s practical,” he said. “We need a combination of foot patrol and motor vehicle patrol. I’m not sure it’s the most efficient manner to have everyone in the city on foot.”

But both sides said they were heartened by the discussion.

While the police would not discuss specific plans for providing the presence and visibility that the residents want, Degou said communication was the way to begin and that the department would talk over ways to help the community.

“We always discuss ways to improve our police department,” he said. “As soon as the commissioner comes back [from vacation] we’ll sit down and we’ll discuss a strategy and how we can best implement it.”

Adkins expressed cautious optimism that Tuesday’s meeting would improve relations between police and the community.

“It’s going to be an ongoing thing to bridge this gap between the police department and the rest of us to see what are the appropriate actions of a police department in a small city of only seven square miles,” he said.