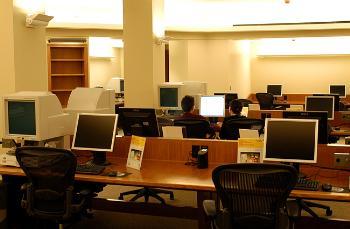 In addition to about 165,000 reels of film, Widener’s new reading room includes “13 state-of-the-art reading scanners” with which patrons can view the archives, print them or burn them to CDs, said Marilyn D. Wood, Widener’s head of access services.

Wood said the move first occurred to library administrators several years ago while planning Widener’s current large-scale renovations. The space which the reading room occupies was desirable for a number of reasons, they said.

“Since it doesn’t have any windows or outside light, we realized it would be ideal for a microform collection,” said Nancy M. Cline, the Larsen librarian of Harvard College.

“It’s difficult for people when things are in different formats because it gets frustrating,” said Jean Lenville, Widener’s head of serials services. “This hopefully will make things a little less frustrating. Even though it’s in a different format, it’s just around the corner.”

Lenville said she thought the new venue would bring valuable resources out of the shadows.

“It’s information from the times that you can’t get any other way, so historically it’s pretty important,” she said.

Cline said the new space in Widener came none too soon for Lamont’s overflowing shelves.

“Certainly the government documents and the microform collections are used by undergraduates, but we had reached a point where the collection there was really out of space,” she said.

The microfilm’s place will not remain empty for long, said Professor of History Ann M. Blair, who is a member of the Faculty of Arts and Sciences’ standing committee on libraries.

“There’s some reference works in the depository which are going to come back to Lamont,” she said.

Blair and Cline said the faculty committee knew about the microfilm’s move.

“They don’t necessarily vote everything up or down, but definitely they were informed of it,” said Cline, though she noted that membership turnover on the committee meant some current members might not have been formally told about the change.

The space crunch which precipitated the microfilm’s move may cause further relocations out of Lamont’s basement, officials said, though there are no definite plans yet.

In particular, they cited the possibility of moving the government documents collection out of Lamont’s basement.

“We’re at a point where because space is tight that we’re always evaluating options for the collections,” Cline said. “With all of the collections growing, and with so much material available now in electronic format, it’s really going to be essential for the libraries that we periodically assess what’s located where.”

But Diane L. Garner, librarian for the social sciences, said there are issues beyond immediate overcrowding at stake.

“There’s an inherent tension in the use of the Lamont building between the Harvard users, especially undergraduates, and the space that government documents take up,” she said.

This tension, Garner said, is both pragmatic and philosophical.

Because the government documents collection is a U.S. government library, it has to remain open to the public. But Lamont is primarily intended as a private library for Harvard students.

“It’s hard to control the movement around the building,” Garner said.

This problem is compounded by attention to Lamont’s target audience in the University, she said.

“There’s always been concern that Lamont be a special library for undergraduates, that the focus be on undergraduates and not be diluted by other things,” she said.

And some worry the government documents collection gets in the way of that undergraduate mission. As a result—though officials emphasized that plans were tentative—the documents may clear out to make room in Lamont for more books now held in the Harvard Depository or for cutting-edge multimedia archives.

“One wants to reclaim Lamont for more general undergraduate use or reading use for people in general, so the question is can one find a better place for government documents,” said Pforzheimer University Professor Sidney Verba ’53, who is the director of the University library.

If the government documents do leave Lamont, officials said they would not follow the newspaper microfilm in its hop, skip and jump across Harvard Yard.

“The main reason they couldn’t move to Widener is there’s no space there now,” Cline said. “The government documents collection is an extremely large collection.”

“Frankly, Littauer is the only place I could imagine,” she said.

Verba said such a move would have to wait for some of Littauer’s current contents to move out—a development which he said was “a couple of years down the pipe.”

But Garner questioned the idea that the government documents collection’s role was distinct from that of Lamont as a library for undergraduates.

“It’s perceived that way,” she said. “I’m not sure that it really is. We did a survey of who used it, and approximately half of those who use it are undergraduates.”

Many of those undergraduates, she said, are government or history concentrators researching their theses.

But Garner said she did not think a move to Littauer would hamper College students.

Still, officials stressed that the move to Littauer was by no means definite, and depended in part on how it would impact undergraduates.

“It’s an idea that’s been proposed, but a plan is more than just an idea that gets batted around,” Garner said. “You have to start measuring and speaking to the people who would be affected, and certainly nothing like that has happened yet.”

“I think in general there’s a perception that undergraduates are a nuisance in the library system, rather than an important part of Harvard that needs access to these collections,” he said.

Chopra said he was especially concerned that administrators did not appreciate how undergraduates use the collections which may leave Lamont.

“It’s very heavily used for economics theses because it has all the data,” he said. “Lamont is the one that’s supposed to be the undergraduate library.”

“It’s funny, because the library somehow found a way to pay for new administrative offices that were designed by a world-famous architect,” he said, referring to plans to renovate the Mt. Auburn Street building in the former site of Skewers and the Harvard Provision Company. “But at the same time they’re crying poverty when we ask for more reserves and other things that cost a tiny amount of money.

“What is interesting is that there was talk a few years ago about renovating Lamont and doing more for Hilles, but those were, I think, very empty promises,” Chopra said. “That money seems to have been diverted to new administrative offices and the new reading room at Widener.”