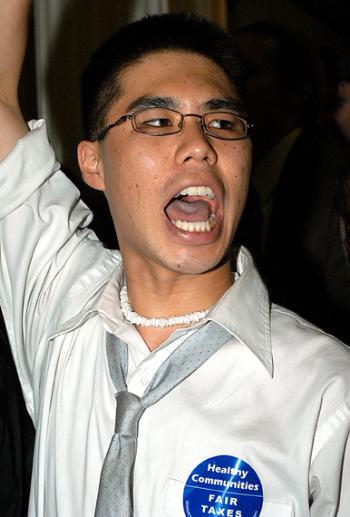 AARON K. TANAKA ’04 leads students in a protest against budget cuts in social services before his arrest Monday at the Mass. State House.
By Simon W. Vozick-levinson, Crimson Staff Writer

BOSTON—A Harvard junior was arrested Monday and arraigned on charges of criminal trespassing the following day after he led more than 20 Harvard students in an act of civil disobedience at the Massachusetts State House.

“This is a really urgent and ugly budget,” Tanaka said. “People are going to be dying on the streets. Our actions need to match the urgency of the situation.”

Monday’s events began with an afternoon rally and press conference in the grand staircase of the State House, organized and led by fiery Boston City Councilor Chuck Turner ’62. After a dozen speakers railed at length against the cuts in social services, the protesters marched up the staircase to the doors of the House chamber where legislators sat in session.

Nearly half an hour of political chanting outside the chamber—kept from invading the legislative room by a velvet rope—was followed by a sudden rush by several protesters past the line. Police quickly restored the border, but not soon enough to stop approximately 25 protesters from taking up positions seated on the floor beyond it.

Of those who staged the sit-in, 18 stayed until they were arrested Monday evening, Tanaka said. He said he was the only Harvard student to be charged.

Tanaka said he and most of the others arrested planned to plead not guilty to their charges.

“We feel that we should not be punished for exercising our constitutional right to free expression,” he said.

Those involved in the protest stressed the critical damage they said the budget would do to social services provided by the state to its least fortunate citizens.

“When 13 out of 18 rape crisis centers, plus the only 24-hour Spanish-speaking hotline, are going to close because of the cuts, that’s really serious, and that’s just one example of the impact they’ll have,” wrote Amee Chew ’04, who was present at the rally, in an e-mail.

Chew said that with the new budget the state was in “a state of emergency.”

Daniel DiMaggio ’04, who also attended the protest, wrote in an e-mail that he came because he thought the legislature which passed the budget was corrupt.

“I think the budget is a sick and craven attempt to balance the tax cuts for the rich and the declining profits of companies on the backs of the poor and the working class,” he said. “I wanted to vent my rage and let them know that there is a solution.”

Tanaka said that Monday was an apt time to make such a statement since the House was preparing to close its current term.

“They’re only accountable to the money that elected them,” he said.

And in the face of such stiff opposition, many were unsure actions like Monday’s protest could have any real effect on the budget.

“We all know how powerless we are,” said Mervyn W. Han ’03, who also participated in the rally. “All we can do is just yell outside, but we don’t have any voice in the decision-making process. We can scream, but it’s not heard by those in a position of authority.”

But Tanaka said that by raising public awareness with the rally, a major goal had been accomplished.

“It’s actions like this—state-wide action—that let our legislators know that this is a serious issue and that something needs to be done,” he said. “I’m not that optimistic about the timing, but I think that with continued persistence we’ll be able to do something.”

Tanaka also stressed that the door was never closed on changes to a passed state budget, as long as the House remained in session.

“They can amend whenever they want,” he said.

And all said that even when the odds looked steep, such protests did not lose their importance.

“It would be terrible if all this happened and nobody said anything,” said Emily P. Schmitt ’04, who was active in organizing the Harvard contingent at the protests but did not herself attend.

Protesters attributed the sizable turnout of Harvard students—including many members of the Phillips Brooks House Association and the Progressive Student Labor Movement—to the direct contact members of such organizations have with the social programs cut by the new budget.

“I think Harvard students in particular are interested in this issue because of our activity in the community and because we see the effect that this is having on the people we interact with every day and on our fellow students around the state,” DiMaggio said.

And Harvard students should be even more concerned about the budget cuts, Schmitt said.

“As college students we often seem removed from politics here,” said Schmitt. “A lot of us don’t vote and don’t plan to be here for more than four years, but it’s important to get invested in the community.”

Tanaka said he didn’t think it mattered if the rest of society thought now was the right time for activism.

“As long as there is a need for social change, it doesn’t matter how cool or fashionable it is,” he said. “We’re doing it our own way.”