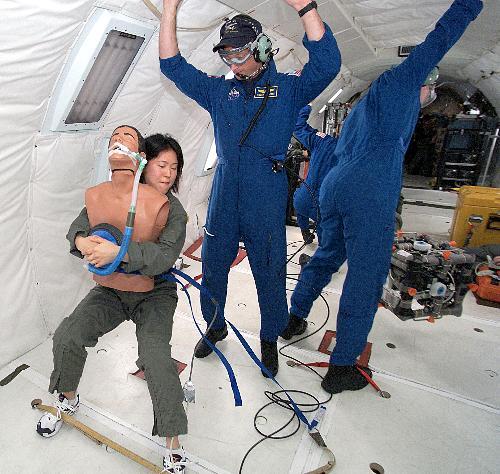 They may not have walked on the moon, but four Harvard students have gotten to float weightlessly and “do Matrix moves” in the air—while potentially changing the way NASA astronauts administer CPR.

So-One K. Hwang ’05, Lily Kang ’03, Mario Garcia ’05 and Manoj Ramachandran ’05 traveled to Houston at the end of July to attend NASA’s Reduced Gravity Student Flight Opportunities Program. Along with teams from other colleges, they conducted a novel scientific experiment in a plane designed to simulate a zero-gravity environment.

They are the first team from Harvard to have taken part in the program, which has been running since 1995. And all four learned about the program through Harvard’s Taekwondo club, of which they are members.

Their instructor, Peter Lee, a student at Brown Medical School, has coached six teams from Brown for the NASA program. He proposed the idea to his Harvard class after practice in the spring of 2002, and the rest was history.

“I figured Harvard was one of the few schools around here that I don’t think has ever participated in the program,” Lee said.

The four were the only ones to sign up, with Patrick J. Lenehan ’05 joining them after several months as part of their ground crew and an alternate flyer.

They dubbed their project—which they conceived in one month last fall—SECURE, or single-rescuer emergency CPR while unrestrained in reduced-gravity experiment.

It was a “logical progression” of tests performed by Brown students in past years, Lee said.

“NASA protocols call for patient and rescuer to be restrained using a system called Crew Medical Restraint System (CMRS),” Lee said. “It takes at least four minutes and more than one person to set everything up. Four minutes is an eternity—the person runs the risk of going brain-dead.”

The Harvard experiment was designed to show that full CPR can be performed on an intubated patient by a single rescuer, with both floating freely. The rescuer would use a “reverse bearhug” position similar to that of the Heimlich maneuver.

The crucial measurements for the unrestrained CPR were the depth of compression and compression to ventilation rate on a test mannequin, Hwang said.

“But even if our bearhug maneuver does not meet [data from restrained CPR procedures], we think that the timely manner in which CPR can be carried out...can definitely potentially change NASA’s protocol,” she said.

Their hope is that on future missions, an astronaut will be able to use their CPR procedure to begin saving a cardiac arrest victim while other crew members ready the CMRS that is already installed on space shuttles and the International Space Station.

The team expects to finish analyzing its data in several weeks, and is optimistic about the results.

All four said the week they spent in Houston, where the Lyndon B. Johnson Space Center is located, was one of the most rewarding educational experiences they have had.

“We got a lot of behind-the-scenes tours of NASA facilities,” Kang said. “We got to see an Olympic-size, 40-foot deep pool that astronauts do dives in. There was a pressurized chamber run, which simulated oxygen levels at 35,000 feet.”

“Being in the South was a shocker for many of us,” Kang, who is from California, added. “We hadn’t had much experience with these wide-open plains and huge pickup tracks and lots of Texan pride.”

On July 25, they received safety lectures and physiological training from retired air force and army personnel, covering topics such as motion sickness and hypoxia, or the loss of oxygen.

And the following Tuesday and Wednesday, they set out on their flight, two team members on each day.

The plane, a modified Boeing 707, is unofficially known as the “vomit comet,” or the “weightless wonder,” as NASA prefers in its press releases.

It simulates a true weightless environment by flying in repeated parabolas, achieving free-fall as it arcs downward at the peak of its flight. The “microgravity” conditions last for approximately 25 seconds, during which all the teams inside perform their tests.

The team purposely trained little in CPR, attempting to reproduce accurate conditions. According to Lee, astronauts often receive several hours of training before going on a mission.

“Everything went extremely well,” Garcia said. “At first it was really weird, because when you’re on earth, you’re just used to walking around. At first, everyone was moving all over the place.”

“I started grabbing onto all sorts of things,” Ramachandran said. “It’s kind of like being underwater, except you can’t swim—you’re just kind of sitting there, and it’s impossible to go anywhere.”

Lenehan, who did not fly but likely will as part of next year’s team, recalled “the faces of my teammates when they came off the plane. It was a mix of pure joy and surprise,” he said.

After returning from the trip, which was funded by the Massachusetts Space Grant Consortium, the students are preparing to present their project to the local community. As part of their project, they are required to conduct outreach, including school visits and speaking to an audience of hundreds at the Museum of Science in Boston.

Several of them said that like NASA, they are enthusiastic about encouraging students to pursue science careers that often seem out of reach.

“People quickly abandon dreams of becoming an astronaut,” Hwang said. “Careers in space are more accessible than most people think.”

—Staff writer Ryan J. Kuo can be reached at kuo@fas.harvard.edu.