Greenhouse Cafe Gets a Face-lift 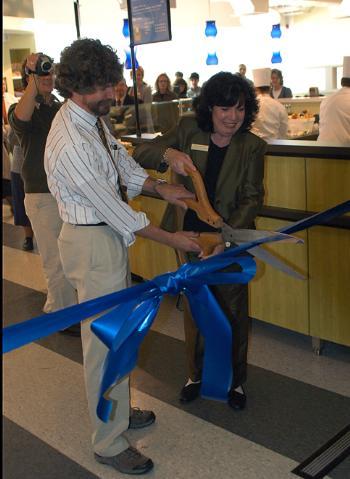 Students craving a Chick-Fil-A sandwich will walk away from the Science Center’s popular Greenhouse Café a bit disappointed, as the chain’s franchise was removed in the eatery’s renovation this summer. But they’ll find in its stead burritos, tacos and a range of other new options.

According to Harvard University Dining Services (HUDS) officials, students and staff crave healthier choices—prompting a complete remodeling of the Greenhouse and the addition of two new graduate student restaurants.

HUDS’ Director for Campus Restaurants Cheryl Walker says the additions and renovations will result in food that is faster, fresher and more ethnic.

The two new restaurants—one at the Medical School’s Longwood Campus and the other housed at a graduate residence at 29 Garden Street—will provide both sit-in and take-out options.

At the Greenhouse, made-to-order salads and fresh fruit smoothies have been added to an existing repertoire of pizza, Starbucks coffee, gourmet sandwiches and sushi.

Catalina Cantina, a new California-style Mexican station, serves easily carried food like tacos and burritos. Other offerings include salads with an ethnic flair from Global Greens and pizza and pasta from Bella Boca—which remains from the cafe’s previous incarnation.

But the loss of Chick-Fil-A has left some students craving one last nugget or sandwich.

“There’s no Chick-Fil A?” questioned a surprised Sam U. Takvorian ’06 “Those are so good!”

Nonetheless, Takvorian said, he was happy with the newest renovation.

The franchise was added to the Greenhouse during a 1994 renovation, when HUDS lauded the company’s signature product—a fried chicken breast sandwiched between two buttered buns with pickles.

“Chick-fil-A is a moist and flavorful grilled chicken product that is marinated for 24 hours,” said then HUDS Director Michael P. Berry.

Project Manager Jack deMelo of Harvard Real Estate Services said that he thought he franchise won’t be missed by students.

“I actually had someone who wanted to talk to the person responsible for removing the Chick-Fil-A,” he said. “She was ecstatic.”

Traditional burgers, fries, and fried chicken are still available in Loker commons, but offerings there have changed too. In response to increasing health awareness, many deep-fried foods will now be grilled.

Loker will also offer a new type of french fry which does not use saturated fat as a coating, said Walker.In addition to menu changes, the Greenhouse’s new layout is designed to provide a speedier experience, said Walker. More two person tables have replaced the larger tables, creating greater seating efficiency.

Also, the replacement of the cafe’s namesake glass wall has resulted in a dining area with more comfortable temperatures for both guests and workers according to HUDS Assistant Director for Residential Dining Bob Leandro.

Buttery 29 at the new 29 Garden Street graduate dorms should open in late October, featuring hot and cold items, and a variety of groceries for students wishing to prepare food in their rooms.

“Each facility is tailored to fit the tastes of the customers,” Walker said.

The new options come at a time when HUDS is carefully weighing its financial decisions as the University faces tight financial constraints.

The Greenhouse is designed to pay for itself over time, Walker said.

“We have spent the last 18 months studying...to develop restaurants that will entice customers now but will also provide financially viable solutions for the long term,” HUDS Executive Director Ted A. Mayer said in a press release.

HUDS will be providing free samples all week long to entice customers to check out the new offerings.