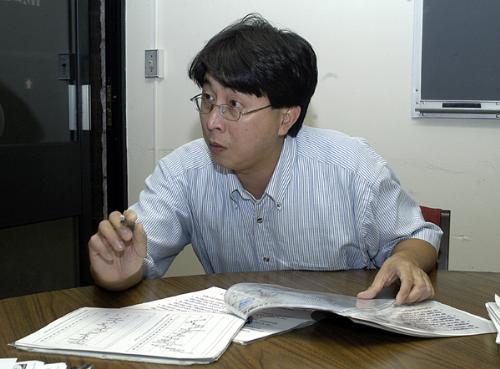 WILLIE SOON, a Harvard scientist and the author of a controversial study denying that there has been global warming in the 20th century, shows data defending his research yesterday.
By Irene Sanchez, Contributing Writer

A study by two Harvard researchers quietly published last January in a small research journal has set off a political storm that has led to debate on the senate floor and internal wrangling at the Environmental Protection Agency (EPA).

The study, co-authored by two scientists at the Harvard-Smithsonian Center for Astrophysics, concluded that the 20th century has been neither the warmest century of the past millennium nor the one with the most extreme weather.

Disbelievers in global warming—the widely-accepted scientific theory that the earth has grown incrementally hotter over the past century, in large part due to pollution—have used the study to bolster their case.

But a large number of scientists have criticized the study’s methods and pointed to ties between the oil industry and the study’s authors, Willie Soon and Sallie Baliunas.

Approximately 5 percent of the study’s funding—about $53,000 in all—came from the American Petroleum Institute, the gas and oil industry’s main trade organization.

Both Soon and Baliunas are paid consultants for the George C. Marshall Institute, a Washington non-profit organization that opposes limits on carbon dioxide emissions.

Four editors have resigned from Climate Research, the small journal that initially published the study. According to The New York Times, even the publisher of the journal, Otto Kinne, has criticized the study.

“I have not stood behind the paper by Soon and Baliunas,” Kinne said, according to the Times. “Indeed: the reviewers failed to detect methodological flaws.”

But despite wide debate in the scientific world over the study’s legitimacy, the research has become a hot document in Washington.

According to internal EPA documents leaked to the national media, the Bush administration tried to include references to the study in the agency’s report on the state of the environment.

To block this move, EPA staffers deleted the global warming section from its report.

The research also caught the eye of Senator James Inhofe, R-Okla., who chairs the Senate Environment and Public Works Committee, which copied and distributed the work.

He called for a hearing in late July to debate the issue, and praised the study’s findings in his opening remarks.

“The 1,000-year climate study that the Harvard-Smithsonian Center for Astrophysics has compiled is a powerful, new work of science.  It has received much attention, and rightfully so,” Inhofe said. “The powerful new findings of this most comprehensive of studies shiver the timbers of the adrift Chicken Little crowd.”

Professor Michael Mann of the University of Virginia, who testified before the Senate Committee, denounced the study in an interview yesterday.

“Serious scientists will tell you over and over again that this was a deeply flawed study that should never have been published,” Mann said. “Scientifically this study was considered not even worthy of a response. But because it was used politically, to justify policy changes in the administration, people in my field felt they had to speak out.”

“My impression is that the critics are right,” said John Holdren, Heinz professor of environmental policy at the Kennedy School of Government. “It’s unfortunate that so much attention is paid to a flawed analysis, but that’s what happens when something happens to support the political climate in Washington.”

Professor Daniel Schrag of the Department of Earth and Planetary Sciences said that he did not think Soon and Baliunas’ approach to finding a global average temperature was as honest as other approaches.

“The bottom line is that this paper is suggesting that the unusually warm weather we’ve been having for the last 100 years is part of natural variability,” he said. “We have observations to show that that’s not the case.”

The Harvard-Smithsonian Center for Astrophysics’s director was on vacation and could not be reached.

Soon would only discuss the science—not the politics—of the report for this article.

But he did defend his scientific position.

“I don’t want to say any harsh words,” Soon said. “I just say this: the key point is to encourage more research.”