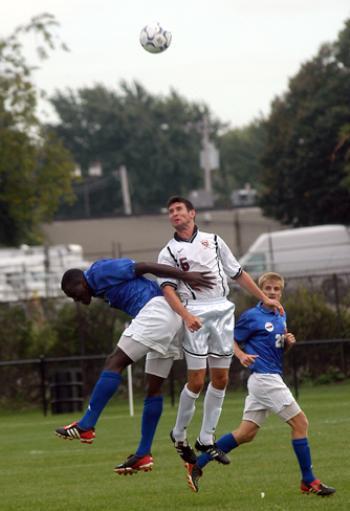 Captain ANDREW OLD (5) elevates to win a head ball against URI yesterday.
By Evan R. Johnson, Special to the Crimson

BURLINGTON, VT.—Things looked bleak for the Harvard men’s soccer team heading into the closing minutes of the first half of its home opener against the University of Rhode Island yesterday.

Trailing 1-0 to an opponent that had defeated it 5-1 last year and still scoreless nearly 150 minutes into its season, the Crimson seemed to be missing all the breaks that could have led it to an easy victory.

But senior midfielder Kevin Ara changed all that with a free-kick blast from 21 yards out with 4:10 remaining in the first half. Ara thundered the ball past both the URI wall and the outstretched hands of diving keeper Michael Charles to knot the game at one apiece.

Harvard broke the tie later in the game on a header by freshman forward Matt Hoff to take the 2-1 win.

The victory improved the Crimson’s record to 1-0-1 following a scoreless tie with Vermont Friday afternoon.

Entering yesterday’s contest against the Rams (1-4-0), Harvard was eager to release the pent-up anger that had been building since the 2002 meeting.

“[Revenge] was big talk in the locker room,” said Hoff, whose game-winning score was his first collegiate tally. “[We wanted to make sure it was] not a repeat of last year, which it wasn’t. After that tie in Vermont, we really needed a win.”

Hoff’s tally came with just 17:06 remaining in regulation and was assisted by senior Spencer George.

George played a one-two with Hoff in the corner, taking the pass from Hoff and beating his man before laying the ball up in the center of the goal box for the freshman to knock into the back of the net.

Despite taking the lead for the first time with just a few minutes remaining in the contest, Harvard chose to go on the attack rather than play conservatively.

George nearly scored again with 2:20 left after juking several defenders, but his shot from inside the box banged off the post and bounced harmlessly away from the goal.

Yet it was Ara—whose nine goals last year led Harvard—who had the prettiest shot of the day.

The opportunity came on a free kick which was either too close or too far away for any of the Crimson’s designed plays to work.

“Kevin looked over and said it was too far [to try a set play] and ‘I’m going to have a go,’” Harvard coach John Kerr said. “There were too many players in the wall and Kevin read that the goalie was screened, so he just hammered it as hard as he could and hit the side netting. It was wonderful.”

Though morale was high after the game, the Crimson came close to losing one of its key senior leaders in the waning seconds of the match.

“He came from behind and scissored my legs,” George said. “I’m glad he didn’t do it harder because that’s how guys break their legs.”

Though both the Crimson and the Catamounts (0-2-3) played very strong defensive games, neither side was without near misses.

Harvard’s best scoring chance came when sophomore Brian Charnock was taken down from behind inside the box with 14:06 remaining in the game.

The save was just one of Sullivan’s seven on 18 shots. Junior Conrad Jones was also remarkable in goal, saving five of 16 shots.

“On another day, that could have been a 3-0 win,” Kerr said. “We did hit the crossbar, had a Matt Hoff goal called back and then we a missed penalty.”

The 2003 game was far less satisfactory than last season, when Harvard demolished the Catamounts 4-0.

But this season Vermont came into the game on a high, having tied then-No. 8 North Carolina.

Harvard will look to extend its undefeated start when it hosts Fairfield Wednesday at 3:30.