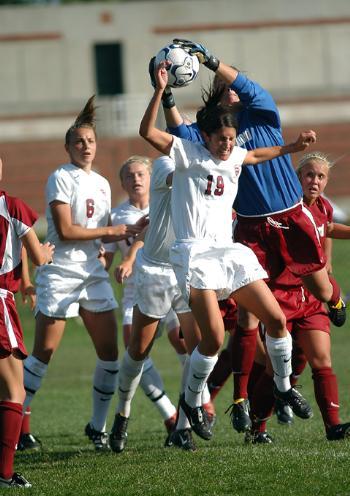 The longer the Harvard women’s soccer team’s matchup with traditional powerhouse Stanford remained scoreless, the greater the likelihood became that one lucky bounce would give the Crimson the win.

But it was the Cardinal that ultimately got that bounce.

Just 1:17 into the second half—and her outing—sophomore goalkeeper Maja Agustsdottir couldn’t corral a bouncing ball. While Agustsdottir attempted to fall on the rebound off her chest, the Cardinal’s Brittany Oliveira pried it loose and slid it into the gaping net, sending Stanford on its way to a 2-1 win over the Crimson (1-2) in the first round of the Harvard Invitational.

“We didn’t pull ourselves back in [to the game] after that,” sophomore midfielder Allison Kaveney said.

But it wasn’t for lack of trying. As Agustsdottir kept the score close with a pair of impressive saves, the Crimson sent through ball after through ball past the Stanford defense. Yet it was unable to manage a single shot on goal as the Cardinal (2-2) increasingly withdrew into its defensive third.

Then, with just over 17 minutes left, Stanford again capitalized on a rebound to score an insurance goal. Agustsdottir deflected a low shot, but the rebound bounced away and Jennifer Farenbaugh nodded it over Agustsdottir for a 2-0 lead.

“We had a couple of lapses in the second half and we lost a little faith,” co-captain left back Caitlin Fisher said. “It was a frustrating game because [the goals] were just two dinks.”

Harvard did manage to pull within one goal with under two minutes remaining as Fisher took a pass from co-captain Katie Hodel, beat a defender and sent a perfectly-placed cross that senior forward Alisa Sato headed in, but the Crimson was unable to regain possession before time ran out. Harvard coach Tim Wheaton had moved Fisher forward in an effort to get the Crimson on the board.

“Caitlin was a force throughout the game,” Kaveney said.

Fisher had been required to leave the field earlier in the half after play was stopped when she injured herself in a collision with a Stanford player, but returned immediately.

Early in the game, Harvard demonstrated that it belonged on the same field as the Cardinal with its impassioned play.

“We came in with the attitude of underdogs,” Fisher said. “We had everything to prove. We stayed confident and had lots of opportunities.”

The best of those came in the 33rd minute when Sato found senior midfielder Katie Westfall open 25 yards out, but Westfall’s shot sailed high.

The Crimson could manage only three shots on net all afternoon against goalkeeper Nicole Barnhart, who competed for the Under-21 U.S. National Team over the summer.

Barnhart’s first-half counterpart, sophomore Katie Shields, kept the score even with three saves of her own.

“Katie controlled the game out there,” Kaveney said.

Consistent with what has become customary for Harvard, Agustsdottir replaced Shields at halftime.

With time winding down and the Crimson’s desperation growing as Stanford defended with more passion, the contest became increasingly physical.

Despite the loss, the Crimson players were upbeat about staying so close to one of the top teams in the nation.

“We know we can compete against anyone,” Kaveney said. “We just need to find that extra something to put us over the top.”

Fisher was especially emboldened by her team’s ability to dictate its own style of play.

“It’s all on our shoulders,” said Fisher. “We know now that no other team can control how we play. It’s all on us.”