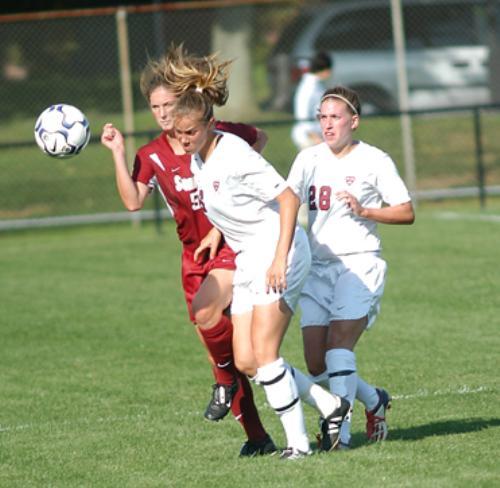 Junior central defender LIZA BARBER (6) and freshman right back LAURA ODORCZYK (28) helped keep Maine away from the Harvard goal and off the scoreboard.
By Timothy J. Mcginn, Crimson Staff Writer

Despite seizing the lead in the opening minutes of the first half when sophomore Allison Kaveney took a pass from co-captain left back Caitlin Fisher and sent a left-footed blast off the post and into the net, the Harvard women’s soccer team certainly did not control the momentum midway through the first half in its Harvard Invitational matchup yesterday against Maine.

A hungry and aggressive Black Bear attack pushed the Crimson defenders towards their own goal mouth while the Maine fullbacks sealed off the pitch at midfield, halting Harvard’s advances.

But a single misstep by the Black Bear goalkeeper changed the game’s course and triggered a Crimson offensive explosion that ultimately led to a 3-0 victory.

With just over 15 minutes remaining in the first half, Harvard (2-2) broke Maine’s defensive choke hold, squeezing the ball past defenders who had until that point—with just the lone exception—snuffed out the Crimson offense, and raced up field toward goal.

Senior midfielder Katie Westfall sent a ball behind the Maine defense. When Black Bear goalkeeper Tanya Adorno came out to play it, she saw a defender racing back. Seemingly confused, Adorno skidded right by the ball on the grass dampened by the early afternoon rainfall.

That left junior forward Emily Colvin with an empty net, and she calmly knocked the ball into the far side for a 2-0 lead with 14:08 to go in the half.

“It was a gift with a wide-open goal,” Colvin said. “But it was also a beautiful ball from Katie. I was wide on the weak side, and she hit a through ball. The defender and the goalie were sort of there but had a miscommunication, so it was just me and the goal.”

The assist was the 24th of Westfall’s career, tying her with Kelly Landry ’85 for fourth all-time at Harvard.

Though visibly frustrated by the sudden change of fortune, Maine (4-1) continued to battle, but the extra spring in the Black Bears’ steps—previously supplying the edge necessary to win challenged balls on long runs—was gone.

Harvard reached more of the balls sent over the tops of defenders and escalated its assault on goal.

“We’ve been working on fitness a lot,” junior Alisha Moran said. “We had fitness tests coming in that everyone worked really hard to pass over the summer. We’ve continued to keep it up.”

The Crimson maintained that pressure early in the second half, controlling long passes and catching the defense unprepared.

With Harvard’s quick slashes through open passing lanes and breaks in transition, the Maine defense was overwhelmed.

Soon, Adorno was, as well.

Five minutes after halftime, senior forward Alisa Sato threaded a pass through the defense, catching Moran perfectly in stride. With a fake to shake off her two markers, Moran found daylight with the goal straight in front of her.

As Adorno came off her line to challenge her, Moran niftily flicked the ball over the goalie, tucking it under the crossbar to seal the victory.

“It was a fifty-fifty ball that I won,” Moran said. “I took a left-footed shot and it went over the keeper and in. She probably could have saved it if she had been back a little farther.”

At the other end of the field, sophomore goalkeeper Katie Shields preserved the lead with several stellar saves, particularly during the middle of the first half, when Harvard seemed most vulnerable.

With 17 minutes remaining in the first half and the Crimson only leading by one, the Black Bears managed to slip a low cross into the center of the goalmouth. In the confusion, Maine got off a shot low and to Shields’ left.

With a perfectly timed dive, Shields eliminated the threat and temporarily relieved the pressure on goal.

After such a difficult save, protecting the goal would only get easier for Shields.

The Harvard defense suffocated the Black Bears’ once-potent attack, allowing few good looks at the goal and forcing several long-range, easy to handle shots that never threatened the net or the lead.

And on the one occasion that Shields was beaten, the defenders in front of her slipped behind to protect the shut out.

Off a corner kick, the Black Bears gained possession in front of the goal and quickly took aim at the inside of the right post. Denying what appeared to be a certain goal, sophomore midfielder Maile Tavepholjalern stood fast and headed the ball to safety.

Harvard travels to Hanover, N.H. this Friday to face Auburn in the Dartmouth Invitational at Chase Field.