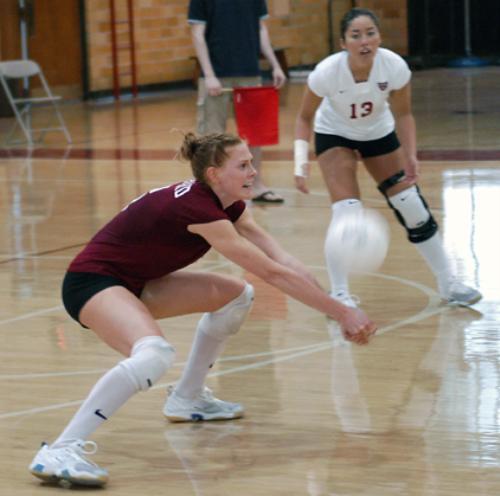 The Crimson dropped the first two games of its season in this weekend’s New England Invitational, but recovered to beat Colgate 3-0.
By Carrie H. Petri, Crimson Staff Writers

As the Harvard women’s volleyball team lost two of three matches in this weekend’s New England Invitational, all last year’s Ivy League player of the Year Kaego Ogbechie could do was watch from the sidelines.

“It’s extremely difficult not to be able to jump in,” said Ogbechie. “It’s so different seeing everything from the outside, like seeing a ball about to drop and knowing that you can’t do anything about it but yell.”

Ogbechie was sidelined with patella tendinosis—an injury that stemmed from a fall she took in competition last spring.

“I spent the summer working on [the knee] and rehabing it,” Ogbechie said. “During the preseason we were going double-days and it got a little bit swollen, irritated and tender. I’m probably out for...I don’t know yet.”

In Ogbechie’s absence, the Crimson (1-2) dropped five-game matches to Towson and Furman, but dominated Colgate, as freshman middle hitter Katie Turley-Molony stepped in for Ogbechie and showcased her abilities. Turley-Molony finished third on the team in hitting percentage, connecting on 24 percent of her kill attempts.

“She did awesome,” coach Jennifer Weiss said. “It’s hard to step in as a freshman, but she did exactly what we asked of her in terms of what we were trying to run with regard to our offenses and defenses.”

Despite playing 10 games in 24 hours compared to the Colgate’s six games, the Crimson showed no signs of fatigue and never gave Colgate a chance, coasting to a 3-0 (30-25, 30-17, 30-19) win for its first victory of the season at the Malkin Athletic Center on Saturday night.

After winning the first game of its two earlier matches in the tournament, Harvard had been struggling to keep up in the second games. Saturday night’s performance, however, proved that the Crimson could follow through.

“Once we got a feel for them, we kept going. We didn’t have as many ups and downs,” Turley-Molony said. “We knew we could play even better in the second game.”

Turley-Molony had 10 kills, recording double-digits for the first time in her collegiate career.

“We focused on getting into position, executing our play, and staying in our system,” Harvard coach Jennifer Weiss said. “It’s really important to play up a level against a team you know you can dominate.”

The explosive second game was definitely a demonstration of domination. The Crimson opened a 16-6 lead behind a 10 point serving run by senior outside hitter Nathalie Miller.

The Harvard defense then did not allow the Raiders a kill for 31 points. In fact, Colgate had a measly hitting percentage of .119 compared to Harvard’s .360.

Miller had another service run later in the game with three aces in a row.

Junior outside hitter Nilly Schweitzer had three straight kills to close out the second game. She led the Crimson with 17 kills for the night and also led the team with eight digs on defense.

The first game had not been nearly so one-sided. With the score knotted at 15-15, it looked like the Raiders might win their first game of the season. But Harvard finally broke away to a 25-20 lead behind the blocking of senior middle hitter Mariah Pospisil.

That was the closest Colgate would get for the rest of the match.

In the third game, the Crimson jumped out to a 15-5 lead. Harvard showed its depth as the reserves took the court and never let the Raiders back in.

Freshman setter Sarah Cebron had an ace in her first appearance for the Crimson. Sophomore outside hitter Julie Marvin also came in to serve.

“They were really mentally prepared, and that helped a lot,” Miller said. “They came in and were ready to go.”

A 7-2 Lady Paladin run broke open a deadlocked fifth game and Harvard was unable to recover as it dropped the tiebreak. Furman outside hitter—and reigning Southern Conference Volleyball player of the week—Amber Montague registered four kills and a block in the fifth game as the Lady Paladins (4-5) wrestled the match away from the Crimson.

Schweitzer propelled Harvard into the tiebreak with a clutch kill followed by an ace. The Crimson had a 27-22 lead in the fourth game and seemed on its way to coast to victory. However, Furman ran off five of the next six points—three of which came off Harvard miscues—before the Crimson shut the door 30-27.

The strong performance in the fourth game was an emphatic response to games two and three which the Lady Paladins dominated.

“We pretty much said we’re better than this and let’s pick it up,” said Pospisil. “And we definitely did.”

Harvard fell behind 21-13 in both games two and three. The Crimson could not overcome either deficit falling 30-26 in game two and 30-22 in game three.

“They actually played at us a little more,” said coach Weiss. “We didn’t react right away to that.”

Harvard converted on an astounding 44 percent of its kill attempts in game two. However, the team posted a 19 percent accuracy for the match.

Harvard’s clutch performance in game four came on the heels of a heartbreaking game three loss. Leading 27-23 in the third, the Crimson dropped five of six points, knotting the score at 28. After Tiger middle blocker Julia Fredrickson’s serve went long, the Crimson had an opportunity to serve for the game. However, Towson blocked a Harvard kill attempt and then registered two kills of its own to take a 2-1 lead in the match.

The Crimson pulled out a tight first game by taking seven of the final eight points and benefitted from three Tiger errors during that stretch. Harvard failed to capitalize on the momentum in the second as it fell behind quickly and could not get within four points.

Blocks proved to be the crucial statistic in the match. The Tigers used their size advantage to gain a 15-8 edge in blocks and disrupt the Crimson’s attack, which connected on only 17 percent of its kill attempts for the match.

“They were definitely a big team, and that really makes our defense and our blocking all the more important,” junior setter Kim Gould said.

Gould had a solid performance stepping into the role previously filled by current assistant coach Mindy Jellin ‘03. She registered 42 assists and led the team in aces with four.

“It was really exciting and I felt pretty comfortable,” said Gould. “Everyone’s really supportive on the court, and I think we’re working together really well.”

—Staff writer Michael R. James can be reached at mrjames@fas.harvard.edu.